The architecture of mosques in Iran is a combination of symmetry, geometric designs, and vibrant colors creating an astonishing view which no one can forget easily. in other words, Mosques have been the place of worship, so you need to dress modestly and be respectful when you want to enter these holy places. Here are the most amazing Persian mosques you have to visit when you travel to Iran.

You can join our team, Iran Destination, and get more acquainted with Iran tour and all of the tourist attractions and all the requirements to travel to Iran. Iran travel agency, Iran Destination, will organize your trip to Iran. You can offer your tailor-made trip to Iran or visit our programs on the Iran tour page. You can contact to our Iranian travel agency, our agents are online to answer all your questions about iran travel. visit Iran is a good choice to get Iran travel services such as hotels in all cities, Shiraz hotel, Tehran hotels and all services about Iran tourism. Also, you can check out our Facebook, Twitter and our weblog for more info.

most importantly, This is probably the first image coming to your mind when we talk about Iranian mosques. Many people know Nasir ol-Molk mosque as the Pink mosque because of its rose-hued pink tiles. When you are in Shiraz, you must spend a morning in the pink mosque, because during mornings the light passes through the stained-glass windows and you can see a great manifestation of color and light on the Persian rugs on the ground. Here absolutely is a place for whom to like photography and like to have a special pictures.  To read more about this mosque read our article about Nasir al-Molk mosque.

Isfahan known for its Islamic architecture. in addition, One of the astonishing mosques around Naqsh-e Jahan square is Shah Mosque. It is famous for its blue-hued tiled walls with Islamic calligraphy open Iwans, symmetrical arcades and special acoustic properties. moreover, dome is the most interesting aspect of this mosque for the visitors. This is one of the Must-Sees in Isfahan. If you like to know more about this mosque, you can click on our article about Imam Mosque. 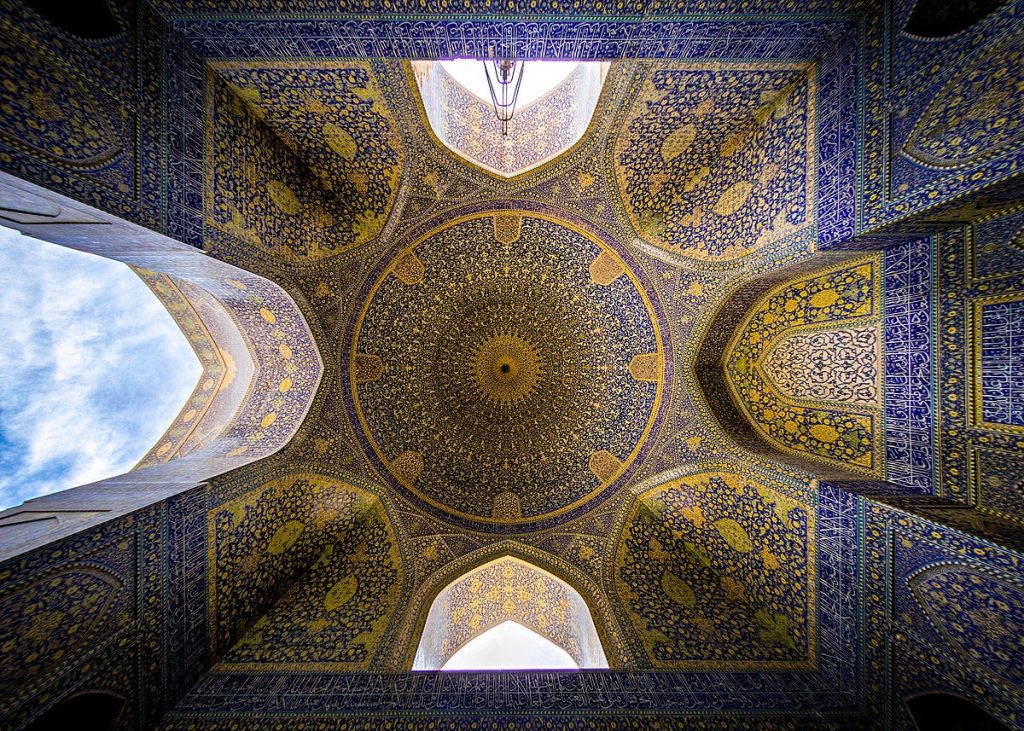 Above all, Vakil mosque built over a 20-year period in the 1700s. Traditionally, Iranian mosques had four halls, but Vakil mosque has 2 and its 48 pillars make it really spectacular. also, This mosque is so vast that it  sometimes call “stone forest”. The unique feature of Vakil mosque is its Minbar, the pulpit from which an Imam speaks. A single solid piece of green marble carved on it ! This mosque is located in the historical center of Shiraz. So, you can visit many places near each other. 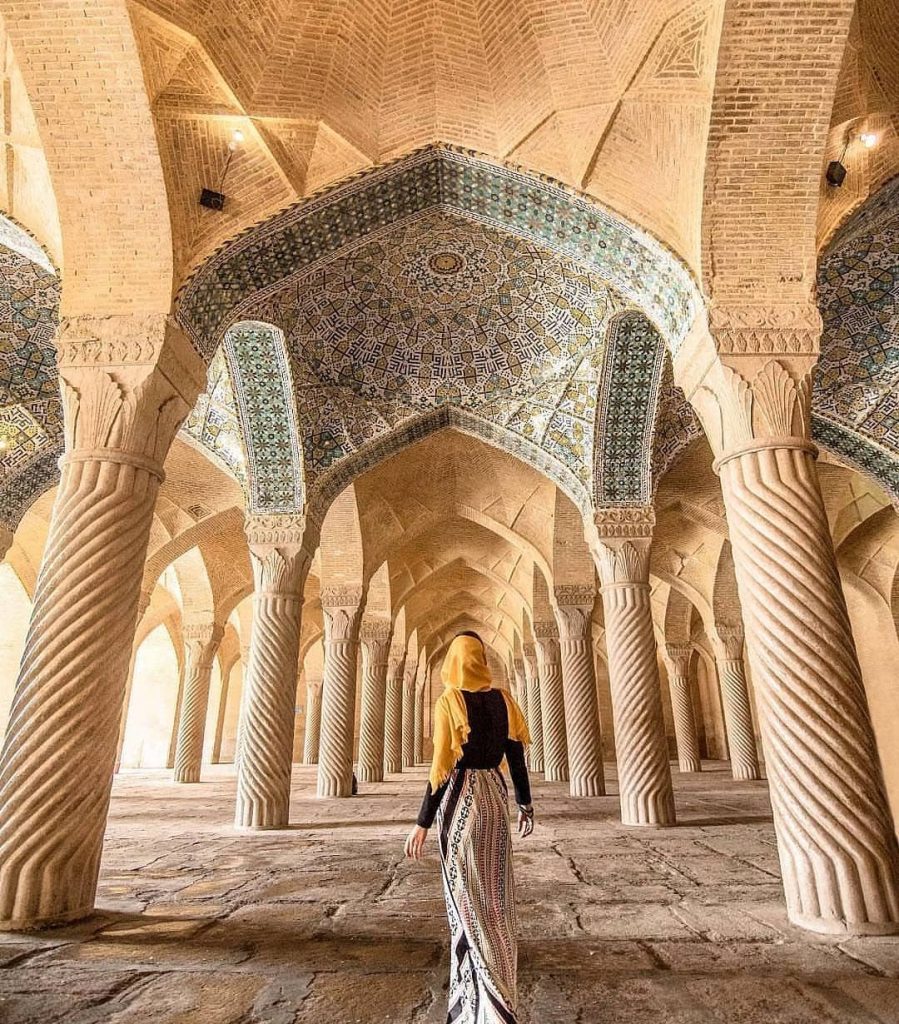 Jaameh mosque of Yazd  also call the Friday Mosque and it is mostly known for its two tall minarets of 52 meters! These are the highest minarets in Iran.  this mosque belongs to 12th century. The main structure of this mosque belongs to Sassanid era, but the whole mosque was built around 100 years. in addition, The exquisite calligraphy and complex geometric patterns create a great view of outside, while the interior part is full of honeycomb tiles, Kufic script, and plaster work, all of which lead to the dreamy star-filled dome. The most important features of this mosque, which attract so many tourists every year, are as follow:

The oldest architecture of its kind

Indirect light in the mosque 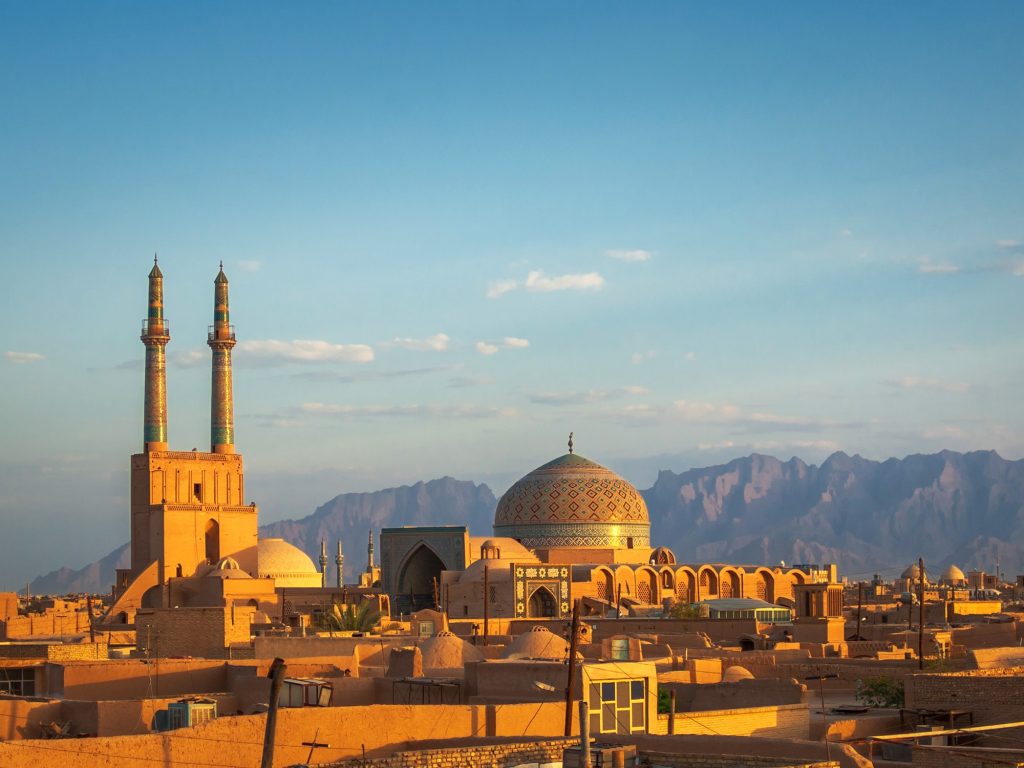 certainly, One of other eye-catching mosques around the Naqsh-e Jahan square, in Isfahan, is Sheikh Lotfollah Mosque, the unique feature of which is the lack of minarets and its off-center dome. moreover, This mosque stands strong since 1619. also, The cream-hued tiles shift their color when the sun moves throughout a day and the color gets pinkish at times. When you go inside under the dome, the height and the delicate hypnotic blue and yellow patterns will definitely surprised you. Professor Arthur Upham Pope wrote in his “A Survey of Persian Art” that this mosque can be hardly considered as a work done by human hands! To learn more about this beautiful mosque, read our article on Sheikh Lotfollah Mosque. 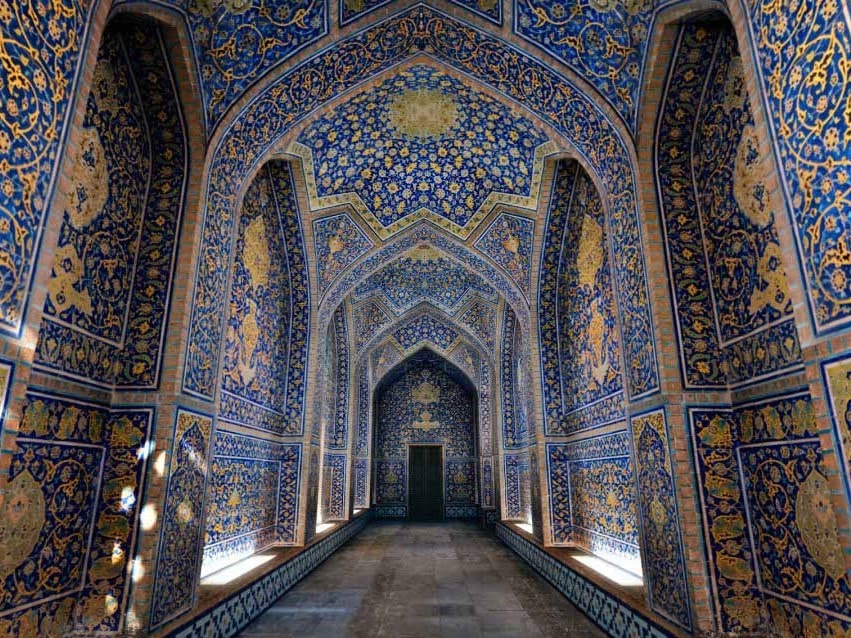 Above all, Sheikh Safi ol-Din Ensemble was registered on UNESCO World Heritage Sites list in 2010. These buildings built from 16th to 18th century. This ensemble includes a collection of monuments of princes and emperors of Safavid Empire. the seven stages and eight attitudes of Sufi mysticism in its architecture also represent. further, The tomb of Sheikh Safi has been constructed like an octagon, and the dome known as “Allah, Allah” is placed on the top of it.
The most important parts of this collection are: 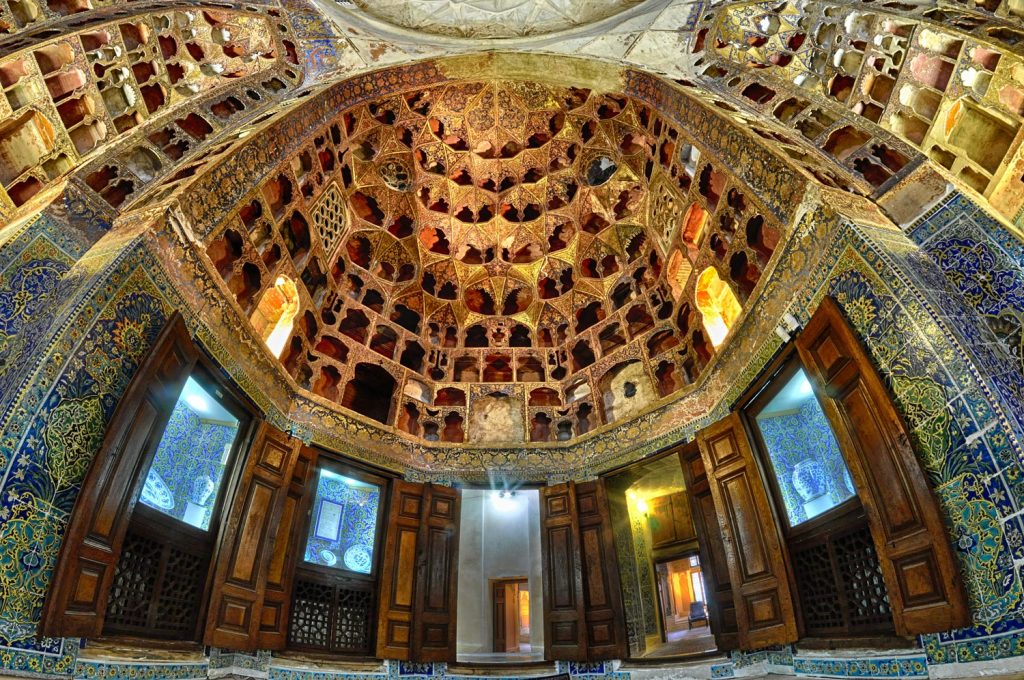 You may already know that Kashan is famous for its historical houses. moreover, In the historical neighborhood of Kashan, you can find an amazing Qajar mosque called Agha Bozorg Mosque. in addition, This is one of the places you must see when you visit Kashan. Agha Bozorg Mosque is a brick mosque with intricate for example,  woodwork, plaster works, mirror-works and also geometric tiles. It has such a relaxing atmosphere, letting you spend some time with your thoughts. 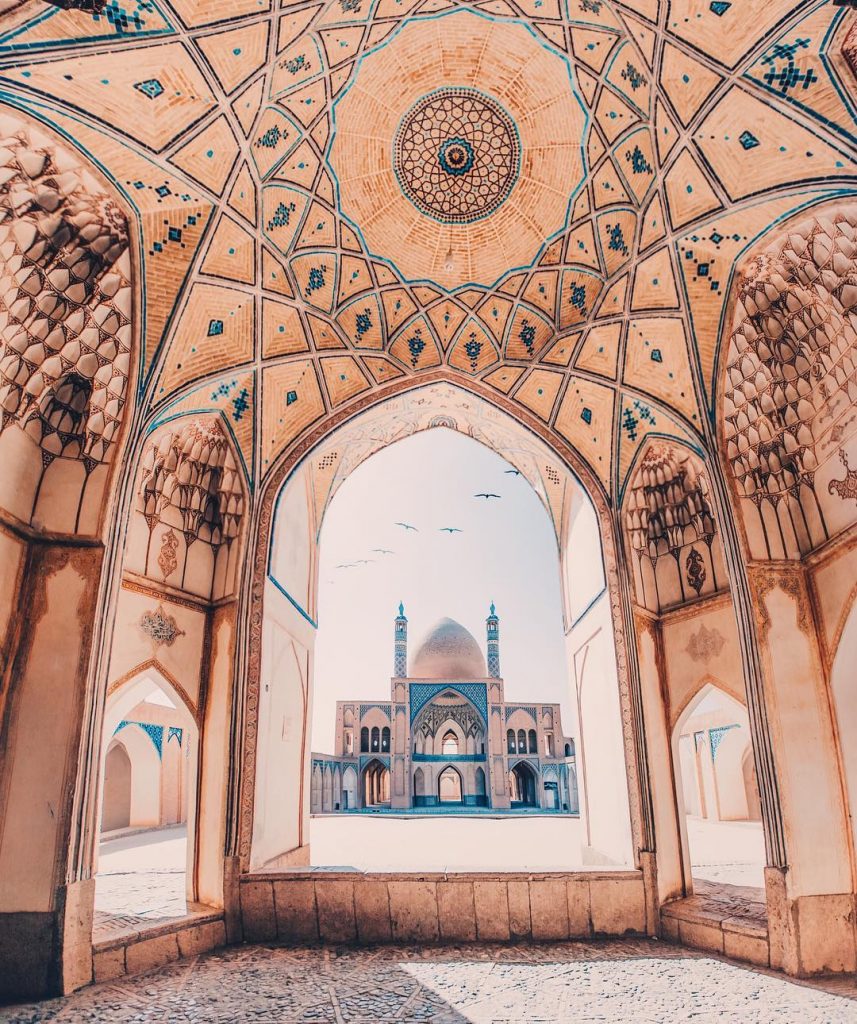 Empress Goharshad, the wife of a Timurid ruler in 15th century, ordered to build this mosque. Also, It has been once a free standing mosque, but now it is encompassed within the holy shrine complex of Imam Reza. also, Its azure dome creates a beautiful view in contrast to the golden dome of Imam Reza holy shrine. subsequently, This is one of the exceptional examples of Islamic architecture for sure. 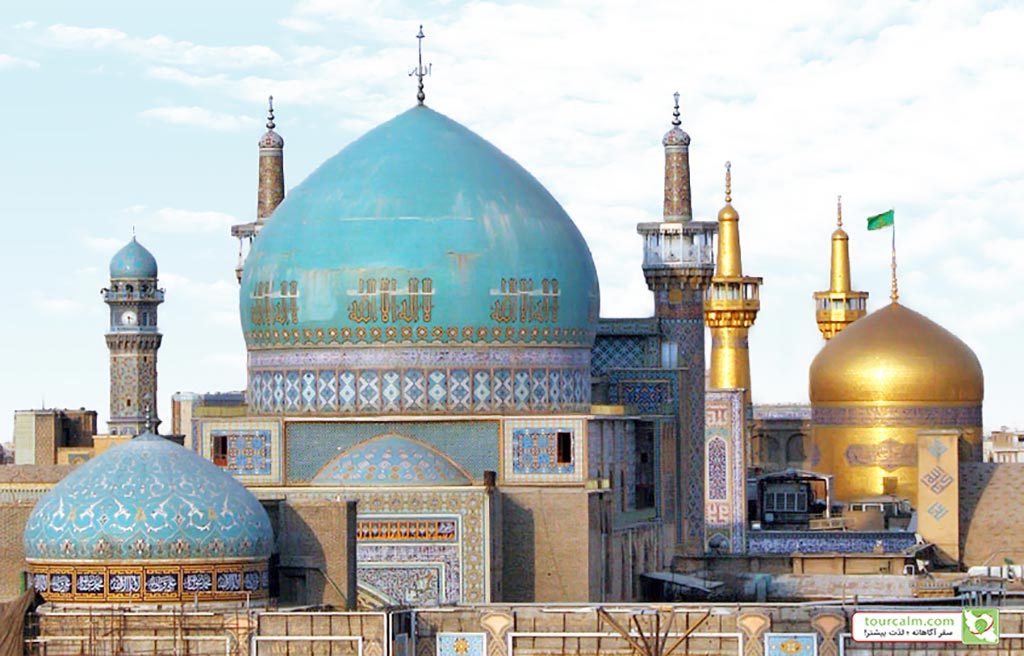 Goharshad. the most beautiful mosques in Iran

Certainly, Blue mosque known as the Turquoise of Islam because of its nice blue tile works. There are some scars on it from the damages of a massive earthquake in 1779, but it is still standing strong. Furthermore, Jahan Shah built this mosque  in 1465. it is a member of a larger complex. Of all the buildings in this collection, just the blue mosque remains now. 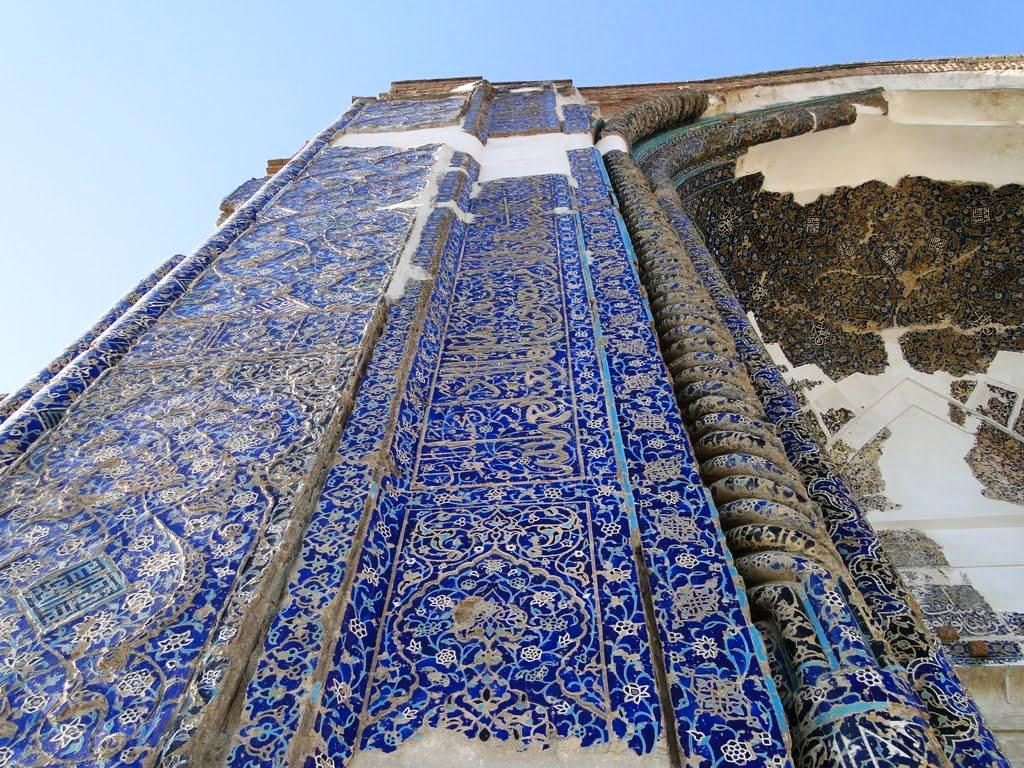 Saffarid Amroleiss conquered Shiraz, they built this mosque to celebrate their conquest in 276 AH. Many great travelers in the history have written about this mosque, like Bin Battuta and Madame Dieulafoy. Meanwhile,  a building is in the courtyard and call Darul-Mos’haf (House of Quran). also, It is made of stone and plaster. It was first built for preserving copies of the Holy Qur’an, But later people used it to practice their Haj processes. 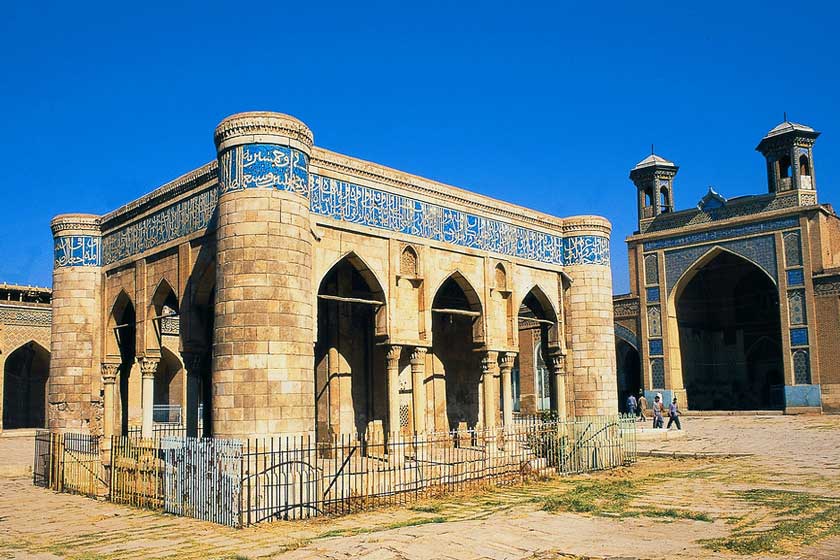 In conclusion, You can visit any of these beautiful mosques in Iran through our Iran Package Tours. Travel to Iran with Iran Destination and you will miss nothing. our Iran Tour Operator is ready to hear your comments and ideas and also if you have any special plan in your mind regarding an Iran tour. so don’t hesitate to contact us.