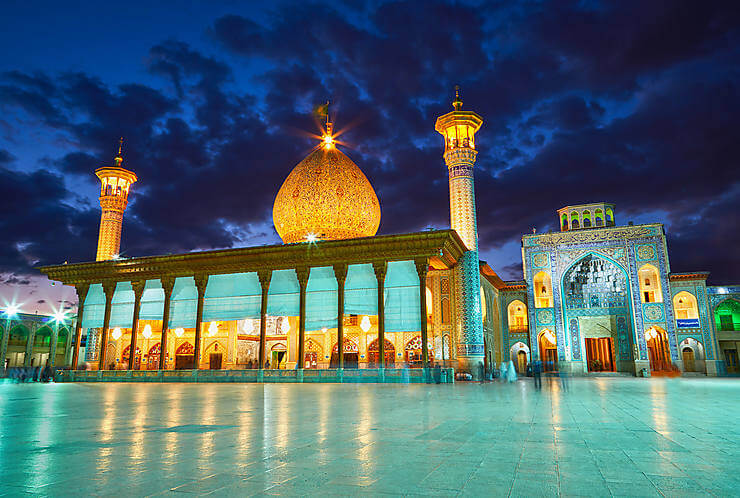 Mir Seyyed Ahmad is the main shrine mausoleum in Shiraz; he is the son of Seventh Imam, Mosa Kazem (AS) known as Shah-e-Cheragh. It is located near a new mosque in Shiraz.

Seyyed Mir Ahmad, between the years 1434 to 1435 BC, during the reign of Mamoon, decided to leave Fars and Shiraz towards Khorasan for visiting his brother Imam Reza.  But he was killed and Buried in Shiraz. The Third respectable pilgrimage destination In Iran is Shah-e-Cheragh, After the shrines of Imam Reza in Mashhad and Fatima in Qom.

The tombs became celebrated pilgrimage centers in the 14th century.  When Queen Tashi Khatun erected a mosque and theological school in the vicinity. Ayatullah Dastghā’ib has found this site according to the nature of this place. He saw a light from a distance and decided to investigate the source and so he found that the light emitted by a grave within a graveyard. After that, the grave excavated and a body wearing an armor discovered. The body was wearing a ring saying al-‘Izzatu Lillāh, Ahmad bin Mūsā, meaning “The Pride belongs to God, Ahmad son of Musa.

Moreover, the site is the most important place of pilgrimage within the city of Shiraz. Also, during the  Zengid Dynasty(~1130s AD), the chief minister to the monarch by the name of Amir Muqarrab al-din Badr al-din built the tomb chamber, the dome, as well as a colonnaded porch.

After that Queen Tash Khātūn (the mother of Shāh Abū Ishāq Injū) during the years 1344-1349 (745-750 AH) further work initiated for the mosque. Besides, she carried out essential repairs, constructed an edifice, a hall of audience, a fine college, and a tomb for herself on the south side.

Also, she presented a unique Qur’an of thirty volumes, written in golden thuluth characters with gold decoration, in the style of the calligraphist of that period, Yahya Jamali. Besides, nothing now remains of the buildings set up by Queen Tash Khātūn, but the Qur’ans have remained and are preserved in the Pars Museum.

Moreover, the mosque again underwent necessary repairs in 1506 initiated by the guardian of the mosque at the time, Mirza Habibullah Sharifi. Also, the mosque was again repaired in 1588 (997 AH) when half of the structure collapsed as a result of an earthquake.

In addition, during the nineteenth century, the mosque damaged several times and subsequently repaired. Furthermore, in 1827 (1243 AH), Fat’h ‘Alī Shāh Qājār presented an ornamental railing for the tomb. Besides, another earthquake shook the mosque in 1852 (1269 AH), and Muhammad Nasir Zahir ad-Dawla repairs it.

Finally, the late Nasirol’molk repaired the dome, but on account of the numerous cracks, in 1958 the whole dome  removed, and in its place an iron structure, which was lighter, and likely to last longer, in the shape of the original dome, made at the cost of the people of Shiraz.

Shah-e-Cheragh shrine is located in the good position, near to Qajary and Zandiyeh Complexes, from the middle of complex, Visitors are welcome to enter the courtyard and to take discreet photographs (no large cameras or tripods), No tourists are also allowed to enter this place. Women must wear chador within the whole shrine complex (available for free at the women’s entrance). 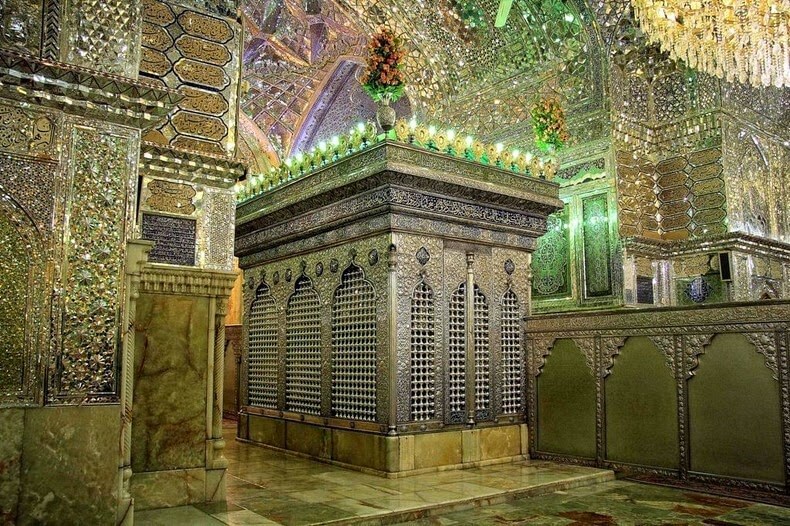 The shrine has the Shirazi structure as a bulbous dome. It is decorated by mirrors work and four slender wooden pillars that boast near-perfect proportions. A main Porch in the east, a large shrine at four sides.  A mosque in the west of the shrine and several rooms and sepulchers which connected to the monument. The design of the mausoleum has mirror works, ornaments and silver doors, and porches. Also plaster writings, and spacious sanctuary. In alcoves between the areas under the dome of the shrine, the sanctuary located. This construction method of the mausoleum and shrine in the middle of the mausoleum is the same as the other shrines in Shiraz.

Also ,the tomb, with its latticed railing, is in an alcove between the space beneath the dome and the mosque. And this custom of placing the tomb in this position, so that it is not directly under the dome, is to be seen in other famous places of pilgrimage in the city of Shiraz, and may be considered a special feature of Shiraz shrines. Two short minarets, situated at each end of the columned portico, add impressiveness to the Mausoleum, and to the spacious courtyard, which surrounds it on three sides.

Also, the other sights are Shah-e-Cheragh mausoleum and its large courtyard surrounded by three sides. Over the past two decades, many repairs are done at Shah-e-Cheragh tomb, and in the south and north sides of the mausoleum, several chambers made. Besides, a lot of scientific and literary celebrities buried, in the vicinity of  Shah-e-Cheragh .

In addition, the Shah-e-Cheragh Mausoleum registered on 10th February 1940, under No.363 in the list of the national monuments of Iran. Also rates by many travelers as the most beautiful mosque in the world. The shrine was popularized in the West when in October 1976 Interview magazine published a Firooz Zahedi photo shoot of Elizabeth Taylor as a cover story.

Shah-e-Cheragh is one of the tourist destinations, and all like it because of its spiritual atmosphere and because of mirrors work inside the mausoleum. According to a survey that we made between the tourists, most of them affected by the sense of peace and also the influential matters by this place. Moreover, they really love the place and remember Shiraz  as one of the most spiritual city of Iran.