What Are Top 10 Essential Persian Foods?

You may ask yourself: what kind of food do they eat in Iran? You may also have heard from those traveled to Iran that there are a great variety of Persian food. And when you travel to Iran, you will not know what to choose for a meal in Iran exactly. But why is the scope of native Persian foods so wide? If you take a look at Iran’s map and also the history of Iran, you will find the answer. As the center of Ancient Persian Empire, Iran neighbors different countries such as the former Soveit Union countries, Afqanistan, Turkey and the Arab states. So it has different dishes consisting of ingredients from around the world added to its own native ones.

Many coveted ingredients are actually native to Iran, such as saffron, pistachios, mint, almond, oranges, walnuts, pomegranates and grapes. Since Iran has a climate with four distinct seasons, you will find different types of foods which just grow in special regions in Iran. Here, in this article, you will read about 10 essential Iranian cuisine you have to try during your trip to Iran. Iranians are so hospitable, so whether you try these Iranian foods in restaurants or in a house, you will for sure hear the phrase Noosh-e Jan! (the Persian word for Bon Appetit).

This is an essential part of Persian gatherings and it consists of tart pomegranate with chicken or beef, ground walnuts and onion. Sometimes saffron and cinnamon are also added. Some Iranians like to add a bit of sugar to balance the acid. Fesenjun has a long and rich history. Archeologists found some inscribed tablets in the ruins of Persepolis, dating back to 515 BC, listing pantry staples of the early Iranians. They included walnuts, chicken and pomegranate, which are the key ingredients in Fesenjun. 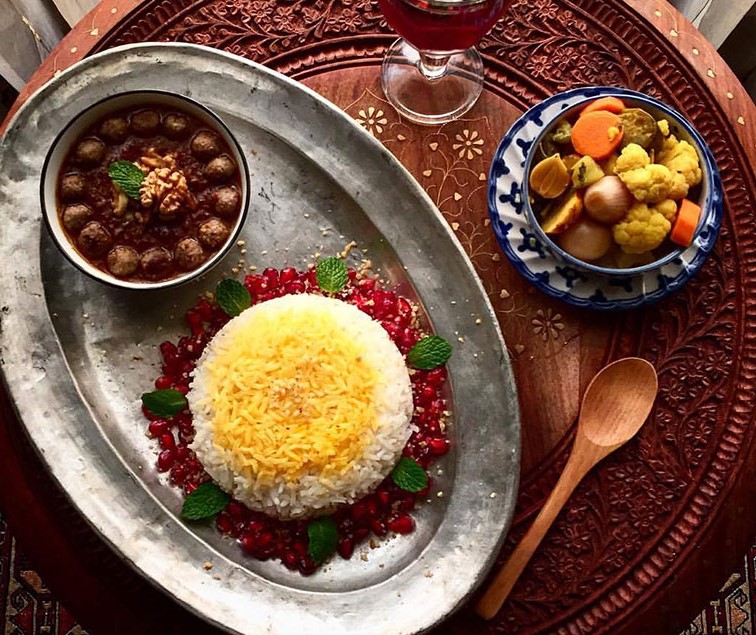 This stew cook with red-gold colored tomato and turmeric, with sheen of oil on the top. One of the top characteristics of Persian food is this sheen of oil which shows that a stew has been cooked long enough.

The eggplant is first fried separately and when it gets golden-brown, it is cooked with onions, lamb, tomatoes, lemon juice and seasoning. Like all other Persian stews, the eggplant stew is eaten over rice with a fork. 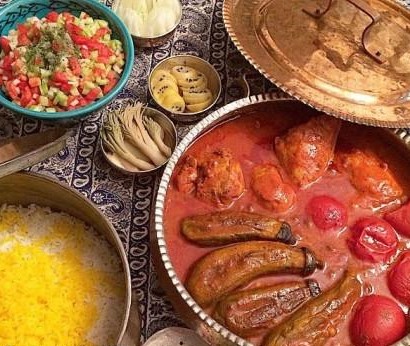 In Persian cuisine, if rice is prepared with butter and saffron, it is called Chelo, But Polo  can  cook with other ingredients as well. The ingredients may be herbs, vegetables, beans, meat, died fruit, nut and even noodles. In spring, when Fava beans and dill are young, their combination with rice is so popular among Iranians. This dish includes green dill and faves and usually with small chunks of lamb. And the rice has to be slightly flavored with saffron. 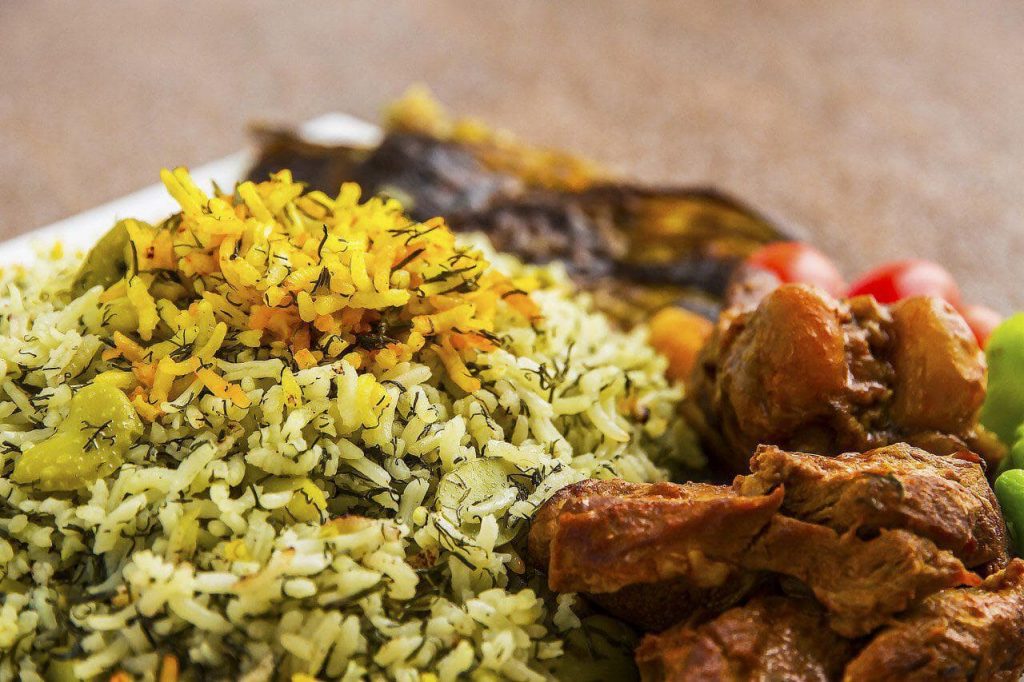 This classic Iranian rice dish is studded with red berries, which are first dried and then rehydrated prior to cooking. Actually Iranians love sour flavors. To prepare this dish, the rice is cooked with butter to soften the intensity of the berries. Zereshk Plow is actually is a wedding dish in Iran. 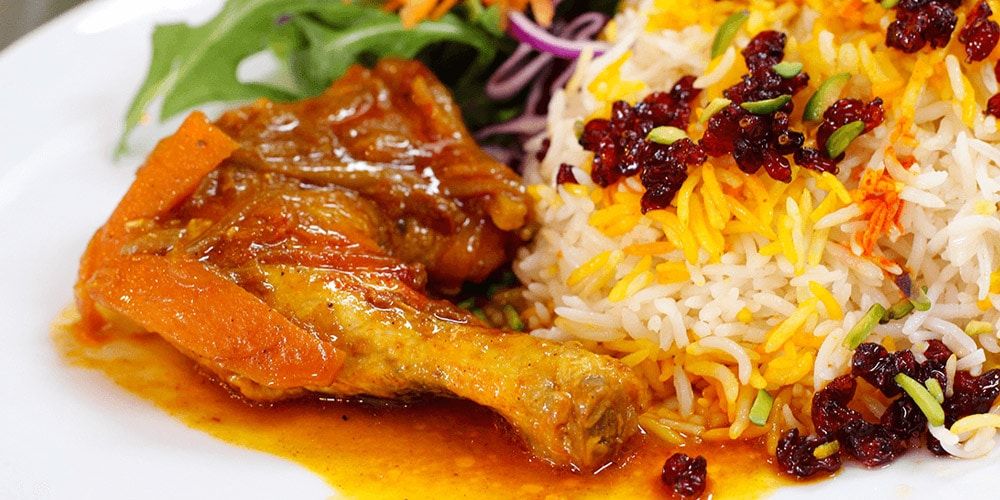 Ghormeh Sabzi is one of the most famous foods among Iranians. Almost all Iranians love this. Ghormeh Sabzi makes with herbs, kidney beans and lamb. This traditional Persian food satisfies two flavor obsessions: It is a bit sour and full of herbs. Dried lime or Limoo Amani,  use as seasoning in Ghormeh Sabzi. These limes add extra taste of bittersweet and sour. Another unfamiliar taste for westerners is the taste of fenugreek leaves used in this Persian dish. There are other herbs as well, like Parsley, coriander and scallions. All of these together make the unique flavor of Ghormeh Sabzi and that’s why it is so popular.

Above all, we have to confess that This food is one of the favorite foods for Iranian men. 🙂 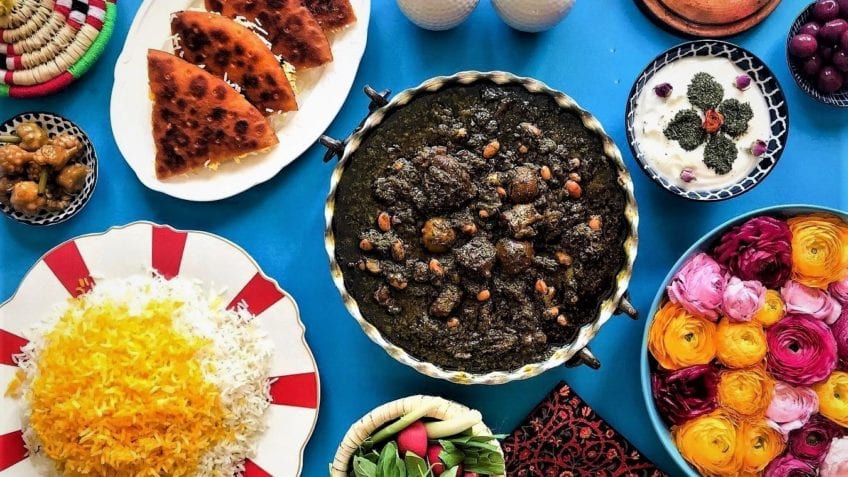 There are different kinds of Aashes in Iran, such as Ash-e Reshte, Ash-e Dough, Ash-e Sabzi, Ash-e Kashk, etc. but the most common one is Ash-e Reshte. It is a textured soup full of noodles, beans and leafy greens such as beet leaves and spinach. At the top of the dish, you can see a layer of mint oil, crunchy fried onions and also sour Kashk. Kashk is a diary product which tastes like sour heavy yogurt. Traditionally, when someone decides to go on a travel, Iranians cook Ash-e Reshte in their goodbye party. Ash-e Reshte is also part of Persian menu for Nowruz, the Persian New Year. It also serve before the main foods and also can use as a main dish for dinner. 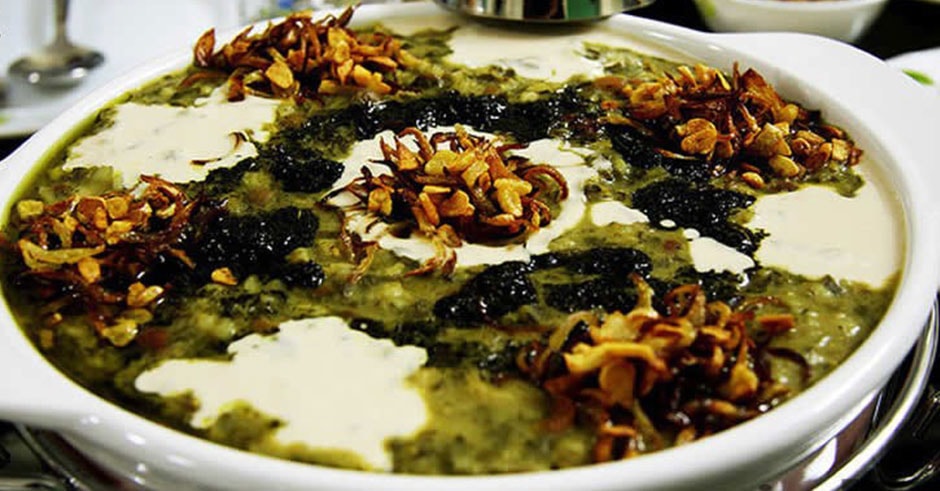 What is the national dish of Iran? Yes, this is Chelo Kebab. Kebabs are more diverse than most of foreigners know. First, you can see Kebab Koobideh in all restaurant menus. This is ground meat seasoned with minced onion, pepper and salt. You may think it is simple, but the taste is so good. Then you may try Kebab Barg which is thinly slices lamb or beef with lemon juice and onion. It is also basted with saffron and butter. Third, you will find Chicken Kebab, or Joojeh in Persian. This is also another traditional Persian food made of chicken with its bones, marinated in lemon and onion and again basted with butter and saffron. Nowadays you may find Jigar everywhere in Iran. Jigar is Lamb river kebab, garnished with fresh basil leaves and lemon. 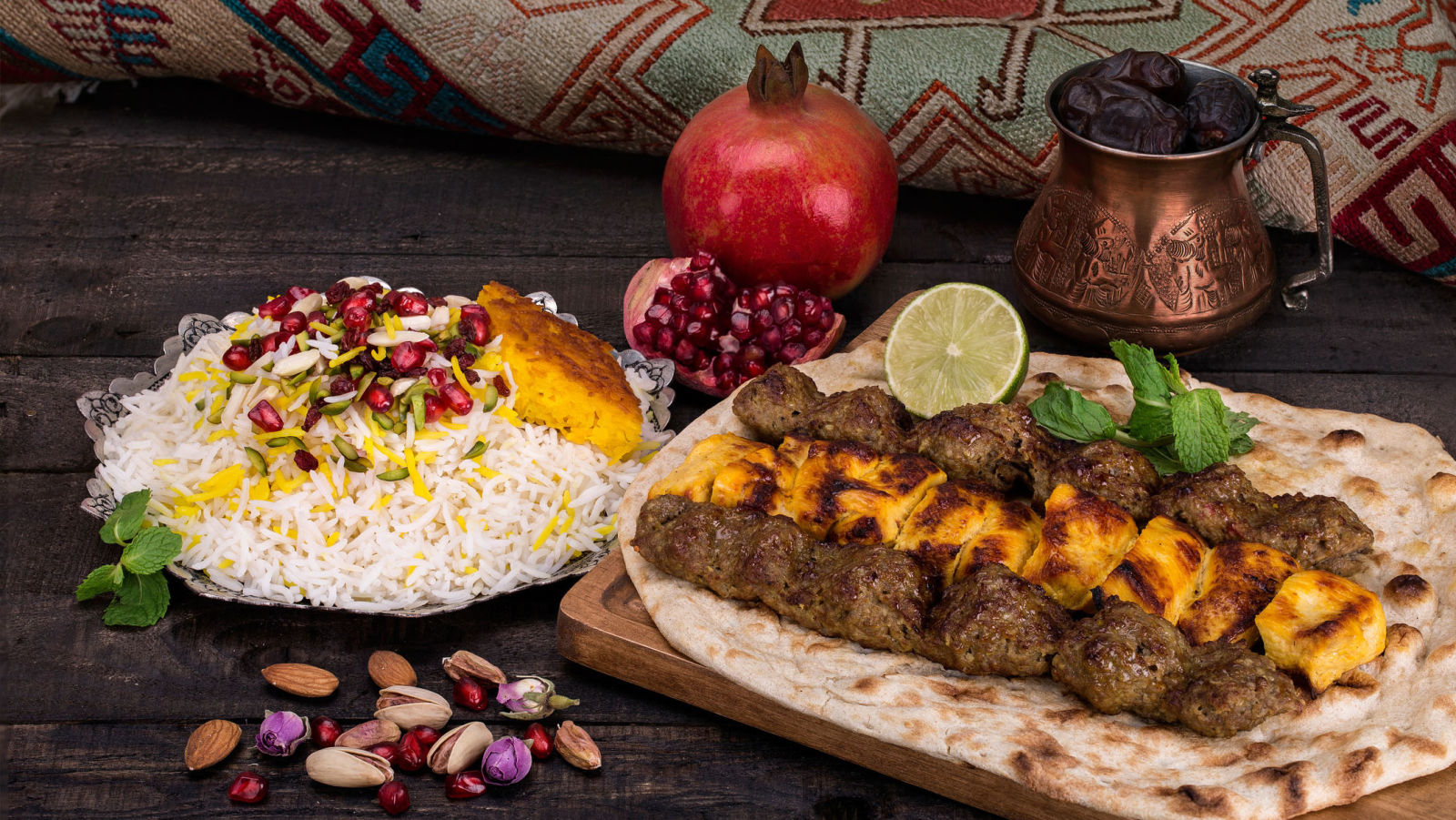 Dizi dates back to hundreds of years ago. Because of traditionally cooked and served this food in small stone dishes Iranians name this food as Dizi. Actually it is the name of the container. Traditional restaurants in Iran still use these stone dishes for cooking and serving the food.

Iranians also call Abgoosht for Dizi too ; it literally means “meat broth”. This high-calorie food is a good source of protein, and it is also much more common and preferred in winter. It would be originally made with lamb and chickpeas only before Iranians got familiar with tomatoes and potatoes and used them in Iranian cuisine. The major ingredients of Dizi are meat and beans, but in some areas locals add other things to the recipe based on their tastes and interests. For example, caraway  add for seasoning in north of Iran, garlic, and in Kerman province. 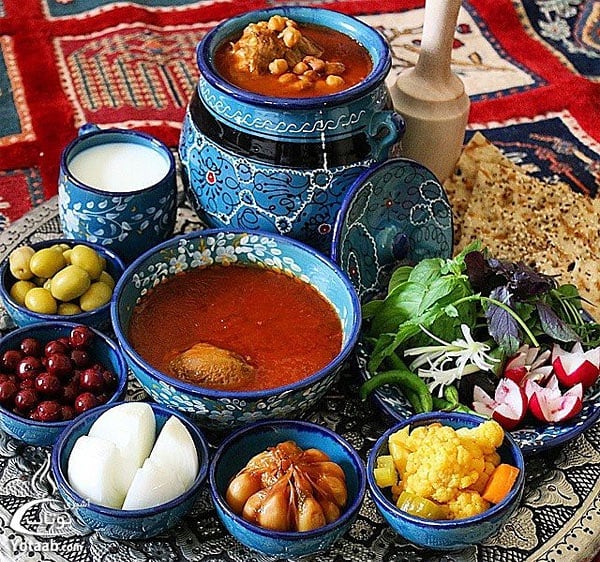 Dolmeh Barg-e Mo is one of the traditional Persian foods and originally Azari people in West Azerbaijan cook it. It cook in almost every area of Iran, but with some slight differences particular in each area. It has a special value among favorite summer dishes for Iranians. Dolmeh is actually vine leaves stuffed with a combination of meat and rice, but in fact it can be stuffed by any fruit or vegetable. Popular varieties include stuffed cabbage leaves, spinach, eggplant, tomato, pepper or apple. 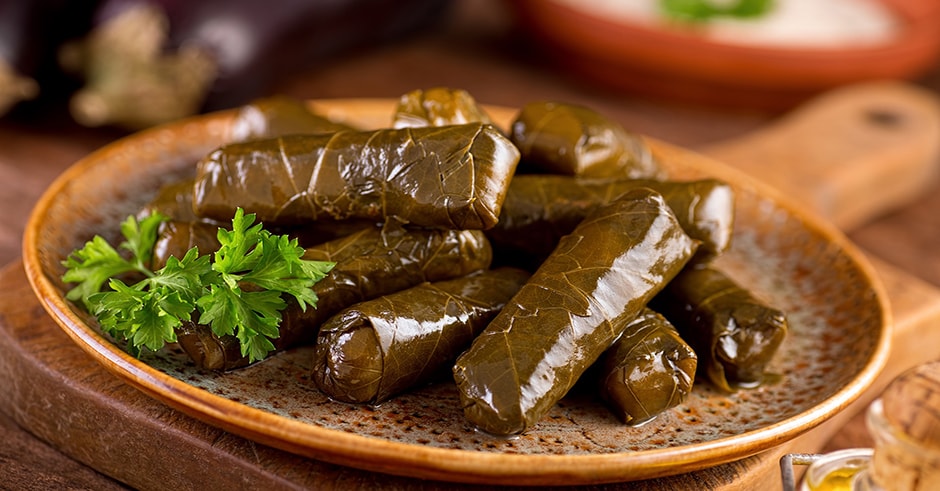 Tah Dig is not actually a dish itself. It is the crisp golden layer of fried rice or sometimes potato at the bottom of the rice pot. You may never forget the joy. It somehow tastes like a mixture of potato chips and popcorn, but with the basmati rice flavor. If you are in a restaurant, you won’t see Tah Dig in their menu; you have to ask them for it. And remember, in Iranian gatherings, it is ok if you pick Tah Dig and eat it with your hands. 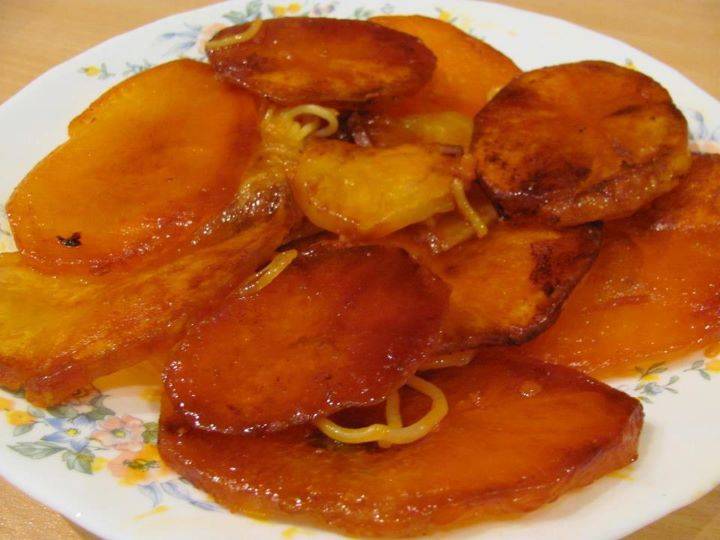