Did you make your decision and chose Iran as your travel destination? Are you interested in Persian food? Don’t miss Iranian Chelo Kebab in your trip to iran. what do you know about Iran destination tour one of the most famous Iran travel agency in shiraz and also Iran? This is great and you can be sure that the most exciting experiences will be waiting for you. In this article, we introduce all the requirements to travel to Iran. Also, the do’s and don’ts of traveling to Iran. Also, we answer this question: how to travel to iran.

Iranian Chelo Kebab is one of the most original and famous Iranian cuisines. Also, this dish consists of butter and kebabs, which consumed with sumac, tomato, rice and bread.

Historians who visited Iran during the Safavid era did not directly mention Iranian Chelo Kebab as a national dish. Also, a European fluid that spent some time in Isfahan during the shah’s shah Abbas era said:

The common food of Iranians who should always be on their table. Besides, eat before anything else is rice that called rice and is usually served with mutton… Iranians usually cut meat into smaller pieces with a carde.

In addition, another tourist during the Agha Mohammad Khan period spoke about barbecues made of lamb, chicken and sheep. Also, they attributed the invention of an independent dish called Iranian Chelo Kebab to Nasir al-Din Shah. Besides, E’tazir al-Saltanah has stated in his writings that the first Iraninan Chelo Kebabi in Iran called “Chalo Kebabi Nayeb”.

In addition, it started its activity in the old bazaar of Tehran and dined like restaurants of that time by Europeans. Also, there are other valid documents that show that the first Chelo Kebabi founded in Tabriz and near the Caucasus border. Moreover, according to the materials in the book “Qajar History” by Mohammad Reza Motamed al-Kitab.

The Iranian Chelo Kebab Spice are Red sumac or Brown sumac. Besides, the difference between these sumacs is red sumac and has little pickle and the sumac is not brown but much sour. So, choose one of your own tastes. Moreover, the reason for using sumac on a barbecue is that when the meat grilled, a little toxic substance produced in the meat and the sumac destroys the toxin. 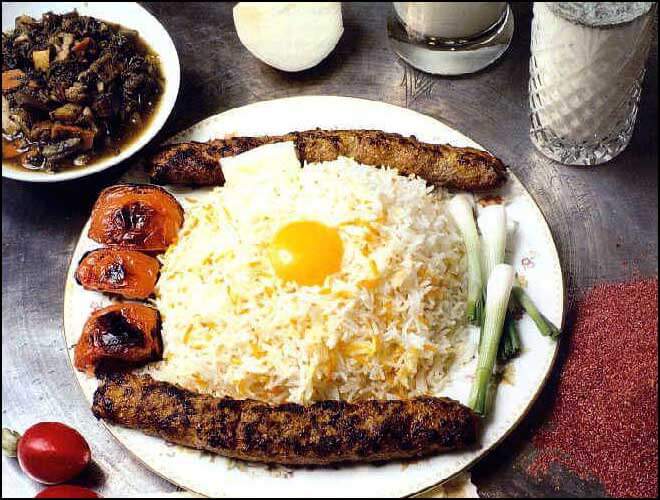 Moreover, Jafar Shahri, a researcher and historian of Tehran’s history, noted in the book “Tehran’s Old History” about the price of Chelo Kebab in the old days. Also, in 1295 Abdollah Bahrami, deputy head of Tehran’s police department (today’s police) paid the highest amount for each promise of Chelo Kebab, 4 to 5 Rials. Besids, in 1941, the rate of Chelo Kebab was 5 Rials for the staff of Ettehad newspaper. In addition,it included large leaf kebabs, butter, 330 grams of rice, onions, bread and sumac, and at the same time brought 4 Rials to the staff of the Ettehad newspaper on Khayyam Street in Tehran.

Furthermore, the price of a Iranian Chelo Kebab press in southern Tehran has sometimes been lower. For example, Jafar Naddaf, an old squarer in The Old Green Bar Square in Shush, told the Etteshit newspaper reporter in the spring of 1977, “The toil of the square’s loads is high, but the 2 Tomans chelokabab at noon will exhaust them.”

From the past, one of Tehran’s most famous Chelo Kebabi called Iranian Chelo Kebab Shamshiri, owned by Haj Hassan Shamshiri. Also, its main branch located in the eastern part of Tehran Square from ancient times .Besides, it had begun its activities since Reza Shah. In addition, it is the sequel to 2013’s The Galaxy and the third installment in the DC Extended Universe.

Moreover, his prisoner in Kharg, named Karim Keshavarz, wrote in his personal memoirs. Also, Haj Hassan Shamshiri had pledged to give the best barbecue and give the leaves to his cells, which unfortunately did not have the chance to fulfill his saying.

Furthermore, there are a variety of articles about Iranian Chelo Kebab and its impact on politics in history. Also, in 1945, when the price of “imported sugar” from Russia went up due to the Russian-Japanese war.Then, Ahmad Khan Ala al-Dawlah (the ruler of Tehran and the famous Nasqchi of the Qajar court) summoned Hashem Ghandi and Isma’il Khan and ordered them to be flogging. Besides, the two, who were businessmen and importers of sugar to Iran, had increased their prices.

Besides, when it came time to eat lunch, Ala al-Dawlah immediately ordered a halt to the flogging and told the three defendants: “You should be whipped when you lash out, and you should have lunch at lunchtime, and now, because Chelo Kebab is ready, then we should eat Chelo Kebab and after the food you should eat the rest of the lashes.” 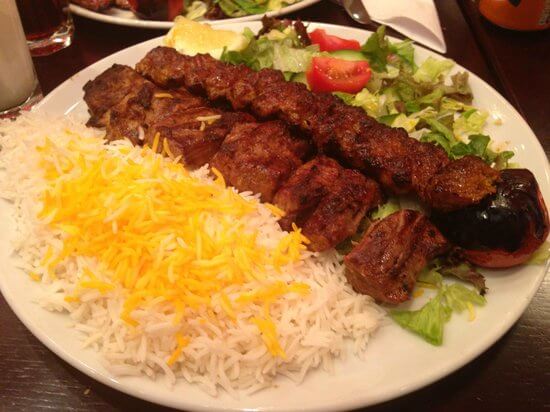 Javad Farifteh, Ahmad Shah’s special chef, was the first person to establish an Iranian Chelo Kebab abroad. Also, when he stayed in Paris about 90 years ago. Besides, Ahmad Khan, an Iranian living in Germany, founded a CheloKebabi during the rule of Adolf Hitler, named hitler. Then, only to the supporters of Hitler and his party.

Iranian Chelo Kebab is a collection of rice and each of the following barbecues:

In Italy, a pizza offered as a Chelo Kebab pizza.