In the way from Shiraz to Isfahan you can visit the remnant of Pasargadae the great capital of Cyrus-founder of the greatest ancient east empire. Tomb of Cyrus the Great is also located in this place. While nothing has remained from glorious cities of ancient world like Babylon, ruins of Pasargadae still shows the glory of the Acheamenids art and culture.

Pasargadae as a national heritage site includes many Acheamenid relics such as Acheamenid palaces,a fort,tomb of Cambyses and Mozaffari caravanserai from Islamic period. One of the remained structures of Pasargadae is the tomb of Cyrus the great which always were a sacred place through history. The first Archeological studies about the tomb dates back to 207 years ago when James Morier had some researches in1808 and seventy years later its photos were published. But even this fact couldn’t change much in the common believes of locals towards this place. This place was always considered sacred so that even in Qajar period about only 150 years ago religious ceremonies has been held and people buried their deceased. 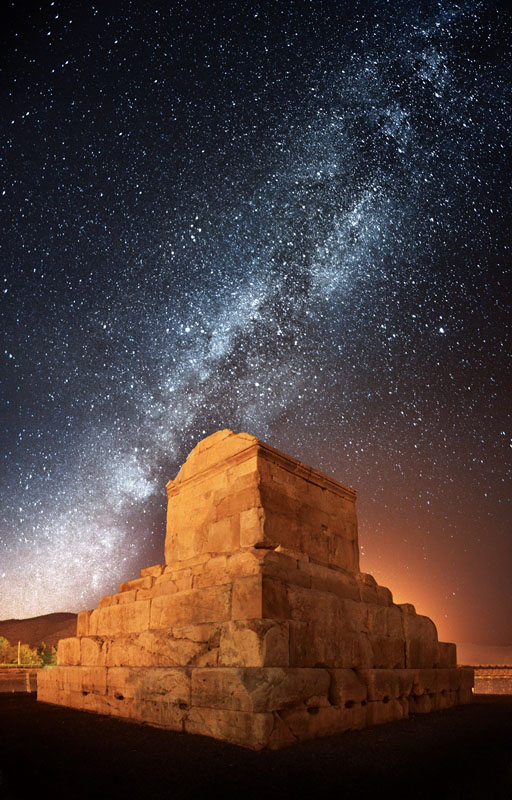 The oldest saying about this tomb which is seen in historians logbook dates back to the time when  Alexander the great attacked to Iran indicating that this place had guard to look over it and victimize horses for peace of Cyrus soul.

A common local thought about Pasargadae relates it to the prophet Solomon. It was believed that his mother is buried here so people called it mosque, martyry or tomb of Solomon. According to this belief In the seventh century Atabakan the governors of Fars province named themselves Solomon heirs and built a mosque. It was actually an important mosque and people used to travel here for Qurban prayers although it lasted about 5 to 7 days .This was the reason of building a caravansary near Cyrus tomb.

In the 9th century Ibn Balkhi an Islamic historian says that the punishment of looking into the tomb is going blind and people believed any one should not get into the tomb.

Pietro della Valle who traveled to Iran during Safavid period mentioned that people believe on Fridays strange looking flow of blood comes out of an ancient cypress near the tomb of Solomon’s mother. In Safavid period and even until Qajar dynasty only women had the permission to visit this tomb. Jane Dieulafoy who visited here in that time says that she was forbidden to enter the area because of wearing manly custom. In Qajar period preserving and protection of this place was womens’ duties.

Later many religious ceremonies and weddings were held here and until the end of Pahlavi era it was used as cemetery.

You can visit Tomb of Cyrus the Great through our Iran Tour Packages. Iran Destination, Iran Tour Operator, tries its best to show the real Iran to all travel lovers. Just take a look at our Iran Tour Packages and then you can contact us for any request, question, suggestion, etc. our Iran Travel Agency is ready to answer you at any time.