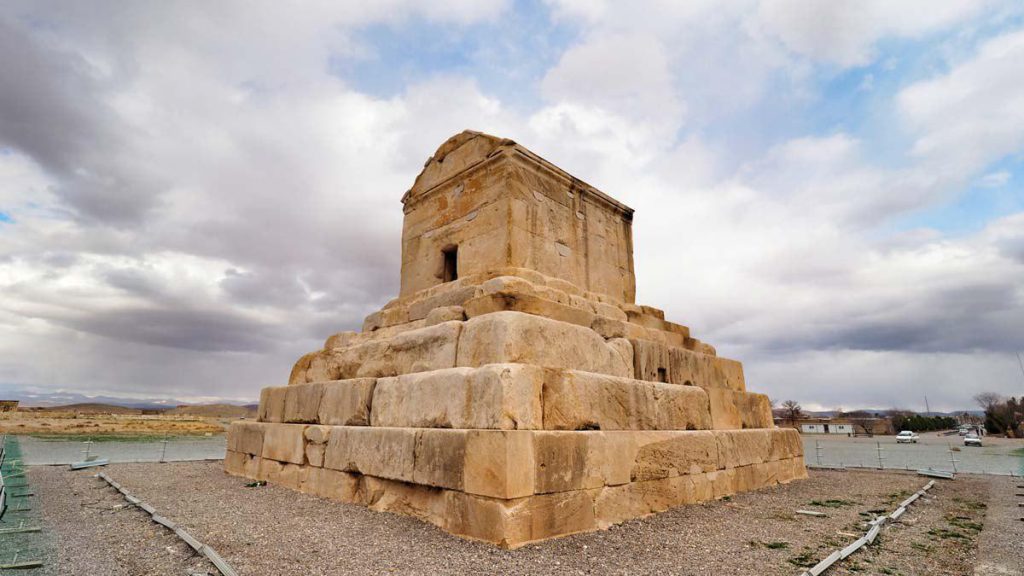 Pasargadae, The Tomb of Cyrus The Great is one of the tourist attractions in Fars province and Shiraz city. It is popular among tourists on different days of the year, especially during the days of Nowruz.

It is an ancient plain whose history dates back to the Paleolithic era. In this place, numerous magnificent mansions and monuments built. And it referred to as the royal collection of pasargard. It is a relic of the glorious Achaemenid era. Also, Pasargadae, the name of the first capital of the country is today the Dashti is vast. And in the center of Fars Province, located in but on the side of all the palaces and buildings of historical attended.

“the Tomb of Cyrus”, the building is worthwhile is like setting among the other heritage remaining from the time of the Achaemenid, etc. glowed. The monument of the great Cyrus tomb located in the southern part of the Royal Complex of Pasargadae. And built in such a way that it been visible from any direction in the Pasargadae plain. A very simple and yet beautiful building that builders have built with an elevation of 11 meters and an area of nearly 160 square meters.

In fact, building, Tomb consisting of sakooha is the cornerstone of the original. And, according to the opinions of several experts as yourself. the style of architecture, this monument invaluable is derived from the Greek architecture of Asia Minor, etc. The Egyptian, etc. Elamite and is a noble.

In fact, the overall structure of the Cyrus tomb considered consisting of two parts. Pasargadae, The base of the tomb, which is the first part of the building, is a platform made of 6 stairs and the second part of the tomb is a small room with a steep ceiling on it and the builders have embedded it above the first part.

It is interesting to know that all parts of the exterior of the Tomb, seven floors, and each other, is made and probably the designer of the marble. This type of design because of the holiness of the number seven, etc. Considered and implemented. The Tomb’s cornerstone is also white and yellowish limestone, which is likely to be extracted from the sivand mine, located 30 kilometers from Pasargadae.

Chamber tomb has a height of over two meters, has vacuumed to the thickness of the 1.5 Meters، gems carved in four rows that beautifully and very carefully on each other is considered, two piece of stone is very heavy on the floor of the tomb and cover its roof also Stone, etc. is.

Pasargadae, The remarkable thing about the architecture of the Cyrus tomb is the lack of any mortar in the construction of the building. This property exists in the architecture of Persepolis. The mansion that continues to date and with the passage of more than two thousand years is standing resistant. Of course, experts believe that the use of the Unpacked metal tail that probably free them from the iron. And lead is connecting the stones to each other of the main reasons for the strength of the striking monument. Also, it is the Tomb of Cyrus.

The ancient city of Pasargadae, registered in the UNESCO World Heritage list, is located 130 kilometers from the northern part of Shiraz in Fars province. According to historical texts, it seems that the ancient city in the morghab plain, a region that was about 2500 years ago a vast and lush garden, built. The importance of this place has been such that according to the traditions, Achaemenid Kings held their coronation ceremony in this place.

As stated earlier, the Tomb of Cyrus is located in the ancient area of Pasargadae.  Pasargadae city, Fars province and on the southern side of the valuable complex of Pasargadae. To go to this historical place and see the effect of invaluable, the possibility of the use of personal car on the track, road and also the use of rail transport for gamers there; but whatindisputable required to attend this place to the city of Shiraz, he said. Marvdasht County can also be another option for going to Pasargadae.

Above all, If tourists intend to travel by private car to this area. They will be required to travel a distance of about 130 kilometers. He is best first to travel to marvdasht and after crossing the city, the path of Pasargadae to reach the merghab plain and the gorge rhetorical. When present in the plain of Murghab, should it have gone up. And while watching the beautiful scenery about this ancient area of the country. Well can the tombs, The Magnificent, is one of the most famous kings of Persia view them.

If tourists plan to travel by private car to this area. They will be required to travel a distance of about 130 km. He travels to marvdasht for the first time. And after crossing the city, the path to Pasargadae reaches the merghab plain and the gorge rhetoric. When present in the chicken plain it must climbed and while watching the beautiful and eye-catching scenery about this ancient region of the country. Well can tombs, Majestic, is one of the most famous kings of Iran they see.

There is also the third option to get to the Cyrus tomb in front of tourists. And it is the use of rail transport. In this case, to go to Pasargadae, it is necessary to take the train to Isfahan-Shiraz five kilometers from saadatshahr. Then take yourself to Pasargadae with the help of taxis located at the station.

Posted By: Site Manager
No Comments Cyrus the Great, cyrus the great tomb, cyrus the Persian
Previous Post
Next Post