Tabriz Bazaar is one of the largest indoor markets in the world. Also, one of the most vibrant historical markets in Iran listed in the UNESCO World Heritage List. Besides, this market, which includes a set of different social structures, is unique among Iranian markets.

In addition, continuous brick structures, arches and high domes of the bazaar, a plurality of Timches, the establishment of a number of schools and mosques. Besides, the design style of chambers, all indicates the existence of a great example of a commercial environment alongside Islamic life. Also, Tabriz bazaar with more than 5,000 shops has a large number of mosques, schools and houses.

Tabriz bazaar with numerous alleyways and winding alleys that tow the history and memory with years, with old brick walls, brown wooden doors, kind people, traditional texture and long dating, attracts many tourists throughout the year to the city of Tabriz. So, if you pass this market, while walking and enjoying its attractive architecture, you can find top-notch and excellent goods. Furthermore, such as leather products, textiles, handmade carpets, nuts, handicrafts, etc. Make good prices.

Tabriz indoor bazaar with an area of over one square kilometer is the widest interconnected brick complex in the world. Besides, it’s consisting of 5,500 chambers, 20 orders, 25 teams and 35 houses, schools, baths, mosques and caravanserai, and in terms of the placement of all these sections together, among the markets of Iran shines like negini. Also, this bazaar considered one of the landmarks of Tabriz, was listed in 1975 as a national monument of Iran. Moreover, in 2010 registered as part of the Silk Road King and the world’s largest roofed structure in the UNESCO World Heritage List.

In general, Tabriz market functions include collection, distribution and retail. Besides, various sold in this market, the most important of which are handmade carpets, leather bags and shoes, herbal and pharmaceutical products, spice, textiles, etc. Moreover, it is mostly in the mood of traditional markets, where there is no news of today’s advanced devices such as mobile phones and computers.

In addition, considering that there are Jame mosques and schools such as Sadeghiyeh School in this market, on occasions such as Nowruz or mourning Ramadan and Muharram, the economic functions of the Tabriz bazaar marginalized. Furthermore, Tabriz bazaar covered in black with the coming of Muharram month, and most bazaars close their shops from the 8th to the 12th of Muharram. Also, as the main center of mourning, Timche Mozafarieh welcomes the largest number of mourning processions. In addition to mourning, the people of bazaar distributed vows such as tea, dates, cookies, etc.  Moreover, among the mourners pay Hosseini and the mourning ceremony in Tabriz Bazaar listed in the national rituals list.

Where is Tabriz Bazaar?

Tabriz Bazaar overlooks the Grand Mosque in the west and leads from the east to Ali Qapu and from the north to parts of the Chai Square River. Also, a large part of the bazaar area located in the south of Chai Square and in the distance between the streets of Martyrs, Daryi, Chai Kenari, Ferdowsi, Shahid Motahari and the Islamic Republic.

Tabriz bazaar chambers often operate from 10 a.m. to 17 p.m., although on holidays, teams and houses are closed and only the exterior walls are open.

Date of construction of Tabriz Bazaar

The history of Tabriz Bazaar is not clear.However, many tourists from Ibn Batuta and Marco Polo to Yaghut Hamoui, Gaspar Daruville, Jean Charden, Jamali Cardi, Hamdollah Mostofi who visited it from the 4th/10th century to the Qajar era, have provided information about it in addition to praising tabriz bazaar.

In addition, since the city of Tabriz was located on the Silk Road route and consequently many caravans from different parts of the world passed through it, Tabriz Bazaar enjoyed a very good prosperity. Besides, it considered one of the most important trading centers of that time and it was so important that the gates of this market considered as the main gates of the city.

Moreover, there are paintings from the Seljuk era, according to which a market located in the current location of Tabriz Bazaar.Besides, it is in the Ilkhanid era and with the choice of Tabriz as the capital, this market gained a great reputation and this prosperity continued until the Safavid era. So, that they came from different cities to trade this market. Furthermore, Tabriz Bazaar has undergone various accidents during its long history such as destructive earthquakes (1193 AH earthquake) and has refurbished and refurbished each time. Actually, the current bazaar of Tabriz dates back to the late Zandieh and the Qajar era. 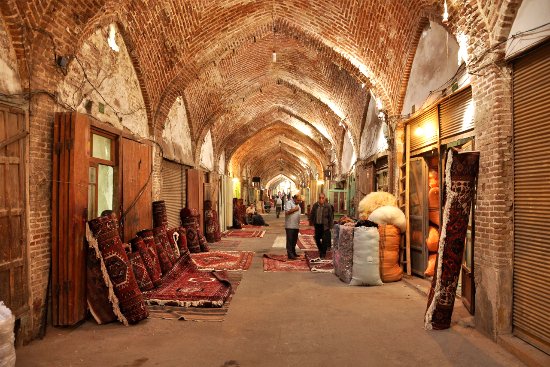 The city of Tabriz built in such a way that its exterior is in harmony with the urban texture and resembles ordinary buildings. In addition, the importance of Tabriz bazaar did not just relate to its extent and in terms of architects’ dominance in the use of bricks. Moreover, brick pottery is important, which has created a variety of spaces. Furthermore, one of the interesting features of this market is the valves in the center of its arches that allow the exit of hot air.

In addition, these timches, despite their similarities in terms of number of sides and framing, have different construction patterns. Besides, for example, Timches with longitudinal forms, scattering of skylights in them cause rhythmic formation of light and darkness. Furthermore, the timches have a domed and bricked roof, and their entrance doors opened for days and closed as night falls as well as holidays.

The main items connected to each other through minor codes that the Timches and houses erected between them. Besides, at the intersection of the tracks, there are tee and crossroads decorated with brick dome arches. Also, the market a publicly roofed and entrance-free passageway, the most important of which are the old bazaar, Kafashan Bazaar, Safi Bazaar, Friday Mosque Market, Yemeni Doz Bazaar, Abolhassan Bazaar, Dell Women’s Bazaar, large and small, etc.

There are several caravanserais in Tabriz bazaar, from the great Amir caravanserai to the Haj Abolhasan caravanserai and the caravanserai of Haj Mirza Muhammad, which were thriving in their day. Besides, these structures include an area for unloading goods and lively loads, rooms, chambers and warehouses.  Furthermore, the caravanserai yard was a market respiration, bringing oxygen and fresh air into the market through the valves above the market dome.

There are important and famous houses such as Georgian Lor House, Mirza Mahdi House, Khan House, Haj MohammadGholi House, Amir House, Saray Omid and Keche Chiler House in Tabriz Bazaar, which include small units with open-air courtyards and in the past goods unloaded in its enclosure.

In addition to 12 madrassas of religious sciences, Tabriz Bazaar has about 30 historical mosques such as the Grand Mosque, Hojjatoleslam Mosque, Mofid Aqa Mosque and The Tomb Mosque, which decorated with stone columns, multiplication domes and work moqrins.

Hammam Khan, Hamam Ghazi, Mirza Mahdi Bath and Hammam Nobar are among the warmth of Tabriz Bazaar which are important in terms of architecture and historical history.