Narenjestan garden, In this article we provide every things that you should know about travel to Iran. You can feel Iran tourism and Iran tour in this beautiful garden. Let’s explore Iran tours and Iran hotels with Irandestination.

Narenjestan garden is a traditional and historical house in Shiraz, Iran. It is located near in Qajar Complex, as Nasiral Molk Mosque, Zinatol molk house and walking distance from the Khan Madrassa.

The Ghavam complex built between 1257 and 1267 A.D. during the reign of Nasser al-Din Shah Qajar, by order of Ali Mohammad Khan Ghavam, and consists of two outer parts (the Naranjestan Museum) and the inner part (the house of Zinat al-Muluk), which connect by a tunnel. The building used as the seat of government or for conducting political and military affairs and meeting with representatives of foreign governments. The Narenjestan building  donat to Shiraz University in 1345. And between 1348 and 1358 it  in the possession of the Asian Institute, under the supervision of Professor Arthur Opham Pope, a famous Iranologist.

These two buildings have been decorated by Shirazi architects and artists using arts such as mirror work, inlay work, engraving, brickwork, mosaic work, carving, plastering, moccasins, etc. Entering from under the south building and the shop of traditional and decorative accessories. We face with a very beautiful and symmetrical area of orange and palm trees, which leads to the main building, which is very colorful, light and mirrored.

Passing through this area, we reach the main building and its magnificent porch. It is located on the left side of the coffee shop. To enter the building and its porch, several stairs have been installed on both sides of the porch, which are very beautifully and artistically designed. There are small rooms around and behind the porch, which will immerse you in a sea of mosaic art and mirror work. In these rooms, historical furniture and furniture related to the same period are spectacular. The ceiling of the adjoining rooms is mostly made of wood with beautiful patterns and drawings on it, but entering the main room next to the porch, the colors reflected from the mirror work on the ceiling will dazzle your eyes.

The whole main room and porch are covered with the unique mirror work of that period, and it takes days, even weeks, to pay attention to all the details of this work. The main hall, known as the Hall of Mirrors or the Royal Hall. It connect to the central porch through a crescent-shaped wooden window with sash doors. The walls of this hall mirror all over.

On the upper part of an integrated marble fireplace, two symmetrical images of Ghavam al-Muluk III are carved. The central porch with two large stone pillars that used for various ceremonies, has a high and integrated ceiling that decorat with beautiful mirrors and paintings. The presence of large mirrors on the walls of the hall. And porch reflects the spectacular views of the garden, pond and fountain.

In front of the porch, a beautiful pool with its monoliths takes us to the glory of the peak period of this work. In the basement of this building is the Museum of Antiquities of Narenjestan, which consists of a beautiful and valuable collection of dishes, coins, paintings, tiles, etc. from different historical periods of Iran.

This house built between 1879 and 1886 by Mirza Ibrahim Khan. The Qavam families were merchants originally from Qazvin, but they took the important rule in the government during the Zand dynasty which followed by the Qajar dynasty and Pahlavi dynasty as well.

During 19th century, the Qavam “Naranjestan” keeps the elegance enjoyed by the upper-class families. The paintings on the low ceilings of Narenjestan house are inspired by Victorian era Europe.

Focal point of the house is the mirrored porch, overlooking a small garden which design with date palms, fountains and flowering plants.

The House became the headquarters of Pahlavi University’s Asia Institute during the second Pahlavi era. It directed by Arthur Upham Pope and Richard Nelson Frye. They also lived in the house for a while. The house is a museum todays and is open to the public.

Toward south along the main axis of the building and into an octagonal corridor. There is a main entrance of the garden opens. It  decorat with bricks. There is a tablet of marble stone on top of the entrance on which you can see Quranic verses and the poems of Asudeh Shirazi about founder of the garden and date of its construction. You can see two Qajar soldiers holding their rifles, on both sides of the lower part of the entrance. The entrance door made of wood and inlaid. The corridor decorat with the bricks and shape of stars.

The building is two meters above the yard and made of bricks. The color of tiles includes the warm colors and varied patterns.

You Can Visit this Place through the following Iran tour packages offered by Iran Destination, Iran Tour Operator: 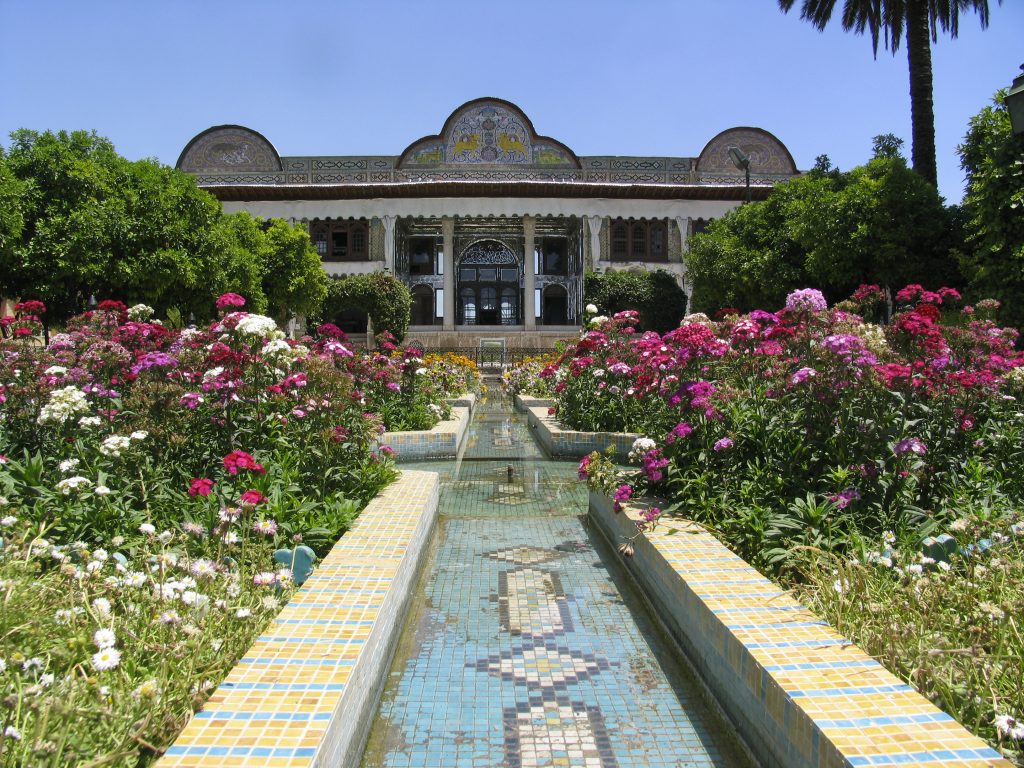 In case you have any questions, requests, or suggestions, please feel free to contact our Iran travel agent. we are available to answer you.
Posted By: Site Manager
No Comments iran tours, Iran ttours, Narenjestan Garden, Narenjestan Qavam, Shiraz hotel
Previous Post
Next Post