Mahan is a city and capital of Mahan district in Kerman province. It is well-known for the tomb of the great Sufi leader Shah Nemat Allah e Valli as well as Prince garden ( Shazdeh Garden). The tomb of Shah Nur-eddin Nemat Allah Vali poet, sage , Sufi and founder of an order of dervishes has twin minarets covered with turquoise tiles from the bottom up to the cupola.

The mausoleum was built by Ahmad Shah Kani the rest of the building was constructed during the reigns of Shah Abbas the first, Mohammad Shah Qajar and Naser al-ddin Shah. Shah Nemat Allah e Vali spent many years wandering through central Asia perfecting his spiritual gifts before finally settling at Mahan twenty miles south east of Kerman where he passed the last twenty five years of his life. He died in 1431 having founded a Darvish order which continues to be an active spritual force today. The central domed burial vault at Mahan completed in 1437 was erected by Ahmad Shah Bahmani king of the Deccan and one Shah Nemat Allah’s most devoted disciples. 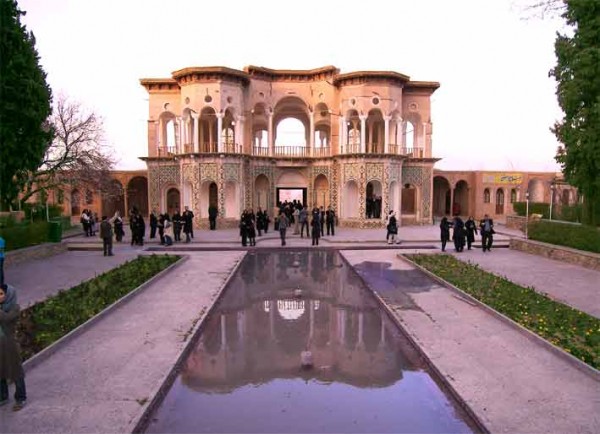 Shahzadeh garden meaning Prince garden is a historical Persian garden located near Mahan in Kerman province. Shahzade Garden in 5.5 hectares with a rectangular shape and a wall around it.It consists of an entrance structure and gate at the lower end and a two-floor residential structure at the upper end.The distance between these two is ornamented with water fountains that are engined by the natural incline of the land.The garden is a fine example of Persian gardens that take advantage of suitable natural climate.