The road was extended after Kharanagh from Rizab, Saaghand, Robat-e-Posht-e-Badam, Robat-e-Khan and Robat-e-Kavir, This 350 Km rd by the southern of Kavir desert finally joins to Tabas that is a desert. 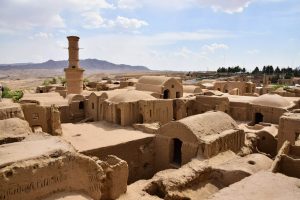 Kharanagh, with its 2000 height has created an exceptional and suitable for the residents on the other hand, a mild climate.

These dry and desert climate factors of the height are the most significant basic residenting over Kharanagh village. “Kharanagh village background is older than Yazd. It was called Khovarnagh before, and Zerostion people lived in this place. This village is located in the steep and the oldest houses were built into a castle. There are 620 persons in the amazing village. It has the kinds of corns. There are the governmental offices here too. There is a car road that joins to Naein and Yazd “. 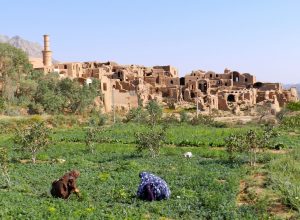 This village is empty of residents, now the people moved up the governmental houses made. But there are a few people who are living in the old houses of course, with a little change. The old houses were located in one or two floors close together on a fast steep. It has an especial crowded view. The people are different from each other economically. There are only 200 houses with small size and without any yard. They have simple detail. Stables are detailed too. Animals are kept downstairs but the Bourjoi houses are usually contain particular internal- external rooms with large yards and they have enough strength that were not ruined completely. 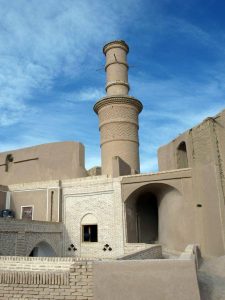 All poor and rich houses are basically stones that have been brought from along distance of mountain. Walls are constructed by raw-brick or mud. Roofs, doors, windows are whole wood. There is no public building over here but it has only a great mosque that was constructed by Tymour erd. It has been repaired during the past years but it is safer than the other houses so far. A temple of a mosque with its height plays the role of a guide that is seen from about far away.

The zig-zag streets with their different dimensions have a joint entrance considerably. They have a suitable formation view in the said complicated houses. Difference height from bottom to upper side of the village is too much. This difference with its suitable sample has made the streets a nice look. The covered side-walks (pass from under houses) are so difficult that a man mounted on a horse is nearly impossible. In view that none of a group mounted horses will be able to go in. in addition it is said that these complicated houses look like a castle protect all the residents (of course after walls and castle). 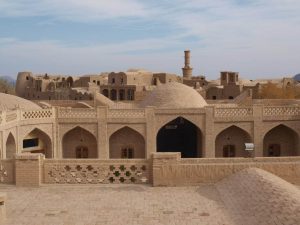 The remained old walls, castles and the other residences have had a protection task against wild and tribal people attack. Creating this protection of devices in the village that is fashionable the other parts of Iran is a detail of the resident’s culture.

Kharanagh has had a very hard life based on, quotations, during old years this place has been invaded or destructed by attackers many times but due to particular strategic condition and its geographical climate position furthermore, passing caravans over here, and rulers and militarists policy had a strong effect economically, the village be furnished again.