Chak Chak is a village in Rabatat Rural District, Ardakan County, and Yazd Province, Iran. Chak Chak is one of the most ancient famous places of Zoroastrian pilgrimage center, also know as Pir-e Sabz, which dates back to pre-Islamic preriod. In 2006, its existence noted, but unfortunately its population not reported. Also, In the desert of central Iran, there is a highly sacred mountain that is Located near the city of Ardakan in Yazd Province. It is located amongst the mountains of Ardakan and Anjireh on the way to Tabas, about 46 kilometers from Yazd.

Moreover, Yazd Chak Chak temple is one of the holy places of followers of the Zoroastrian religion and major destination of religious tourism in Yazd city. Besides, this temple has the highest level of attention, Sacred, importance, and value, and attends special days of worship, prayer and fulfillment of its special rules of religion. 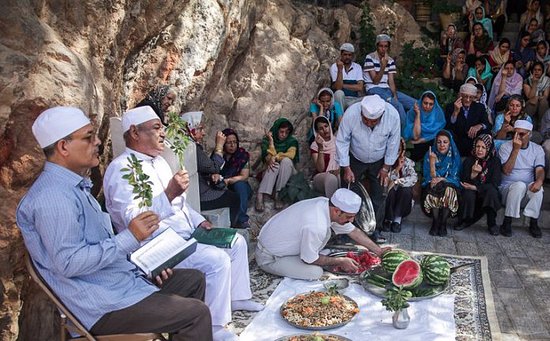 Chak Chak at first the name may sound weird, but let’s take a deeper look into its meaning. So, Chak, Chak is the sound of the water drops pouring down on a surface. Also, literally, you can consider it as Drip-drip. Besides, its history and the myths and legends surrounding it, all have old, interesting stories behind them.

Moreover, Fire Temple is one of the most sacred places of Zoroastrians and the most important destination of their religious tourism in Yazd. Besides, it has high attention, sanctity, importance and value and special days of the year to worship, pray and perform its special duties in its religion.

Furthermore, the place also know as Pir-e Sabz (Green Pir). Pir in Persian refers to a site of pilgrimage, normally one of the Zoroastrian faith. Pirs range from localized devotional sites to major centers of worship.

Besides, there is an ancient old tree here as well which is considered sacred by Zoroastrians. This tree has been grown right in the middle of a rock.  Its emergence from a place where only there are stones and rocks is a natural wonder. For this reason, many legend and stories have been formed around the tree as well as the mountain.

The wondrous ever-dripping spring located at this mountain is the main reason why they call it Chak Chak. Also, the water coming from this spring has turned this mountain to a green place in comparison to the desert area surrounding it. Moreover, the temple is constructed right where the drops are coming from. The Zoroastrians consider them as sacred and collect them as blessings. 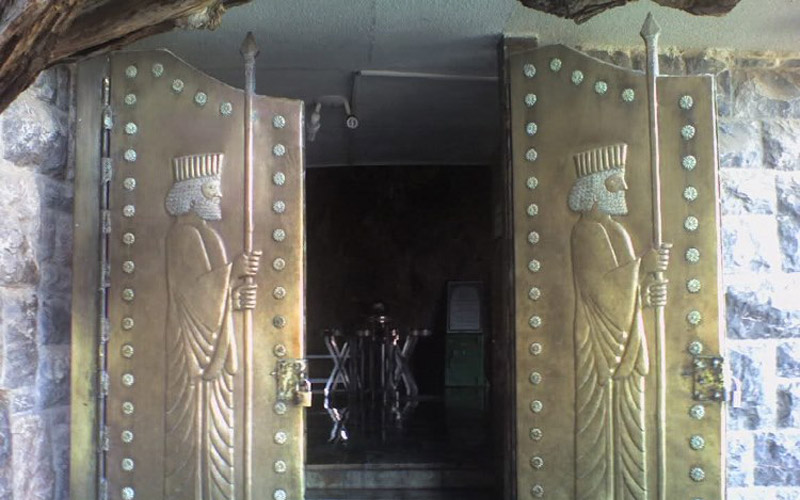 Meaning “drip-drip” in Persian, Chak Chak is to be derived from the sound of dripping water in the cave which contains the shrine. Also, legend has it that these drops are tears of grief that the mountain sheds in remembrance of Nikbanou. Besides, there is an immense and ancient tree said to be Nikbanou’s cane.

Nikbanou, the second daughter of the last pre-Islamic Persian ruler, Yazdegerd III of the Sassanid Empire, cornered in Chak Chak in 640 CE, in Zoroastrian belief. Also,the picture is that the Nikbanou prayed to Ahura Mazda to protect her from her enemies. It is interesting that the response to Nikbanou’s pleadings, is the mountain opened up and sheltered her from the invaders.

Moreover, there is a Notable feature of this village which contained the ever-dripping spring located at the mountain. In addition, there is a Legend that these drops are tears of grief that the mountain sheds in remembrance of Nikbanou. Also, some believes that a petrified colorful cloth from Nikbanou was also visible in the rocks, although pilgrims have since removed it.

Chak Chak temple revered for its spiritual values in the hearts of the followers of the ancient Iranian religion. Also, the fact that caves and cracks within the rocky slopes of the mountains had long been a refuge for spiritual people to sit in, in absolute isolation and meditate should come as no surprise.

Moreover, each year from 14–18 June Zoroastrians from all over Iran and the world gather in this sacred temple to celebrate and pray. In addition, entering this sacred place also has certain customs, like all other religious shrines. So, Pilgrims have to stop riding the moment they catch sight of the temple and complete the last steps of their journey on foot. Also, it is necessary to enter this place and pay tribute, wear a hat and remove the shoes. Besides, people who are not clean (haven’t done their physical cleansing) will not allow to enter the temple.

In addition, it serves as a pilgrimage point for pious Zoroastrians from Iran, India and other countries flock to the fire temple at Pir-e Sabz.

So, once there they light candles in line with the Zoroastrian belief that fire symbolizes God’s light and under the credo of “good thoughts, good speech, and good deeds”. Also, large groups of pilgrims stay in residences built by the local Zoroastrians of the village of Sharif Abad.

The actual temple of Chak Chak a man-made grotto sheltered by two large bronze doors. Besides, the shrine enclosure floored with marble and its walls darkened by fires kept eternally burning in the sanctuary. Also, in the cliffs below the shrine several roofed pavilions constructed to accommodate pilgrims. Moreover, the entrance of the temple is reached through a two-planked doorway over which stands an embossed image of two Achamenian soldiers.

Furthermore, the Temple cut into the cliff-side at the top has a wonderful brass door that embossed with the likeness of Zoroaster. Also, the temple has an altar in which there are three oil-burning lights with a container of oil right beside them. Besides, in front of the altar,  a set of trays combined in such a way as to look like a lotus flower from above and serves as a place to receive donations from pilgrims.

In addition, there also some window-like open spaces or holes within the cave over which huge branches of the nearby tree extends inside the temple and a small water fall that keeps the stage of the alter wet (upon which no one allowed to step

Moreover, the interior of the Chak Chak temple is rather simple. Also, there’s the dripping water, a painting of Ahura Mazda and of course the eternal flame, a none separable part of any Zoroastrianism holy place. Besides, there’s also a huge tree outside the temple known as Nikbanou’s cane. Other than that it’s really the spirit and back story that attracts visitors. Not to mention, the views from above the temple and the pin-drop silence of the desert is just divine!

Let’s have a look at our Iran Travel Guide and read about Iran. Also you can rely on our Iran Tour Operator and have the best memories in Iran. Review our Iran tour packages and choose one before you travel to Iran. Please feel free to contact us regarding any issue on your mind.