The new bridge on foundation of old bridge was constructed in 1650 CE or so by Safavid King Shah Abbas II. The bridge links the Zoroastrian quarters and north banks, through Zayandeh River.

There are multi-purpose for constructing the bridge. Khajou Bridge is known for its Persian architecture specially its artistic painting and tile work. A pavilion was inside the bridge, in which Shah Abbas used to sit and admire the view.
Khajou Bridge is considered as one of the finest constructions and it is an example of Persian architecture. It is 132-meter long and 20 meters wide also acts as a dam, hence has sluice gate. It provides water to surrounding areas, through series of water channels. The sluice gate helps a lot to regulate the flow of water. 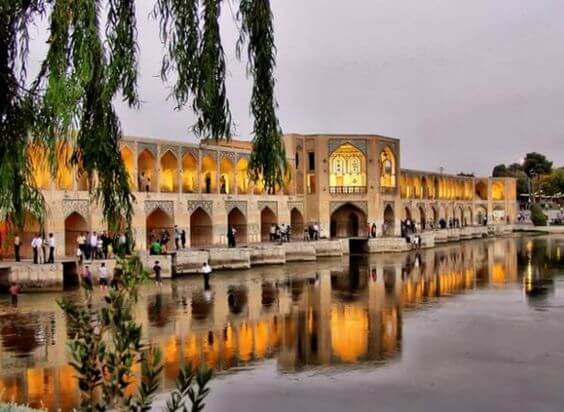 The main purpose for building this bridge is connecting Hassan Abad and Khaju districts to Takht-e Foolad Cemetery and Shiraz road. The stones, used in construction of this bridge, are two meters long and the most material for building it bricks and stones.

The upper level of khaju bridge was used for pedestrians and horse-carts in the past. There is an octagonal pavilion at center which is used for art gallery and teahouse. The lower level is also used as pedestrian way or just a shady place to rest. In 2008, Khajou Bridge was named as world’s ‘multifunctional bridge’. It also joined the list of most amazing bridges of world in the same year.

By this  travel agency in Iran, you’ll get the answer to the question: where is Iran?

You can visit this place through the following Iran tourism packages offered by Iran Destination, Iran Travel Agent: