To visit the Temple of Chogha Zanbil Ziggurat, you must travel to the south of Iran. Also, temple located in Khuzestan province between the ancient cities of Shush and Shushtar. So, if you want to know exactly where the Chogha zanbil Ziggurat is, we have to say that 40 km southeast of Shush and 35 km west of Shushtar city.

Moreover, the influence of these peoples in Iran’s history is to the extent that they taught the Achaemenid kings a line. Also, even Elamite was the first official Achaemenid language used in writing and commerce.

In addition, the Elamite tribes fought mesopotamia, Babylonians, Assyrians and Sumerians for many years. Also, they eventually permanently destroyed by the attack of Assyrian King Ashur Banipal. Besides, one of the most important buildings built by this people is Chogha zanbil Ziggurat or the Temple of Chogha zanbil.

Ziggurat literally means high and long place. Also, Ziggurat temples built by Western Asian governments for worship 2,500 to 4,200 years ago. Besides, they believed that the gods were the keeper and guardian of the city.

In addition, in the Elamian government, God believed that Inshoshinak was the protector of his city and had built it to worship him. Also, these buildings constructed in multi-story form, on high hills for proximity to the gods from clay and mud bricks. Also, the special feature of these temples is the smallness of each floor comparing to its previous floor.

Actually, they can see from each side as staircases. Also, in Ziggurats, they kept statues of the gods and held their religious ceremonies. Bsides, in Akkadi, it called “Ziqurto”, in Sumeria, “Ziqurat” and “Elamites” called “Ziqurto”.

When Untash Napirisha came into government in the 13th century BC, he ordered the construction of the city of Dor Ontash. Also, the city had three fences on the adobe and its main gate was on its big fence. Besides, in the center and highest place of the city, the Temple of Chogha znbil Ziggurat located.

In addition, between the first and second fences, small palaces and temples built. Also, between the second and third fences, it was the site of king’s palaces, royal mausoleums and the city’s water treatment plant.

Furthermore, under one of these palaces five underground tombs have discovered. Also, it is interesting to know that one of the oldest water supply facilities in the world is this refinery. Besides, at that time, by digging and creating canals, they provided water for the city from the Karkheh River.

One of the reasons Chogha zanbil Ziggurat is its water supply system. Also, you know that the Dez River was passing near the temple. So, it was not possible for the residents of the city to use it. Besides, on the orders of Ontash Napyrisha, they had drawn a channel 45 kilometers from Dez River to the city.

In addition, Water was muddy because of the passage of Haft Tappeh and Khuzestan plain .Also, it needed purification for people to use. Besides, near the outer fence of the city around Ontash, there is a large reservoir outside the third fence and a pond inside it, connected by small streams.

Moreover, the water that reached the city via the Dez River canal entered this external reservoir. Also, Water in this reservoir made up of several layers including sand, gravel, charcoal, etc. Besides, past and refined into the dock inside the fence. 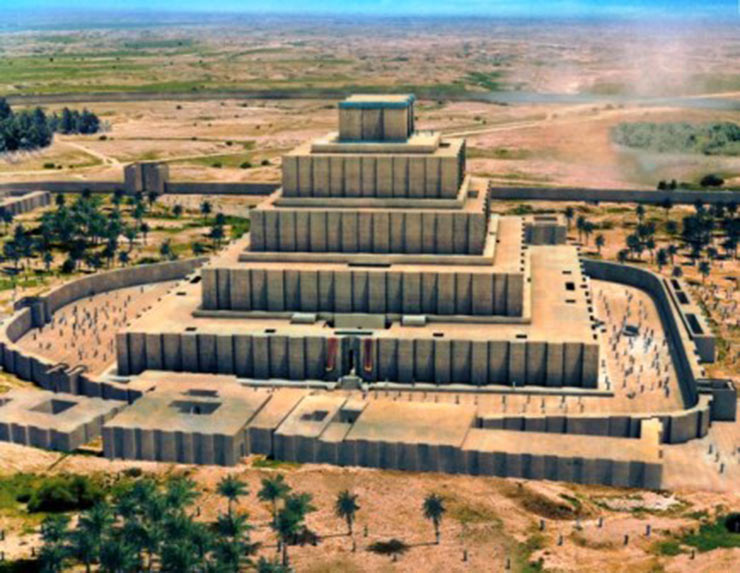 The reason for naming the Chogha zanbil Ziggurat

The ancient name of the building is “Chogha zanbil”, a compound word. “Chogha” means “hill” and “zanbil” means “basket”. Also, the appearance supposed to be located on the hill as a reversal. Besides, it called the “Dor-Ontesh”, the “fortress of Ontesh”, the king of the Elamian.

Characteristics of the Chogha zanbil Ziggurat

As mentioned above, Ontash Gal had ordered the construction of the city of this religion. Also, in the middle of the city and the highest place was the Chogha zanbil Ziggurat. Besides, its initial height was 52 meters in 5 floors. Furthermore, today, only 25 meters and 2.5 floors remain.

Moreover, the building of the Chogha zanbil Ziggurat is a square with a sides of approximately 105 by 105, surrounded by circular fences. Also, on all the bricks of the temple, the same text written in a clove line stating the king’s name and his purpose in building the temple.

In addition, the great difference between this temple and other Zigguraths discovered since then, is at the foundations of each floor. Also, in this way, the classes of Mesopotamian Ziggurath built together. So, the floors of the Chogha zanbil Susa temple created, each on the ground and separately. Besides, except for the first and fifth floors, all floors filled with clay. The fifth floor has been the place to place idols.

One of the antiquities of the Elam period is the lithograph of the Ontash Napyrisha Memorial. Also, this ancient lithograph plays an engraved woman with fish tails and two snakes in her hands. Besides, you can see above the full picture of the lithograph, the druids of the temple passing by. Furthermore, it made of sandstone from 1961 to 1921. In the 12th century BC. So, it brought from Chogha zanbil  Ziggurats to Shush, and today it is in the Louvre.