The Kerman Ganj ali khan Bazaar: with is a  beautiful manifestation has left as a memorial from the ancient periods and its architecture characteristics astonish the eyes of every visitor. Stretching for 1200m from Tohid Sq, northeast to Shohada Sq, Kerman’s Grand Bazaar is one of the oldest trading centers in Iran.
It is made up of four smaller bazaars and a further 20 or so branch off to the north and south and easy to navigate and has a vivacity that should keep you interested, especially in the morning and late afternoon.
At the end of the Bazaar you enter a courtyard. This courtyard is home to what was once Kerman’s most important bath-house, Ganj Ali Khan bath-house, now restored and transformed into a museum. Wonderful frescoes adorn the walls and wax dummies illustrate the workings of a traditional bathhouse. The reception area was divided so men practicing different trades could all disrobe together. Kerman Ganj ali khan Bazaar

There is a Bazar-e Mesgari Shomali (Coppersmith’s Bazaar) in the courtyard on the north side, and at the square’s northeastern end is Masjed-e Ganj Ali Khan, Ganj Ali Khan’s lavishly decorated private mosque. Also there is a Next door, Golshan Caravanserai has recently been restored and is now home to a bunch of antiques stuff. 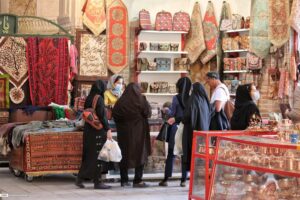 In the first steps you take to Kerman Bazaar, you will encounter exactly the big span of Nagarkhaneh Bazaar from Arg Square, which has a large ceiling and cold, decorated tiling and has several rooms at the top. The architecture of different parts of this market is related to the Qajar era.

One of the masterpieces of Iranian architecture and the turning point of Kerman Bazaar is Ganj Ali Khan Bazaar in Kerman. According to valid documents, the complex was built on the old bazaar of the city. Ganj Ali Khan’s collection is a striking example of Safavid architecture and was built between 1005 and 1029/1929 during the reign of Ganj Ali Khan over Kerman and by the order of Shah Abbas. The designer of this collection is a work by Professor Sultan Mohammad Memari Yazdi. The market is located between four souks and the optional market and in the southern part of Ganj Ali Khan Square. Kerman Ganj ali khan Bazaar

Four Ganali Khan souqs are located at the intersection of two directions of bazaar, which is considered the most important and high-traffic point of Kerman city due to the collision of the two-way intersection of bazaar at the site of Ganjali Khan’s four souks in the past. Due to the fact that about 400 years have passed since the drawing of this building, it still retains its beauty and before the entrance of new architecture and interference of Western architecture, the domes of the bazaar were interconnected as a band and were one of the highest buildings of the city after the Grand Mosque and was one of the highest domes in the city. Kerman Ganj ali khan Bazaar

At the southern end of Ganj Ali Khan Bazaar and up to the beginning, Vakil Bazaar is also the fourth part of Kerman bazaar called Ekhtiari Bazaar. This market is one of the least wide and tightest markets in this complex, which is also the oldest part of the market and its importance is due to being located between the two valuable markets of Ganj Ali Khan and Vakil. One of the most important parts of this market is chehel sotoun mosque, Golshan caravanserai, three sardari bazaars and at the end of which vakil traditional bath or tearoom is also mentioned.

Kerman bazaar from the east reaches the long market and vakil complex. It is located at the end of the optional market and the lawyer’s collection. On the orders of Muhammad Isma’il Khan Vakil al-Mak, the ruler of Kerman in 1282/1856, and his son, Morteza Quli Khan, a second lawyer, and his descendants, a large complex consisting of caravanserai, bazaar, bath, mosque, which is still called Vakil, and its market is one of the most beautiful markets. The commercial section, called Vakil Bazaar, was located between the Jame Mosque and the Citadel. One of the most important elements of this market is vakil bath, vakil caravanserai, courtyard school, two Caesarea (first and second) and Vakil Mosque. Kerman Ganj ali khan Bazaar

From the northern gate of the old city of Kerman, you would reach the dear bazaar. Today, only the name of the dear bazaar remains and the reason for this was the position of the market, which has also been destroyed throughout the history and expansion of the city.

On the northern side of Ganj Ali Khan Square and along the Kola Mall, the northern copper market is also located. Kerman Ganj ali khan Bazaar

This market complex was along Aziz Bazaar and Shariati Street, which extends south to the shoemakers’ bazaar. The most valuable elements of the Haj Aqa Ali complex, apart from its market, can also mention water storage, caravanserai and Chehelsavan Mosque, which are located in this complex.

The westernmost part of Kerman Bazaar is the Arg Bazaar, which starts from Arg Square and ends with four Ganj Ali Khan squares and surrounds Tohid Square like a rectangle. This market is divided into two sub-sectors: Nagarkhaneh Bazaar and Saddlery Bazaar. This market has been the site of serajs and luggage makers in the past. Kerman Ganj ali khan Bazaar

As we said, this market dates back 600 years and its architectural style is very rich and valuable. According to many tourism experts and researchers, this market is the largest and longest market in Iran and in the past kerman market has been the place of buying, selling, exporting and importing this province. Fabrics, copper containers and all kinds of handicrafts of Kerman were exported to China and India and from there, spice and fabric were imported.

Iran tourism is very attractive for tourists from different parts of the world. These trips are held in the form of the 10 best Iran tours & trips 2022 to several destinations in one region. Also, sometimes tours from the north to the south of Iran. Iran tours are very attractive due to the conditions of the event. If you are planning to visit Iran, be sure to participate in these tours. Of course, Nowruz tours in Iran are much more diverse. Also, you can take full advantage of  holiday for Iran tours. Kerman Ganj ali khan Bazaar