Ahvaz is one of the unique tourism cities in Khuzestan province that enjoys a very good geographical location in this province. Besides, the existence of different cultures and ethnicities along with tourist attractions and food diversity has provided a position to become one of the most important cities in Khuzestan province. So, introducing Ahvaz city is very important. Also, Ahvaz divided into two parts by the Karun River, which on each side you can see the spectacular areas and different features of the city.

In addition, Ahvaz has a variety of Arab, Lur and Bakhtiari tribes that live side by side. Furthermore, Ahwaz has a variety of weather conditions, but its best season is winter and spring, which is usually not dusty and has a very beautiful nature. Moreover, the existence of different cultures and ethnicities in this city has caused a high variety of local and traditional cuisines in Ahvaz. In this article, we will be familiar with the city of Ahvaz, its tourism areas, geographical location and food culture. 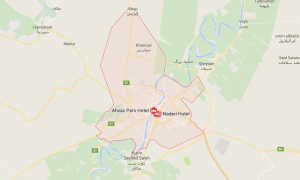 Ahvaz is one of the metropolises of Khuzestan province, which has a very high diversity of ethnicities. Furthermore, Ahvaz is the analog of “Avaz” and “Avaja” which appear in Darius’s epigraph. This word appears in Naqsh-Rostam inscription as “Khaja” or “Khooja” too.Besides, Ahwaz is one of the most beautiful and living cities that has a unique beauty on its nights. Also, the city has various petrochemical and national drilling companies, which economically creates a good position for the city. Moreover, people know Ahvaz with the Karun River, which is one of the most important parts of Ahvaz city and is usually operating all day long. In addition, the language of the people of Ahvaz is Persian, but due to the diversity of ethnicities, you will definitely encounter different dialects such as Bakhtiari, Shushtari, Abadani as well as Arabic.

Ahvaz located in Khuzestan province and in the plain section. Besides, the city is 18 meters above sea level and with an area of nearly 20,000 hectares is one of the large cities of Khuzestan province as well as Iran. In addition, the Karun River in Ahvaz originates from the Bakhtiari Mountains, divides the city into two parts. Also, the city has a different land and air connection with other parts of the country and connects different ports.

Ahvaz is the largest city in Khuzestan province, which has different ethnicities. According to the latest census, the city has a population of 2,000,000 and has almost 5 percent of the province’s total population. Also, by passing through the markets and streets of Ahvaz, you will see different tribes and tribes that generally fall into three categories: Turks, Lur and Arabs. Bakhtiaris and Arabs are the highest number of people in the city.

Ahvaz has a variety of climates due to its geographical location. In general, the province classified in two plain and mountainous regions. So, Plain parts include the southern regions of the province, and mountainous parts include parts of the north and east. Also, this has caused the province’s cities to have a different climate. Ahwaz is one of the four-season cities that has its own beauty every season. In general, winter and spring are the best seasons in Ahvaz, which enjoys a very pleasant climate.

Karun River is one of the great rivers of Iran that divides the city of Ahvaz into two parts. Also, this division has created different regions and neighborhoods in Ahvaz. In general, the western part of the city includes more populated areas such as Kianabad, Golestan and Kianpars. Besides, Clock square is one of the famous squares of Ahvaz considered as the central core of the western part. Moreover, the eastern part of Ahvaz city mostly includes shopping malls and different markets, of course, famous residential areas such as Zeytoon Employee, Naft Town and Cyrus are also located in this section. For shopping in Ahvaz, you will definitely have to go to western sections such as Shariati, Naderi Street (the most famous street and bazaar of Ahvaz), Azadegan and Imam Street.

Ahvaz is one of Iran’s industrial and oil-good cities, which has many immigrants for this reason. Also, the city suffered many destructions during the imposed wars, but it remains in place after reconstruction. In addition, Ahvaz is one of the four-season cities that has become one of the major tourist hubs along with its diverse tourist attractions. From historical centers to different markets and imamzadehs, each of which has its own beauty. So, in this article, we are going to familiarize you with some of the most important landmarks in Ahvaz.

One of the most traditional markets in Ahvaz is a market called Abdolhamid Bazaar located in the eastern part of Ahvaz between Imam Khomeini and Naderi streets. Moreover, in this market you can visit Sheikh Khazal’s caravan house. In the past, Abdolhamid Bazaar was one of the main central markets in Ahvaz usually the place where the city’s elders and wealthy people commuted. Also, this market is currently operating as one of the local markets of Ahvaz and located among the cheap markets of the city.

Museum of Contemporary Art is one of the tourist attractions which operates in 2 floors with its different galleries. Besides, the museum started its activity in 1959. Moreover, different works of artists from Khuzestan province and other provinces are kept in this museum, which is not free of grace. Along with its cultural aspect, the museum is witnessing various seminars, conferences and courses.

Another spectacular attraction in Ahvaz called Pol-e Sefid. Also, it referred as the suspended bridge, which considered as one of the most important bridges in Ahvaz. In addition, the bridge dates back to 1936, located on the famous Karun River. Besides, the suspended bridge is beautiful, especially at night when you will see a lot of tourists on the side. Furthermore, this bridge has been registered as one of the historical monuments of Iran due to its historical history.

You may have heard a lot about The Tri-Ear University of Ahvaz. The University of Tri-Eared or The University of Literature of Khuzestan Province is located near the Karun River. Besides, the building has oprated with different applications over the years. Also, initially, he began his activities as the National Central Bank and then became governor. And later, the building used as a medical school at Jundishapur University. Moreover,it is working as a university of literature. Of course, the building is now without any activity and due to its long history, it suffered various damages that are currently being refurbished.

Lashkarabad is one of the famous districts of Ahvaz, located in an Arab neighborhood. In this neighborhood, you will see various food shops such as falafel, samosa, and fried mushrooms. Also, most of these shops are self-service and you can enjoy the most delicious falafels in Khuzestan.Besides,  Lashkarabad is a large street that has formed from the beginning to the end of various falafel shops.

Different cities of Khuzestan province have different local and local cuisines, although some foods exist in all cities of this province. Besides, the traditional cuisine of each city is tailored to the vegetation, culture and climate of that region. Also, Food diversity, such as spectacular attractions, hotels and handicrafts, is one of the most important features of a city. In addition, this city has a great food culture, which is due to the large diversity of ethnicities in the city.

Moreover, most of the city’s cuisine is spicy and has a completely unique color and smell. Also, Fish-made foods are usually the most famous foods that are cooked in different ways. Other popular cuisines in the city include samosa, shrimp, pakura, ranginak, nafeleh, saboor fish, hamis cub and alkaline fish. So, we are familiar with some of the famous foods  and their ingredients.