Did you make your decision and chose Iran as your travel destination? We want to tell you about Ancient Necropolis of Iran. Are you interested in experiencing that? what do you know about Iran destination tour one of the most famous Iran travel agency in shiraz and also Iran? This is great and you can be sure that the most exciting experiences will be waiting for you. In this article, we introduce all the requirements to travel to Iran. Also, the do’s and don’ts of traveling to Iran. Also, we answer this question: how to travel to iran.

About Necropolis or Naqsh-e Rustam

Ancient Necropolis, Shiraz is a spectacular historic city, from Persepolis to Pasargadae, saadiyeh and hafezieh, etc., that if we want to name all of them, we need to present a long list above it. One of the ancient artifacts that we intend to introduce to you here is the role of Rustam. The role of Rostam in the mountains of Haji Abad, and in 5 KM Persepolis is one of the most important tourist attractions in Iran can be considered that the high share in attracting tourists, domestic and Foreign, there is. However, some historical monuments of the Elamite, the Achaemenid and the Sassanid era have been carved on the mountain.

In the role of Rustam, you can see the works of Elamite, Achaemenid and Sassanid eras. In addition, the Tomb of several great Achaemenid kings such as Darius and Xerxes, Ardeshir I and Darius II in the role of Rustam. Apart from these, very beautiful roles from the coronation era Ardeshir Babakan and the first Shapur victory to the emperor of Rome was seen.

In the case of tombs it should be said that the entrance doors of the tomb are square in shape. These doors were locked in ancient times by large stones located behind the door and are actually sealed. Everything is similar to these 2 tombs, even their appearance, and the only difference is in the inscription on top of the Tomb of Cyrus the great, and not in the Tomb of Xerxes. This inscription written in cuneiform and is said to be where Darius the great praises Ahura Mazda and talks about his thoughts. 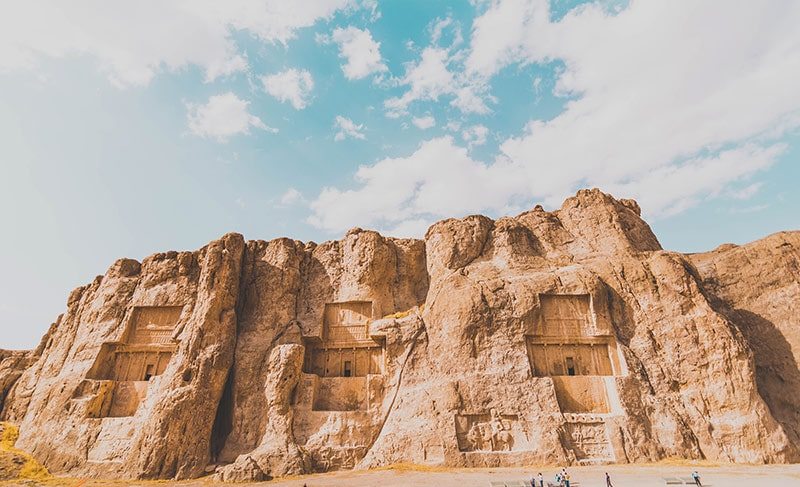 The distance from Tehran to Naghsh Rustam is about 850 km. To go to the role of Rustam Shiraz from Tehran. You must enter the Persian Gulf highway on the route to the south of Tehran. Passing through the provinces of Qom and Isfahan, you will get to Fars province. During this distance, you will pass the cities of Qom, Kashan, Natanz, Isfahan and Abadeh. After reaching Pasargadae, continue your path towards bliss in the city.

From the west side of Saadat Shahr, move on marvdasht-Saadat Shahr highway to the outlet of shul and Zangi Abad villages. This exit on the right side of the road brings you to the role of Rustam. To travel the role of Rustam from the northern cities. You must pass Tehran, western cities of Isfahan, southern cities of Shiraz, East and Northeast cities of Kerman and Yazd. So choose the best route according to your location.

The distance from Shiraz to Naghsh Rustam is about 70 km. If from the south of the country to the area the following: from the city of Shiraz in the direction of North to Beltway marvdasht go, and from the south, highway, marvdasht-Bliss city to output the village Scholl continue and then turn left up to the role of Rustam reach. The role of Rajab and Persepolis on the opposite side of Rustam’s exit is located on marvdasht-Saadat Highway. Due to the proximity of the buildings to each other, you can to visit them in one day, plan to see … but keep in mind it needs to be after an overnight stay in one of the towns around these attractions, etc. early in the morning to visit the way in. Visiting Persepolis and Rostam can take up to a few hours according to your interest.

The role of Rustam Shiraz in Fars province one of the main ancient centers left from the Achaemenid era. Other monuments of the Gulf, such as attended. Persepolis and the role of Rajab is also buildings the same area. The role of Rostam in the schools and careful review of these areas by historians and archaeologists. The findings of historical acceptable from the era of ancient Iran, provided they have. In the region, the role of Rustam except for the remaining works of the Achaemenid period. Also, prominent works of other historical periods also seen, which doubles the importance of this area.

Naghshe Rostam, Shiraz, as the location of the tombs kings of the Achaemenid know.  But today, for historians and archaeologists, the importance of this area during the Sassanian specified. In aerial shooting, the remainder of the Sassanid tower and the Barrow can clearly seen. The prominent Rostam roles have remembered since the Sassanid era.

The remains of towers and walls of the Sassanid period show the presence of castles limited to the mountains in this area during that period. Seven towers are located on the southern side and four towers on the eastern and western sides of the mountain. Also, The architectural style of this building is quite similar to the architecture of the Achaemenid period. Although the exact date of the construction of the castle is not clear, according to the historical information can be attributed to the era of the kingdom of Ardeshir and Shapur.

Naghshe Rostam, Shiraz, one of the areas of historical value to the left in the province is in the course of the kingdom’s most powerful kings of ancient Persia, in the time of national governments, Achaemenid and Sassanian., the boom and the glory of having been. Nowadays, this area considered as one of the most valuable historical documents in global civilization. 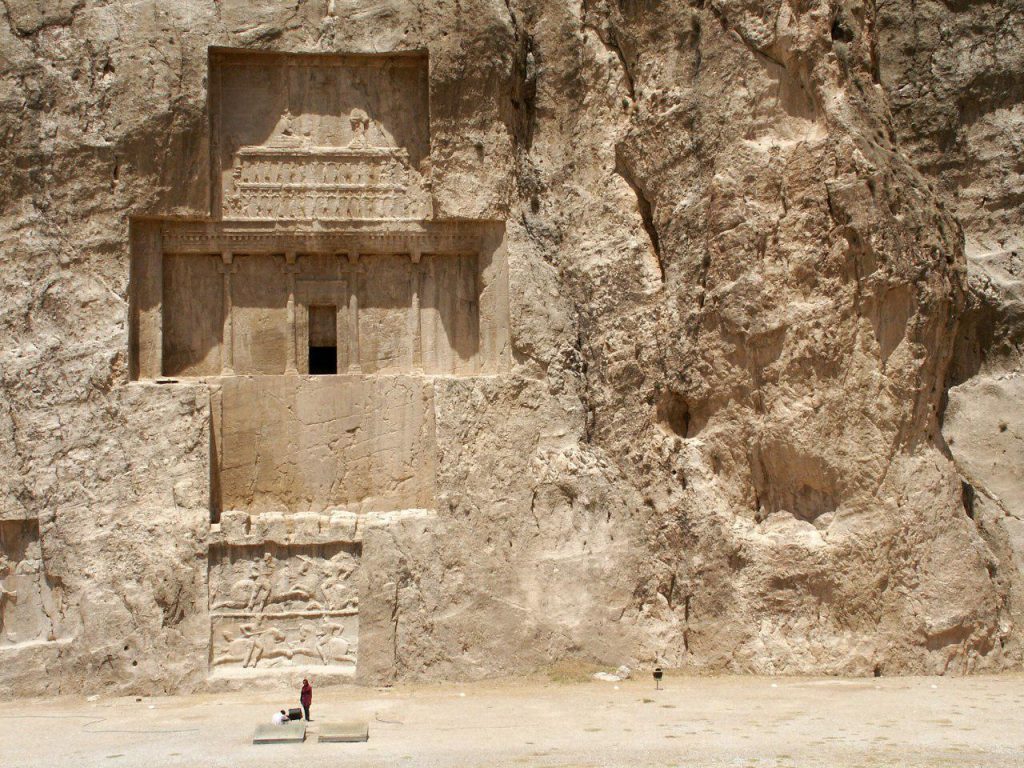 Inside of Ancient Necropolis:

As we mentioned earlier, inside the enclosure of the role of Rustam in Achaemenid. There are a series of ancient monuments of the Ilami, Achaemenid and Sassanid periods. This collection includes the stone writings, inscriptions, ancient tombs and the remains of the ancient Iranian monarchs. Also, The complex is located in the heart of the mountain and Mount Naghsh Rustam with a steep slope to the southwest stretches.

Nowadays, archaeologists believe that these monuments have been in the past. One of the two firetops is smaller than the other and is about one meter and 55 centimeters tall. The height of the monument adjacent and taller also to a meter and 75 cm looks like and examples of these two atashgah in other areas. Such as Pasargadae and Castle Rock Lionel Messi. Since these similar buildings belong to the Sassanid period in other parts of Fars, the atashtegan Naghsh Rustam also attribute to this period. Of course, there is the fire temples means fire, a chameleon, being the ancient Iranians. But also due to the great honor of Iranians to the natural element of fire in the past. Also, fire temples made were a place to worship them.

Consequently, At the foot of the mountain, the role of Rostam and at a distance of about 15 km from prominent role in the region and the role of Bahram, etc. Drilling neatly nurtured the Pentagon, paying attention, as it attracted, which seems to be local to stock up on water. Nowadays, the reason for the existence of this well in the past that it dug to supply drinking water. 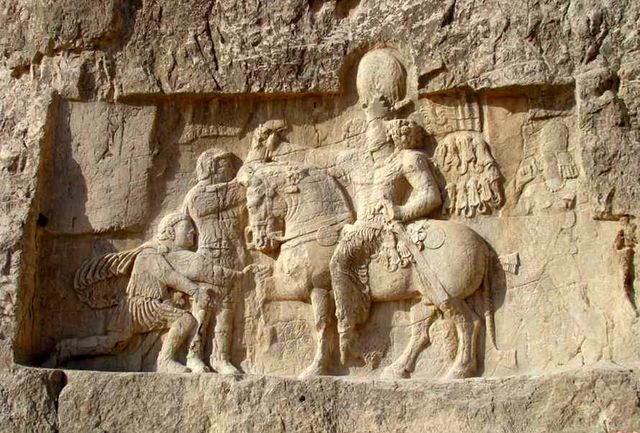