Abyaneh is a village in the central district of Natanz county, Isfahan Province. The village is one of the oldest villages in Iran which is also a cultural heritage in UNESCO. Moreover, this village is attracting numerous native and foreign tourists every year for its traditional feasts and ceremonies.

Travel to Iran (Iran Destination), The best travel and tours of Iran to desert destinations, the north and tourist cities of Iran are collected in the form of best iran tours packages2021 on Iran Destination website. You can join our team, Iran Destination, and get more acquainted with iran tours and all of the tourist attractions and all the best iran tours packages2021. Iran travel agency, Iran Destination, will organize your trip to Iran. You can offer your tailor-made trip to Iran or visit our programs on the Iran tour page. You can contact to our Iranian travel agency, our agents are online to answer all your questions about iran travel. visit Iran is a good choice to get Iran travel services such as hotels in all cities, Shiraz hotel, Tehran hotels and all services about Iran tourism.

Abyaneh is one of the villages of special and spectacular Natanz in Isfahan province. It is not only between domestic tourists, but also between foreign tourists are also fans and is often the subject of photography they are. Abyaneh is one of the few Iranian villages that Indigenous people continue to wear their traditional cover and preserve it. The red color of the ancient buildings of the village, located on the slope of the gray slope of the mountain, has made a double attraction to abyaneh. In fact, the combination of nesting alleys, various monuments, geometric windows, inlaid doors.

Since this tourist village has provided great accommodation facilities for travelers, you can easily enjoy it and spend a night with the indigenous people. 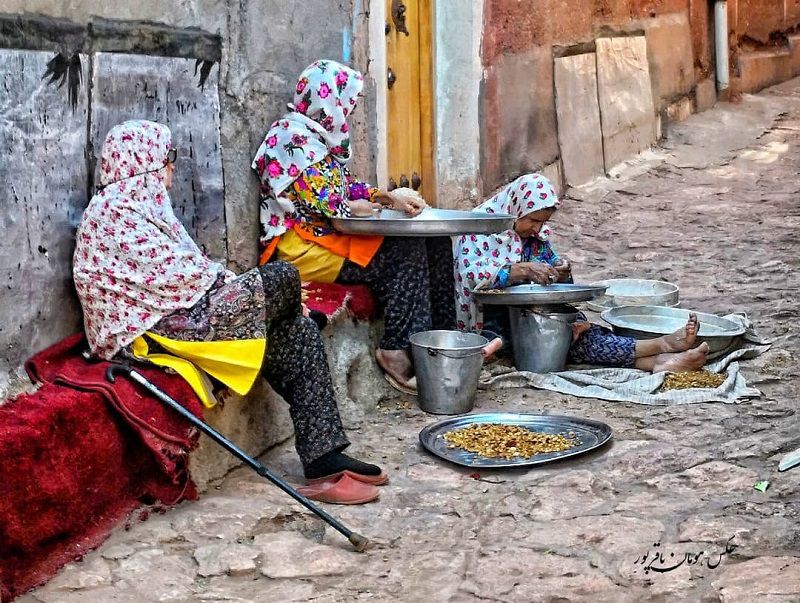 The life of Indigenous People passes through agriculture, horticulture and animal husbandry, which is done in a traditional way. Abyaneh women have an effective role in participation with men in economic affairs. Seven aqueducts, this village for irrigation of fields and orchards. It is that products such as wheat, barley, etc. a variety of fruit, such as apples, plum, pears, apricots, almonds, and walnuts are. Carpet weaving is another way of living in abyaneh. It has been prevalent in recent years and has led to the establishment of about 30 carpet weaving workshops. However, Shoemaker weaving, which once was considered a high-paying occupation of women in the village, is somewhat of a boom today.

The height of abyaneh village reaches 2,222 meters above sea level. And therefore has a cold and mild climate, while it is one of the tallest residential areas in Iran. There are foothills around the village that protect it from unfavorable environmental factors such as natural spent. The presence of springs and small rivers has led to the expansion of thickets and fields. And despite the desert climate, this area is favorable and good weather, and relatively hot summers and cold winters.

The texture of the village, form structures. And it uses the type of materials in, they also the same theme, cause a morphing rustic stairway with tissue dense and monuments connected together is that the foothills in the north, the village in the middle of the farms in the south and East, and it was discontinued. Structures and openings are also built facing the Valley and back to the foothills. Meanwhile, the main passages of abyaneh village are in line with the ground level. And the side passages designed in line with the slope of the land.

The mountainous areas of this region. And that the distance is relatively high from the Centers for Populous, the advantage is that people, a lot of customs traditional languages and dialects of old clothes, colorful, their well have preserved. The traditional attire for men abyaneh includes pants and long of black fabric for women includes a shirt, looming with fabrics damask. And charqad white, which is still among the people in vogue and on its bias they have. 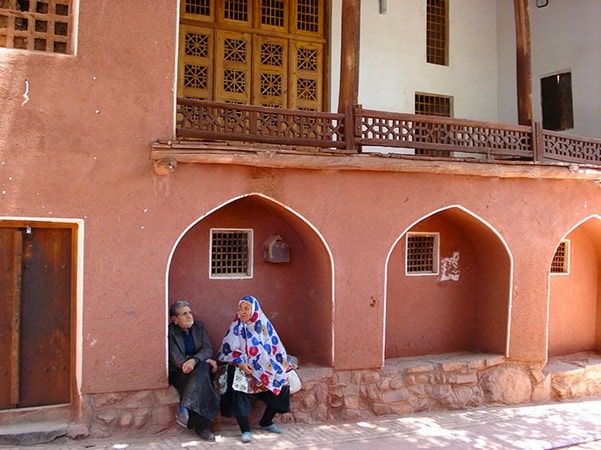 All the Houses of the villages on the slopes of Mount Vulture in the north of the river barzourd are made and architecture noticeable right. because just like houses, stepped, masouleh, the back of the Flat Roofing bungalow bottom is no wall around them is. as the yard of the Houses of the high function. For this reason, the village looks multi-storey. ‏

The room houses have windows, wooden sash windows. And in most of them verandas, and tarmiha wooden official announced on Sunday seen that due to the placement in the door tight and narrow, scenic, spectacular and interesting, there is the Guardian. Thick clay walls of houses are like a thermal capacitor and prevent high heat fluctuation during the day. Since the openings are only on one side of the structure, residents have built a ceiling skylight for their homes to provide light and ventilation.

One of the attractions of the houses is the red color of their exterior wall. It covered with red soil belonging to the mine adjacent to the village. Property of ochre in this is that the more the rain, eat, stronger one. just like the indigenous people of the village against natural disasters, to patience, the mountains, and the tenacity of the cliff, were, and so to the tradition and architecture and memories their ancestors love that they so far have preserved.

The texture of the village houses is “Cochlear” and dates back to the Seljuk, Safavid and Qajar periods. In principle, the alleys of the village designed to break the wind power, as narrow and zigzag and without a dead end, and walking in them and getting drunk in the smell of the soil, it is attractive for any tourist. 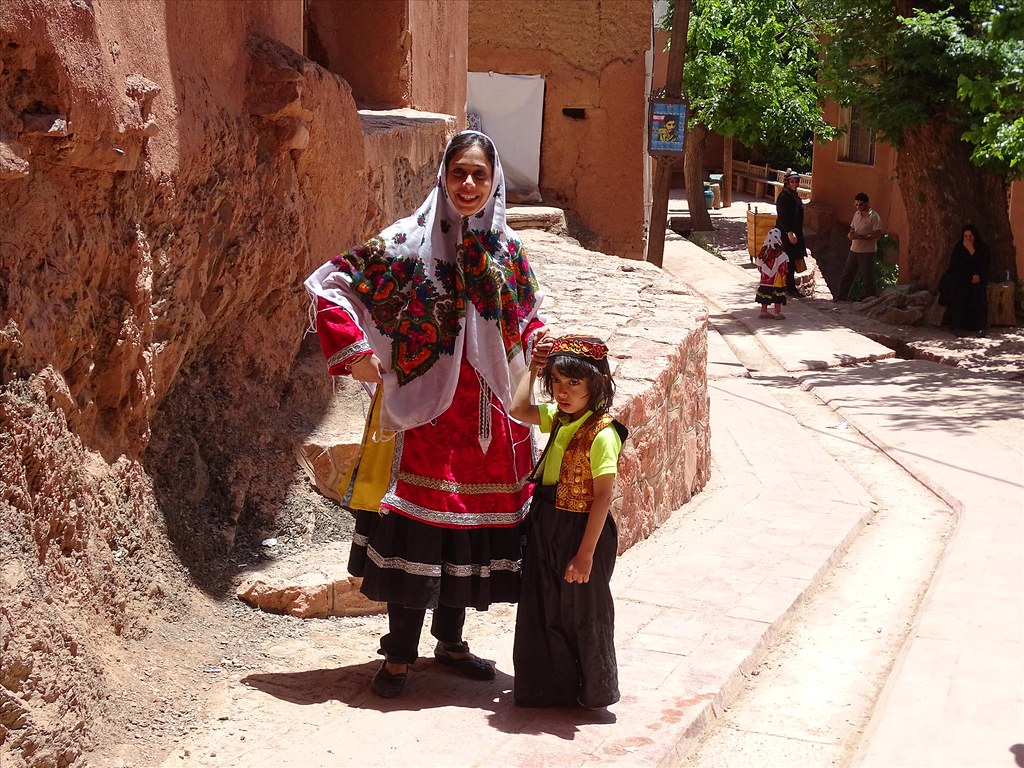 What makes abyaneh souvenir more special is the sale of them in the front of the village with wooden windows, while a number of villagers are sitting on the stairs and watching. One of the souvenirs of abyaneh, which made of nature, is lavash, which has a lot of fans among tourists. In addition to dairy, walnuts, almonds, apples and plums  also sold in the village.

Iran Destination is a well-known Iran Tour Operator which makes you the best trip to Iran. So before you travel to Iran, make sure you visit our Iran Tour Packages. Please feel free to contact us regarding any issue. Our Iran Travel Agency is ready to help you by any means.You can visit Abyaneh village through  Iran tour offered by Iran Destination, Iran Travel Agent.