Iran Destination is a well-operated tour operator in Iran which makes your travel to Iran easy. We suggest you to have a look on our  Iran packages tour.  Our Iran Travel Agency is ready to help you to travel to Iran. Following, read About waterfalls of Iran.

Waterfalls of Iran are one of the most beautiful natural attractions. The beautiful scene is the water flows from a high height to a low. In other words, on its path badly hitting hard cliffs and every drop gets thousands of particles. Water particles make the air cool and air-conditioned, which is why waterfalls become one of the most popular attractions until the scorching heat of summer arrives. Iran has more than 390 permanent and seasonal waterfalls, this website wants to introduce a number of the most famous waterfalls in Iran, to accompany the patrol.

Laton falls in Gilan province with 105 meters high is the tallest waterfall in Iran. To see this masterpiece of nature, you need to go 15 km south of Astara and Kota komeh village. The waterfall is 6 kilometers from the village and to get to it you enter a path full of beautiful Forest Hills and Cool Springs. Beside this waterfall is one of the most beautiful pristine forests, Gilan could see the woods that plum trees, etc.  the Apple, wild Walnut, pear and …

Access to Laton Falls is possible from two routes.

These two paths have differences.

This waterfall has a special feature that distinguishes it from other waterfalls, kyodeval, is the only mossy waterfall in Iran. To see the waterfall, you need to go 5 km southeast of Ali Abad ketol in Golestan province. The waterfall is located in the heart of the forest and on the hillside of Mount Aaron, and its water is from the Southern Springs, which is why it is transparent and clear.

Kabudoval waterfall is the only fur waterfall in the country. With amenities for tourists, this area is one of the most important resorts in Golestan province. Clear, transparent and drinking water from the northern slopes of Mount Aaron, with a height of 1780 meters, originates. To access the waterfall, go to the Forest Park and walk from the forest park entrance to the main waterfall kbvdval 20 minutes. Along the way to the waterfall, astonishing landscapes and wooden bridges along the flowing water and forest trees will delight you. 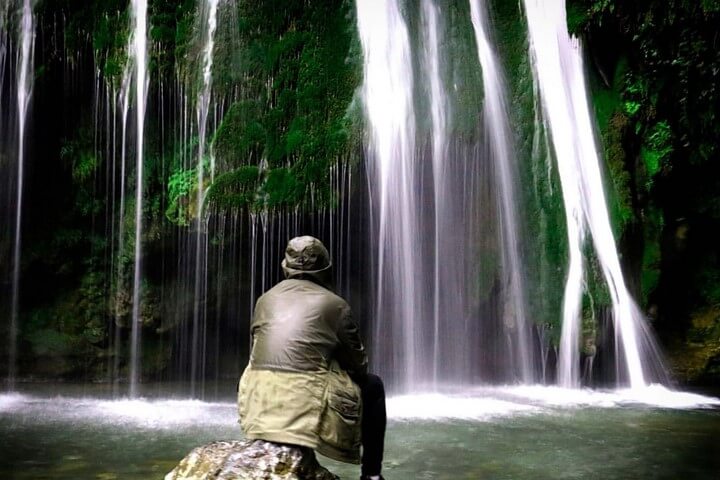 Meanwhile, The waterfall is located in the Raisi Castle of Kohgiluyeh County and is one of the natural beauty of Kohgiluyeh and Boyer Ahmad province. The waterfall is about 100 meters high in all seasons of the year. It is so beautiful that it is called the Iranian waterfalls bride. To visit this waterfall, you must take a road to the mountainous tortuous roads.  north of the city of dehdasht, cross the Oak Forest and after 70 kilometers to encircle the beautiful waterfall landscapes.

One of the tallest waterfalls in Iran is located in Lorestan province. To watch this unique waterfall 95 meters, you need to go 38 kilometers southeast of Khorramabad. This cascade of Iran is at the top of the mountain it herbal remedies there are many that some of the tourists visiting the falls, this herb also you will be gathered. 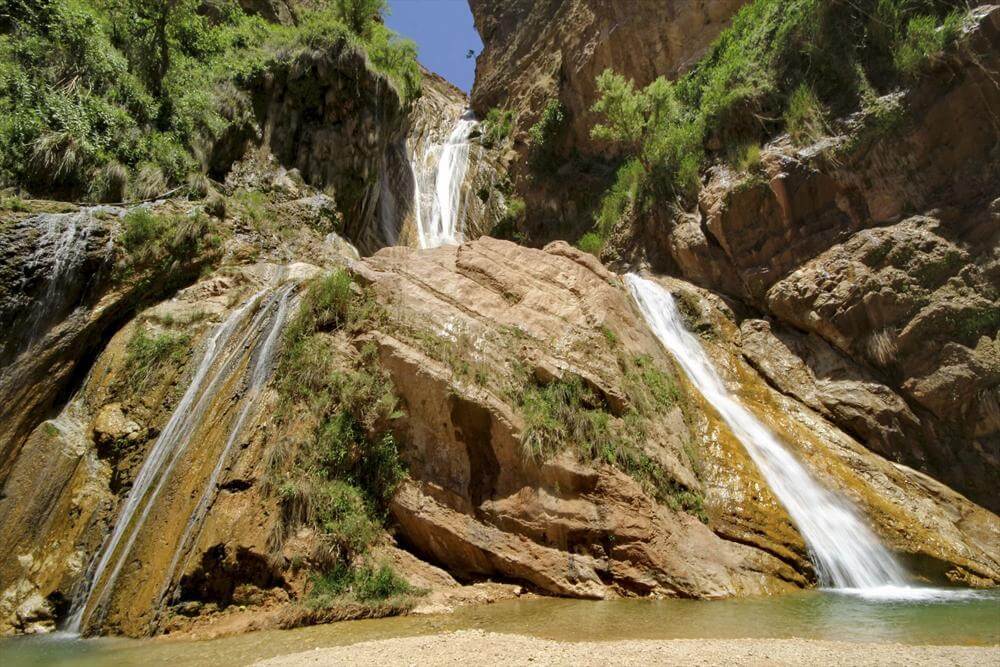 This waterfall is one of the most beautiful and eye-catching waterfalls in Iran and is located on the border of Fars and Kohgiluyeh and Boyer Ahmad province. Maybe get a surprise, but at the top of the mountain,  this waterfall has no river, but in the body of the Rocky Mountains.  more than a Thousand Springs,  there is water where the fountain is unsurpassed.  From this point of view, this waterfall is the largest and tallest waterfall in the world.
consequently, Margoon waterfall is located 130 km from Shiraz city near sepidan.

subsequently, Sepidan is on the border of Fars province. The Kohgiluyeh province and Boyer Ahmad, so for many people, the question arises that Margon Falls is one of which province of Iran is considered. Margoon waterfall is one of the most beautiful waterfalls in Iran, about 100 meters wide and 70 meters high.

certainly, The water from this waterfall and the river has caused the surrounding climate to be very diverse. The margoon waterfall River continues to sepidan and during its bed. In addition, it causes the surrounding trees and gardens to be watered.

There is no river on the top of the mountain where the margoon waterfall originates, and the waterfall water originates from the hull of the Rocky Mountain wall.  If you look at the image of the waterfall, you will see that from the mountains of Margon countless springs flow. consequently, That’s why Margo waterfall is the largest waterfall in the world. 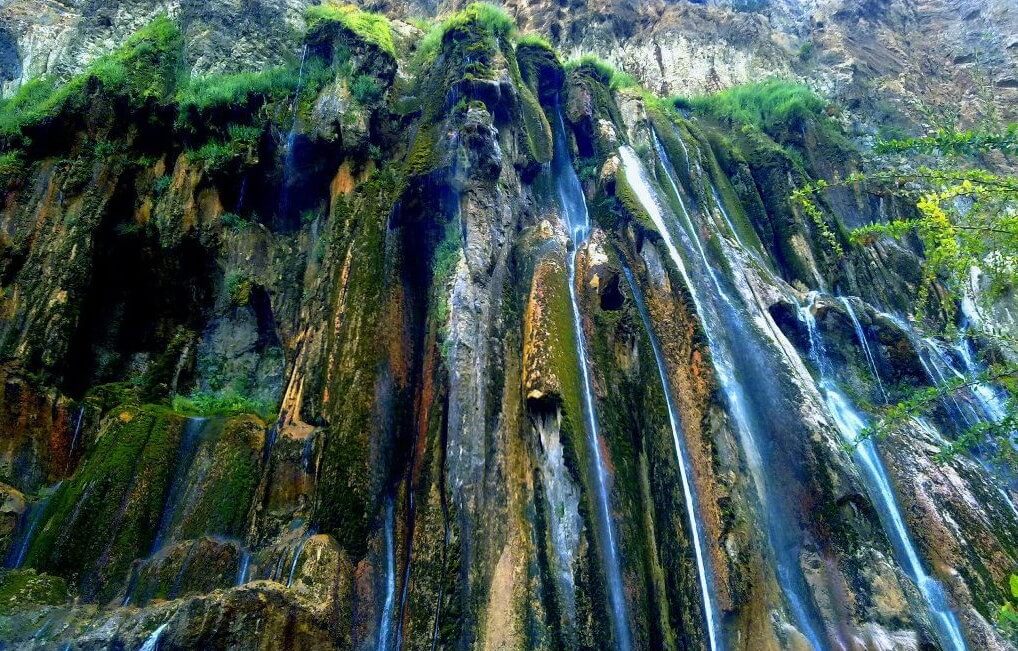 Meanwhile, Another beautiful waterfall in Iran is 4 km east of Semirom city and 160 km south of Isfahan. The waterfall is located in the depths of the Strait of the same name with stone walls. Semirom waterfall  known as the beautiful bride of the Zagros mountain dynasty. Moreover, its height is 35 meters and around it are considered places for rest and accommodation of tourists. The best times to visit these waterfalls are Spring, Spring and summer.

subsequently, Semirom waterfall can named as an unmatched natural masterpiece in the heart of the Zagros Mountains. therefore, a waterfall that is roaring and flowing from the mountain basalabt.  This extraordinary attraction is charming at a distance of 5 km east of Semirom. Also, Semirom waterfall has indescribable beauty and welcomes more than 150 thousand nature lovers during the spring and summer. During the seasons of nature, this waterfall for a dreamy and dazzling, the Beautiful where can be hours in the vicinity it enjoy and to admire the endless power of the Lord in creating such a masterpiece-living and pay.

The waterfall is located deep in a strait with stone walls and its water is flowing with indescribable roar. Combine the incredibly scenic waterfall. The mountain and the plants lush with space smooth.  It filled from the sound of the Roaring Water. For example,  the birds singing, the creator of the set, soul-catching, natural, magical, that being in it will definitely matter how small your stroking does.

out player water from the heart of the cliff, the hard mountains of the Zagros and the genesis of this waterfall for many years lasted.  However, water is soft and clear, this waterfall is thousands of years against the hardness of the rocks in now.  The fight finally managed on the autopsy make and out the way advance beyond.

Above all, This stunning attraction of the Zagros Mountains was 75 meters high in the past. But, unfortunately, due to continuous erosion in consecutive years, the altitude has fallen to 35 meters. It should noted that the waterfall in 1389  listed in the list of natural heritage of Iran.