Yazd is one of the famous city  for its Qanats (underground aqueducts) and this water museum is the best of its kind that is devoted to the brave men who built them. It is Located in a restored mansion with a visible Qanats  running underneath, the museum offers, through a series of photographs, exhibits and architectural drawings, a fascinating glimpse into the hidden world of waterways that have allowed life to flourish in the desert. 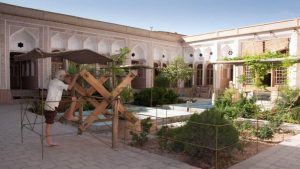 The arrangement of the items and objects of this little museum inside a 19th century house is fantastic. It tells you a lot about the importance of water in Iran and how it’s been historically supplied, reserved and managed. Qanat (Kariz) system is an ancient Persian system to bring water from far away to the middle of deserts to create and preserve life there. This is what Iranians have been doing for more than 2500 years and it’s gone to China in the East and Spain, Africa and even Mexico by the seamen later. 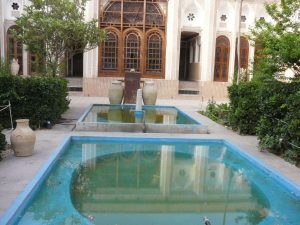 The uniform of the qanat builders shows an early form of Personal Protective Equipment (PPE), with padded cotton hats and white-coloured clothing that was both luminous in the dark and would act as a shroud in the event of a fatal accident.

The museum, which charts the 2000 years that Iran’s unique irrigation system has been in operation, describes the drilling of mother wells (which can reach a depth of 300m,such as the qanatnear Mashad) and the use of water distribution clocks. These clocks (basically a bowl with a hole in the bottom) helped to mark out the 15- or 20-minute shares of water purchasable by householder or farmer.

Qanats run through many of the wealthy old houses in Yazd, collecting in pools in basements known as sardob. As the coolest part of the house, these rooms were often beautifully decorated and several fine examples exist in Yazd’s old traditional hotels today. The qanats (there are many running through each town) are the reason why the wealthiest districts are always closest to the mountains – to be closest to the freshest water.