Tis Mosque the sights of Chabahar and memorabilia from the era of the advent of Islam.  In the historic village ‘ Tis that of a city important in Iran in centuries of early Islam were considered. Tis was one of the most important ports of Iran in the Makran sea in Achaemenid times.  And it referr to as sharp. During that time, goods from East Asia and India came to the port of TIs. And it sent to different regions of the Middle East, Middle Asia and the Caucasus. The village has a warm and dry climate and has many historical monuments in its place. The most spectacular areas of the city of Chabahar can be called the Tis Mosque, which is located in the village.

The initial building of the Jame Mosque Tis or tuba mosque dates back to Sadr Islam, dating back to 1250 years and is the second mosque after Islam in Iran. Jame Mosque in terms of architecture and interior decorations such as mosques of Pakistan and India. This mosque, like most Sunni mosques, has a minaret. It is why this old mosque. And, it is also known as a single minaret mosque. The minarets and domes of this mosque are painted with green and red colors.  Its doors are colorful with regular and irregular glass and give a spectacular view to the mosque.

Tis Mosque is different and very attractive. Colorful, eye-catching, and historically speaking, the residents of the region is attracted to every passenger himself. The mosque is a single minaret is related to Sunni laws and of the architecture BBW Indian enjoying not apparent that in other parts of the country to watch will vary. Coloring and painting inside and outside the mosque reminds you of the paintings and photos of India and Pakistan. Subsequently, of course, they decided to develop a mosque that broke up the harmony of the building. But from the eastern side of the building that developed, see and enjoy the rest of the angles of the mosque.

Year of construction of the Mosque

Jame Mosque of TIS memorabilia from the era of the Sadr of Islam in the historic village of Tis, which has been an important port of Iran in the early centuries of Islam. The initial building of the Jame Mosque Tis or tuba mosque dates back to Sadr Islam, dating back to 1250 years and is the second mosque after Islam in Iran. This mosque is in terms of architecture and interior decorations such as mosques of Pakistan and India.

After turning to Islam, Iranians built many mosques throughout our country. Architecture and coloring each was different from the other and each has hidden secrets in their hearts. Tis Mosque Chabahar or the tuba mosque is narrated by ear to ear; the second Mosque of Iran is after Islam and dates back to 1250 years ago. Its architectural style and coloring is very interesting and unique and a combination of Asian – Eastern arts can be seen in it.

Tis Mosque, which is architecturally similar to the mosques of Pakistan and India, like most Sunni mosques, has a minaret. The apron of this mosque reminds every pilgrim of paint and beautiful roles for the first time. Minarets and domes that are more beautiful in green and red colors and doors with regular glass and irregular colorful effects have been eye-catching to the mosque. Alongside all of these, white and Urdu speaking people who look friendly and affectionate pilgrims with a smile add to this charm. 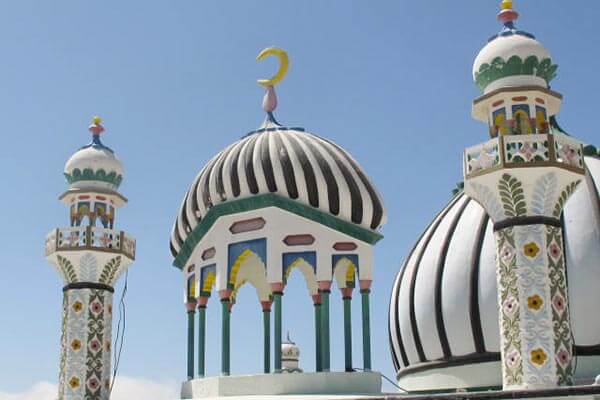 If you suspect that mosques and temples are visiting the Jame Mosque Tis Chabahar because of the spirit of praise and the spiritual state in which they flow. The places are relaxing and kind. Kindness has nothing to do with religion and religion, and it only flows in the spirit of all humans, and we are all part of one whole. To paraphrase Abu Saeed Abu al Khayr, a sweet-speaking poet who says:

Above all, our way is good anyway.

Plugged in in whatever direction they seek.

Gaze upon thee, and they see it not.

Your name is welcome in every language they say.

We have a special offer for you: scheduling trips that have a number of places to visit for us that these days do not have much time and cost needs experience and guidance.

Consequently, The Jame Mosque is surrounded by a wall that is distinguished from the outside completely inside. After the wall is located an entrance courtyard, which is fraught with the crowd at the time of religious ceremonies. The entrance to the mosque will lead you to the courtyard inside. When you enter the mosque, the beautiful architecture of the roof and the altar of prayer will fascinate your eyes.  Also, it is the difference between the mosque and other mosques occurs.

If they let you go up the roof, see the dome of the mosque reminds you of the city of chocolate.  And dome and ramparts candy throws and you will have a beautiful view of the sea and desert. Another attraction of this mosque is the pentagram Azan and prayer in five occasions, which is special Sunni.

Next to the mosque ‘Tis the sights a lot in Chabahar are waiting for you until they see you as: telegraph the British Chabahar, the mountains, Martian Chabahar” the village of TIS, etc. passing through Lipar Lake Chabahar ” Beach Seaside cotton tees mountain flower, inkjet, and, of course, near the village caves ban masiti should be too close. A journey full of spectacular views for you on a trip to Chabahar.

Above all, If you have any question please send us a message