The Persian Qanat or Qanats, are 3,000-year-old marvels of engineering in deserts, many of which are still in use throughout Iran. Beginning in the Iron Age, surveyors—having found an elevated source of water, usually at the head of a former river valley or even in a cave lake—would cut long, sloping tunnels from the water source to where it was needed.

The orderly holes still visible above ground are air shafts, bored to release dust and provide oxygen to the workers who dug the Qanats by hand, sometimes as far as forty miles. The tunnels eventually open at ground level to form vivid oases.

Constructing Qanats was a painstaking task, made even more so by the need for great precision. The angle of the tunnel’s slope had to be steep enough to allow the water to flow freely without stagnating—but too steep and the water would flow with enough force to speed erosion and collapse the tunnel.

Although difficult work—even after completion, Qanats require yearly maintenance—the irrigation tunnels allowed agriculture to bloom in the arid desert. The technology spread, through Silk Road trade and Muslim conquest, and Qanats can be found as far as Morocco and Spain. 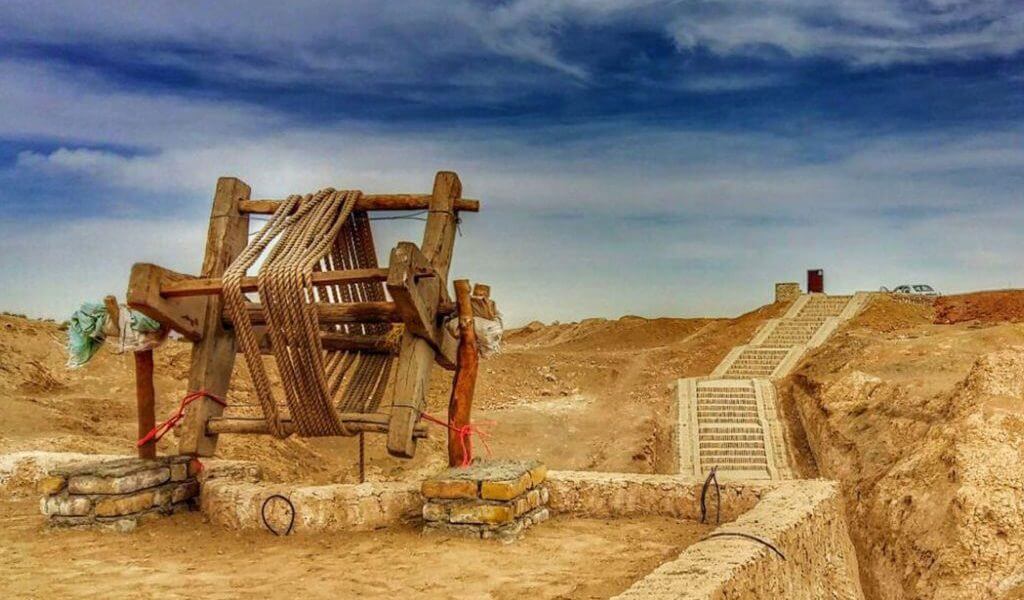 “A traveler flying over Iran can see plainly that the country has an arid climate. The Iranian plateau is largely deserted. Most of Iran (excepting areas in the northwestern provinces and along the southern shores of the Caspian Sea) receives only 6 to 10 inches of rainfall a year. Other regions of the world with so little rainfall (for example the dry heart of Australia) are barren of attempts at agriculture.

Yet Iran is a farming country that not only grows its own food but also manages to produce crops for export, such as cotton, dried fruits, oil seeds and so on. It has achieved this remarkable accomplishment by developing ingenious system for tapping underground water.

The system, called Qanat (from a Semitic word meaning “to dig”) was invented in Iran thousands of years ago, and it is so simple and effective that it was adopted in many other arid regions of the Middle East and around the Mediterranean” (Wulff-Dieter Heintz).

The origin of the word qanat is still controversial. Some believe that it has a Persian origin and changed into the present pronunciation. According to this theory the word qanat derives from the Persian word Kene, which means digging. However, some believe that this word is originally Arabic, from which the English word canal has derived. Throughout the world there are over 27 names for this traditional technique. For example, the names used in southwest Asia are: Quanat, Can ant, Connought, Kanat, Khanate, Khad, Kanayet, Ghannat, Karez, Kariz, Kahriz, Kahrez, Karaz, Kakoriz, and Falaj.

Besides the Qanats providing necessary drinking water, it also helps cooling down indoor temperatures. In Yazd, an Iranian city where summers can be extremely hot, the Qanat is very important. The combination of a Qanat and an Iranian wind catcher (Badgir), creates a cooling effect. The warm incoming air comes through the shaft and transforms into cool air by the Qanat’s cold water. This ancient method of air conditioning is still widely used, especially in hot cities like Yazd.

The Qanat, in combination with another ancient Persian structure called ‘Yakhchal’ – which literally means ‘ice pit’ – creates a brilliant evaporation cooler, even in the hottest areas of Iran. The Yakhchal has the shape of a dome, placed above the ground with an underground storage space. In these Yakhchals, the ice by Itself mostly created during the cold seasons or sometimes ice brought from the mountains to seed the icing process.

This icing process works as followed; the water that is flowing from the Qanat to the Yakhchal rests inside of the structure and starts to freeze. This clever way of cooling dates back thousands of years. Furthermore, not only the Qanats but also the Yakhchals are still in use in many places throughout Iran.

The Qanats were also a great way to maintain beautiful oasis-like Persian gardens. These gardens filled with flowers, trees, water fountains and waterways. All of them are fully arranged in harmony and symmetry to reflect the Zoroastrian adoration of nature and its elements. 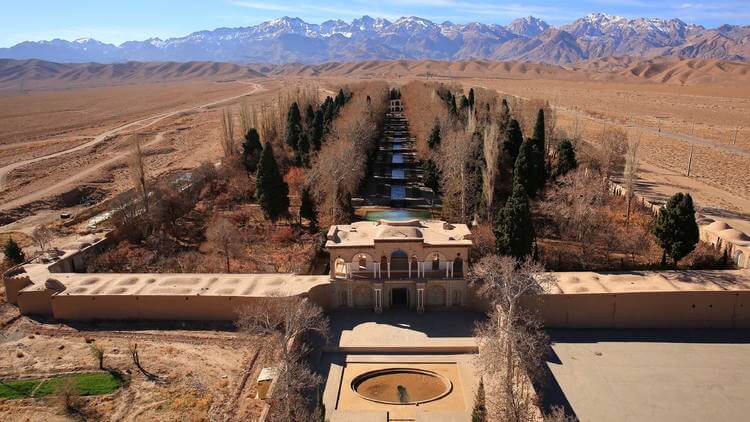 What is The Persian Qanat and how does it work?

All these names refer to a horizontal tunnel, which drains groundwater, usually in alluvial fans. The mechanism of this structure is the same around the globe; a horizontal tunnel with a gentle slope that partly cuts through the aquifer. Water in saturated layers seeps into the tunnel, accumulates and flows down the tunnel.

It is very typical for deserts to have a landscape of many craters in a row. The craters, which can be easily seen from air, are actually the mouths of a Qanat’s shaft wells running across a desert.

These wells are vital for Qanats as they act as means of ventilation as well as a way through which debris and excavated materials can be hauled onto the surface International Center on Qanats and Historical Hydraulic Structures in Iran there are Qanats with lengths over 10 km, sometimes cutting through a very hard formation.

This is why in some rural areas; locals attribute the creation and construction of Qanats to supernatural powers or creatures such as genies. But the fact is that normal people of years ago invented these long Qanats, and extended by their offspring during periods of

drought as far as the aquifer would allow in order to keep the Qanat discharge steady. Moreover, a Qanat became longer and longer through years where the pick axe handed down from father to son.

This process resulted not only in the physical development of Qanats, but also in the accumulation of knowledge and the buildup of a distinct civilization- Qanat civilization, which is rooted in the technical characteristics of the Qanat. In general, Qanats are examples of how deeply culture, environment and technology are interwoven. They cut through history, and bring not only water to quench the thirst of lands, but also this priceless message: Earth is our kind mother as long as we are grateful sons.

Qanat is a gently sloping subterranean canal, which taps a water-bearing zone at a higher elevation than cultivated lands. In 2014 there have existed some 37000 active Qanats running all over Iran, discharging about 7 billion m3 groundwater a year. A qanat consist of a series of vertical shafts in sloping ground, interconnected at the bottom by a tunnel with a gradient flatter than that of the ground.

The first shaft (mother well) sunk, usually into an alluvial fan, to a level below the groundwater table. Shafts sunk at intervals of 20 to 200 m in a line between the groundwater recharge zone and the irrigated land. From the air, a qanat system looks like a line of anthills leading from the foothills across the desert to the greenery of an irrigated settlement.

Qanat engages a variety of knowledge and its studying entails an interdisciplinary approach. A socioeconomic system that guarantees their sustainability in a traditional realm, embraced The Qanat. The facets of this socioeconomic system operate closely together and make it possible for the Qanats to remain into future. 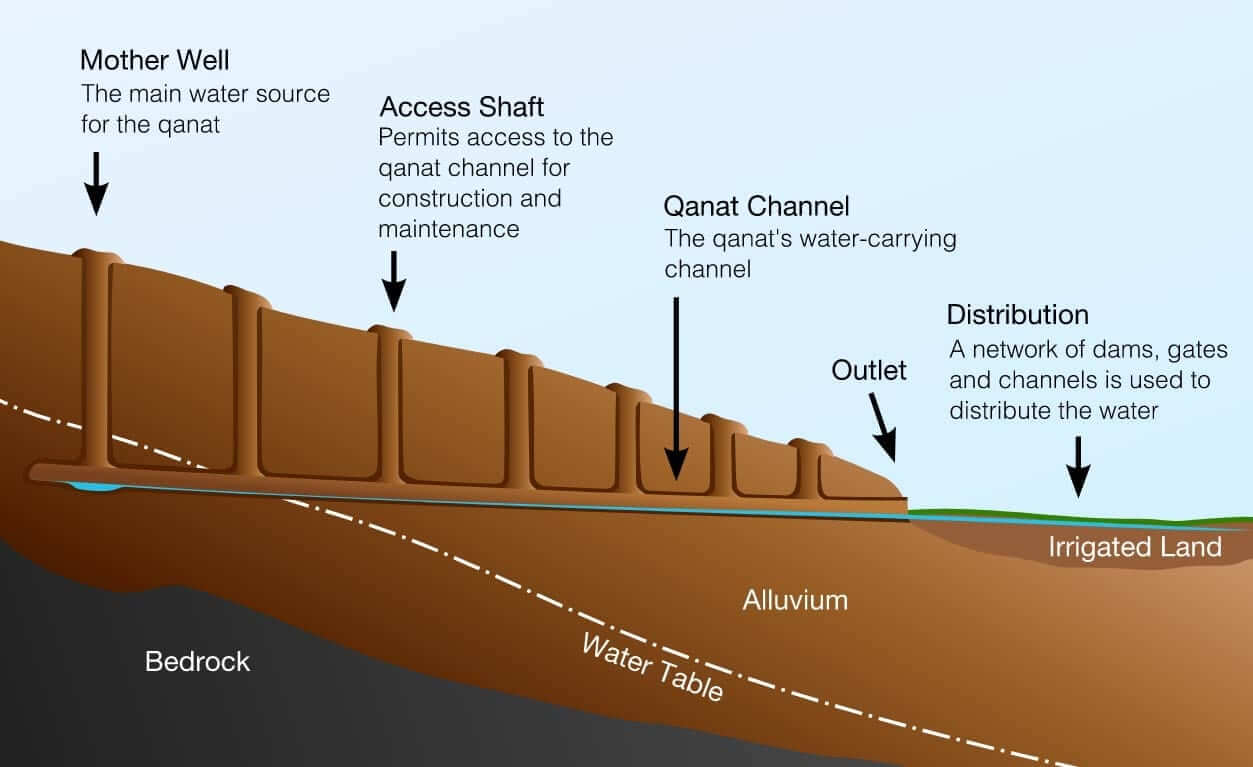 Tunneling into a cliff, scarp or base of a mountainous area, following a water-bearing formation constructed Qanat.

On the Iranian plateau, an important heartland of qanat- watered settlement, this change in water technology is draining aquifers, altering the distribution of towns and villages, and transforming the life worlds of Iranian villagers. It is a sustainable technique to tap groundwater without inflicting any damage on the aquifer.

Qanat system carries some advantages as follows. Its system works only with the force of gravity and does not consume any kind of fuel unlike pumped wells. Qanat system just drains out the overflow of groundwater and does not throw the aquifer inflow-outflow off balance.

Digging a Qanat depends on the climatic, hydro-geological and topographical condition of the region. Qanats dug at areas with temporary surface water resources, a land slope of up to 0.5 in 1000 and permanent underground waters. The length of a Qanat which also affects its water outputs different in various natural conditions.

These circumstances depend on the land gradient and the depth of the mother well. On the other hand, a lower level of underground water means a deeper mother well. The most important factor specifying Qanat length is land gradient. Here the former factor has an inverse proportion to the latter.

Wulff, H. E. (1966). The traditional crafts of Persia: Their development, technology and influence on Eastern and Western civilizations.