One of the most attractive tourist attractions in any destination is the discussion of the food that exists in that city or country. In recent years, the issue of street food has become very important. Also, in every country, there are areas where several food vendors are located together. Also, each of them offers a world of delicious and hearty food for themselves at reasonable prices. Familiarity with the most delicious Iranian food can have many attractions for people. If you are familiar with Iranian food, you must know that Iranian street food has a delicious taste. Also, in almost all cities you can taste these delicious dishes. In this article, we want to introduce you to the most delicious street food in Iran. So join us in the article of the most famous street food in Iran.

The main philosophy of creating street food is to offer popular food and snacks at cheap prices. In the past, food was sold on old stalls and wheels to suit any season. Most of these foods were more like home-cooked foods than high-calorie fast foods. In fact, contrary to popular belief in street food, in old Tehran the seller tried to prepare the best food of the season and sell it at a lower price. These foods were mostly eaten by travelers or people traveling around the city. Also, their taste was close to home cooking. It is interesting to know that due to the reputation of a seller, people were willing to travel long distances to buy only from him. So, what we think of street food today is largely due to Western fast food culture combined with Eastern street food, which was rarely hygienic or had nutritional value.

Note that most of the street food in Iran is the same in different cities. However, in some cities, depending on the season and local food, a new option may be added to the menu.

One of the most delicious and nutritious street foods in winter is baked potatoes and eggs. This combination was served with salt, pepper, spicy spices, sometimes tomatoes, butter and cucumber. For a certain amount, the seller delivered eggs and potatoes inside the local bread (Lavash, Sangag, Barbari, etc.) to the customer. For spices, the customer can choose whether he likes to use butter or spices or not. Vendors keep eggs and potatoes separate in large copper pots. They also go to busy city centers such as cinemas, parks and transportation terminals to make money selling food. 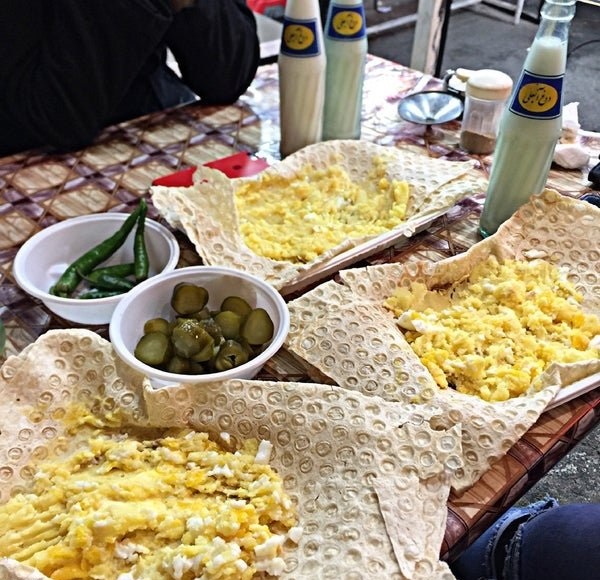 Baked beans (Baghali Garmak), one of the most famous street foods in Iran

Another snack or in other words healthy snacks of the Iranian people is cooked beans. Hot beans are served in special containers. Then, special spices such as red pepper and thyme are used on it. The peak of bean sales is in the winter, when people are looking for a hot and tasty food.  Of course, we see that in most cities of Iran, as well as in the busiest centers, bean sales continue to operate with their carts. 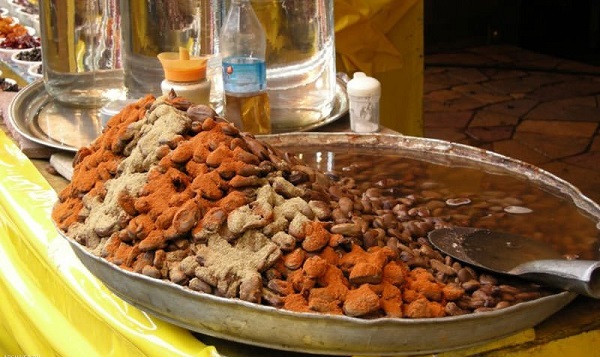 As you know, beets and turnips are very suitable for treating diseases and colds in the cold season. In many cities of Iran, as soon as the weather cools down, beet sellers or turnip sellers take to the streets in their own carts. The beetroot cart is kept warm under charcoal or heating so that the beets do not cool down and cook slowly. 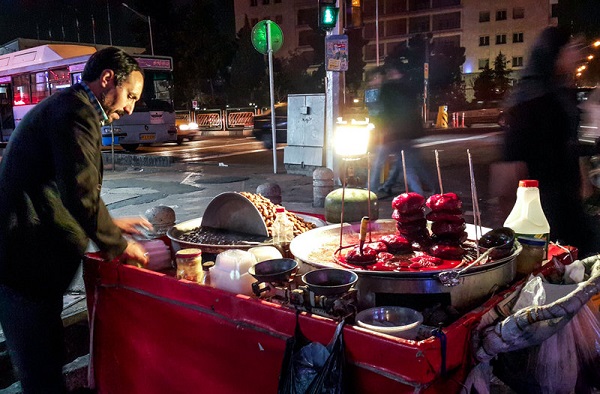 Experts believe that samosas first went to India from Iran and then re-entered the Iranian food culture. Samosas have many fans and are prepared differently in each city of Iran. Some people use fish, meat or poultry to make samosas. Others flavored vegetables and used them as ingredients in samosas. Contrary to its Russian name, Vavishka was one of the traditional Iranian dishes that was also cooked in Russia. Note that samosas and Vavishka were more expensive than other street foods. 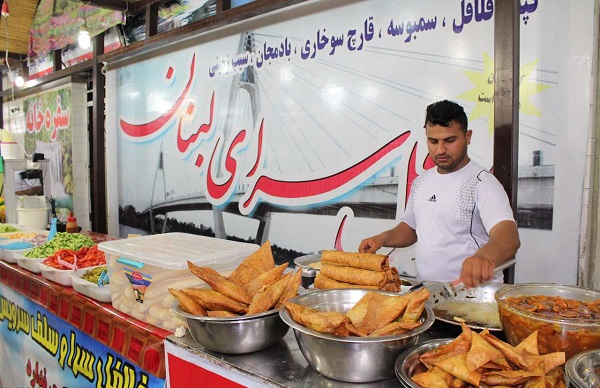 Falafel, one of the most famous street foods in Iran

Falafel as a delicious, simple and light food that is offered to the customer at a more reasonable price than other foods. The most famous falafels belong to Khuzestan province, Ahvaz city. In Ahvaz, the business of selling falafel in different neighborhoods has grown so much and has been welcomed by the people of Ahvaz, travelers, students and others. This has caused a lot of crowds and traffic in this area. The charm of falafel is separate from its taste due to the side dishes. Falafels in the city, which is generally in the form of self-service. With all kinds of salads and pickles in front of their shops and stalls. A cheap food with high nutritional value. Falafel as one of the most popular foods in Arab and Eastern countries, especially one of the most famous street food in Iran. 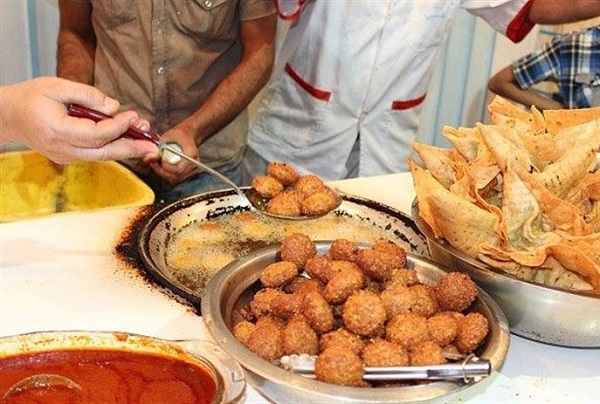 Grilled liver and other kebabs

Liver food is another popular street food of Iranians, which was considered as a luxury and nutritious street food. The sale of this food was mostly done in recreational areas or some famous areas. Liver Sellers skewered some of the liver and grilled it. Also, very tasty kebabs are cooked. You will see plenty of stallholders and mobile food shops making kebabs, grilled chicken and grilled liver. Even go for 12 nights, kebab is on the way in this area. 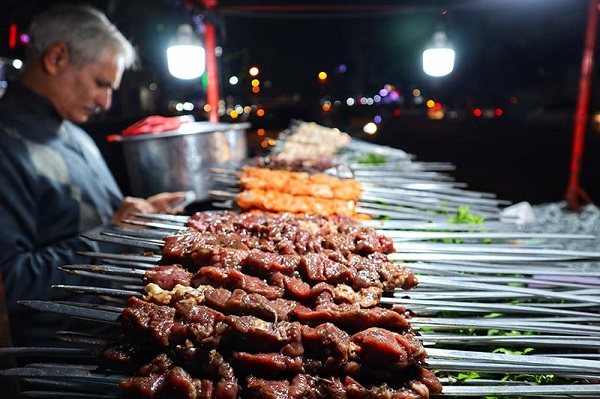 Grilled liver and other kebabs

Undoubtedly, different types of Ash, especially Ash Reshte, are popular among Iranians. In every city of Iran, different types of Ash are prepared with different ingredients. Also, each of them has its own pleasant greed. In the past, during the cold season, many vendors prepared homemade dishes and carried them in large pots. These pots were in such a way that the soup would not cool down. The seller poured curd, hot garlic, hot onion and hot mint into separate bowls next to the bowls. Then, the customer would add each of the greedy to the soup according to his taste. 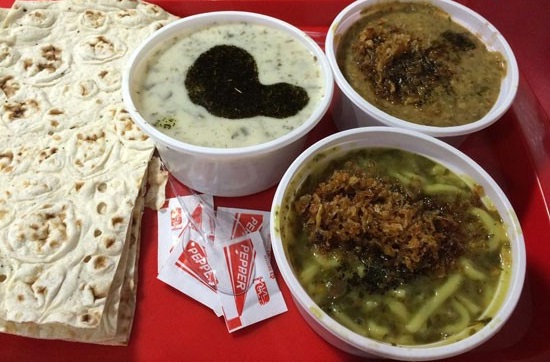