Tabiat Bridge known as one of the symbols of the capital, which connects Taleghani Park to the Water and Fire Park and has constructed on Modarres Highway in Tehran. Also, the bridge located in Tehran tour program for most domestic and foreign tourists. Also, visiting this beautiful and modern bridge and using recreational spaces on both side of the bridge is enjoyable for any tourist.

In addition, walking on this bridge can see the beautiful landscape of Tehran and will have the best opportunity for photography and selfies. So, stay tuned to learn more about the idea of building a bridge to designing it. 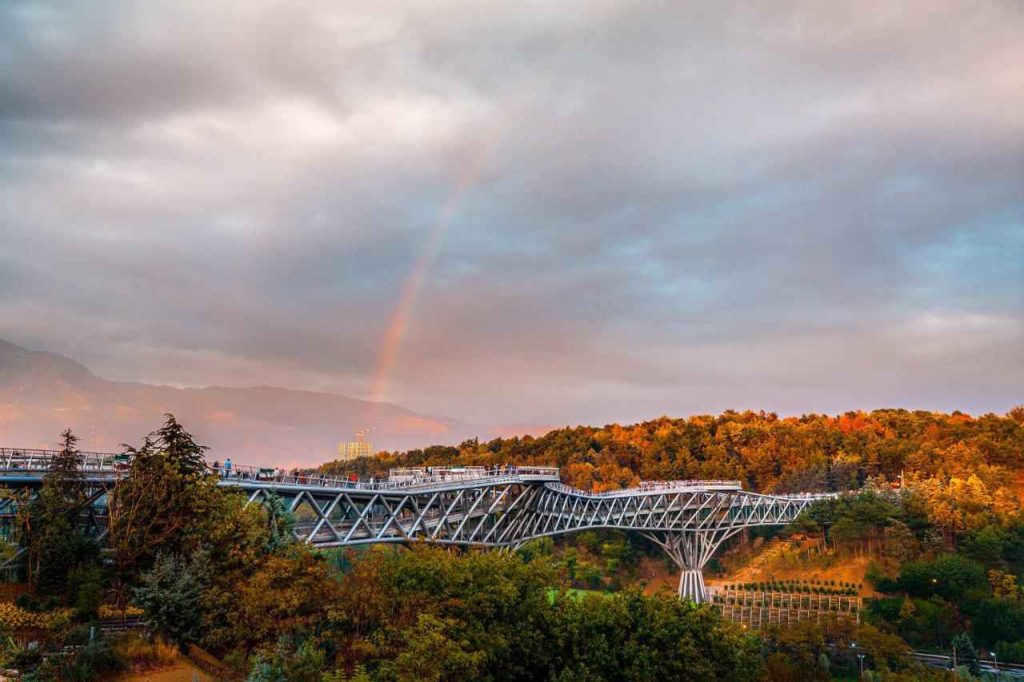 Tabiat Bridge offers you a unique view of the Iranian capital, while thanks to the space and facilities such as cafes and restaurants. Besides, you can spend hours on the bridge and record these moments forever by taking photography.

Also, Tabiat Bridge is the largest non-vehicle bridge in the Middle East and Iran’s first impersonal bridge. Besides, with its unique structure, the bridge has won numerous international awards, such as the 2016 Aga Khan Architecture Award, and has fallen over languages over and over again.

In addition, when you stand on this bridge, the shah of Tehran’s main roads, Modarres Highway, Hemmat and Haqqani, is under your feet. In addition, you can see the beautiful views of Taleghani Park, the ports park lighthouse, the flag tower, the fire towers in the water and fire park and the Mina Dome. Besides, a little bit to raise your head and look at the horizon, you will see the southern slopes of Alborz mountain range and Damavand Mountain.

Tabiat Bridge is a structure with organic design and similar to its tree is completely environmentally friendly. Also, the tree shape of the columns somehow continues the continuity of the two green spaces by this bridge. Besides, Leila Eraghian, nature bridge designer, says about nature bridge concept:

Tehran’s Tabiat Bridge inspired by thirty-three bridges in Isfahan (which is a kind of Isfahan Tabiat bridge), a place whose name indicates 33 arches on the structure of that bridge. Besides, the sense it gives visitors is not dissimilar to visiting the Khaju Bridge.

Where is Tehran’s Nature Bridge?

Tabiat Bridge, which is one of Tehran’s landmarks, has constructed on Modarres Highway and connects Taleghani Park to the Water and Fire Park. Besides, its convenient location makes it possible to access it by metro, bus, private car or taxi.

To go to Tabiat bridge by metro, you can get off the train at Shahid Haghani station located on line one of the metro. So, after leaving the station, go to Taleghani Park and get to the nature bridge from its beautiful wooden footpath.

Also, if you want to go to the Tabiat bridge from Taleghani Park, you can use the great Path of Shahid Haghani. So, after crossing the crossroads of Jahan-e-Child and The Great Bridge, go to the side street of Taleghani Park and park your car in its large parking lot.

In addition, to access the Tabiat Bridge from the Water and Fire Park, head north on Jordan Street (Nelson Mandela). Also, then enter Shahidi Street on the Haqqani Highway east, and after the car park, move from the entrance to the water and fire park on this street to the Nature Bridge. Besides, it is noteworthy that there are two car parking spaces on Shahidi Street for public use.

First floor: On the first floor of nature bridge, there are spaces for bridging so that you can enjoy the delicious taste of Iranian and foreign cuisine in the lush greenery and spectacular view of this region. Besides, Tabiat Bridge food court located on the eastern side of the bridge and includes several coffee shops, Iranian restaurants and fast food that have a capacity of about 300 people. Also, the area of this floor is about 1450 square meters and its walls covered with glass.

In addition, second floor: This floor, which covers an area of about 2,870 square meters, has a cozy atmosphere. Besides, thanks to the benches placed in different parts of it. Also, you can get some fatigue and take advantage of the tranquility and all this beauty.

Moreover, third floor: If you go to the third floor of the Tabiat Bridge, which covers 571 square meters, the wonderful landscape of Tehran, especially at sunset, will give you intelligence. Besides, this floor is the best bridge for walking and walking. Also, especially as there are two watching platforms in the northern and southern part of it where you can both watch the surrounding scenery and take first-class photos.

Reasons for the Design of Tabiat bridge