Tabatabaei house, Kashan is known for art, culture and religion. A religious and culturally friendly people who have built their buildings and arts for the whole world. Indexes of the strength and health of the soul can be found in all the remains of the ancient peoples of Kashan. The fragrant smell of the soil and the beauty of the old houses of Kashan, freshness, garden, historical, Finn and historic market big time.

Arkani inseparable from the architecture of the sublime City and the cultural, Kashan, that upon the passageway convoys passing through the Silk Road has been. Hundreds of monuments and shrines are among the attractions that bring everyone to Kashan.

Among the works related to the architecture of the Old City, what all tourists towards their talks, etc. the Houses of the ancient, it is because the houses minor from the flow of everyday life of all peoples and sightings of the old houses, which is a symbol of relaxation and a place to live is, it can be for all the interesting and attractive.

The Tabatabai house, like other monuments of that time, has the originality of architecture and design tailored to the specific culture and climate of the region and luxurious decorations. As you step into the vessel of this magnificent house, the cool and airy breeze will caress your face and bring you into the House. From the staircase in front of you 20 stairs that go down. You will reach the beautiful and spacious courtyard of the House.

A courtyard whose stunning beauty nails you for a moment. The beautiful and large pond is drawn from one side to the other. And the goldfish follow each other inside the clear water. 2 to the large pond, 6 octagonal gardens full of beautiful flowers, the yard’s freshness a hundred.

This house is near a number of other sights, Kashan, including the historic house and further, near the Tomb of the breakaway imamzadeh Sultan Amir Ahmad (this monument is also from the works of Henry the ninth century and the tenth) is located, and because the cornerstone of this personal name “Haj Seyyed Jafar Tabatabaei Natanzi” established, to the House of the properties, known and has long been famous. 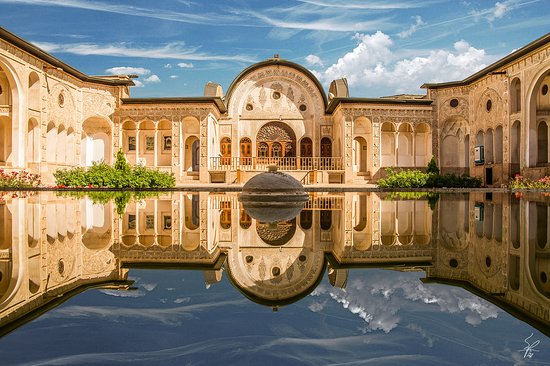 Thus erected both in terms of strength and deal with the earthquake-resistant. It seals in moisture to the building will facilitate the … in addition, the moisture, according to the development of plants used. When the building is in the heart of the soil (i.e. the garden pit is built) the house is also in thermal insulation. The house is neither warmed nor cooled.

The courtyard of the Northwest Side is larger and the number of rooms and has a separate reception hall. In the following part of events, especially the room, Central Time. Cellar a large, which has a profile identifier is a number of factors such as the existence of Windward, etc.

However, The ceiling multiplicative, the type of materials used in the hull, etc., double glazed, being, body, etc. There pools previously in the center of the cellar. And height difference with the level of the alley, about 8 up 10 km and the breeze of coolness that the surface of the pond, central courtyard, enter the following earth will be, etc.

has led, especially in the summer season 15 up 20 the air temperature difference between the basement and out of it.

The exterior of the house includes a large hall (king room) in the center with skylights and colored grille windows and double-glazed side windows that open and close vertically. The room has interesting painting and mirror decorations and plasterwork, including gypsum grille windows that look like elegant lace fabric. On both sides of the King’s room are the earring rooms.

In front of the King’s room, a porch with mirrors and interesting plasterwork can be seen. On the sides of the Great Hall, two backyards and skylights have been constructed as symmetrical. It have exquisite painting boards and are among the exquisite artwork of this land.

And the close friendship order, family, have, etc., therefore, to respect the friendship that the deceased Tabatabai have, in the implementation of Gachboriha and drawing paintings, this home monitor is and the more value and credibility decorations home Tabatabai will highly increase.

The crew House courtyard, which includes crew rooms, crew basements, kitchens and winter and summer stalls, unfortunately, a number of crew rooms have been lost.

The water of the house was provided by two strands of Dolatabadi and Nasrabadi aqueducts. Tabatabai House has 5 entrance doors, the main entrance divided into two entrances inner and Outer in the vestibular. The cause of the maze of the entrance corridors is to break the difference in height and lack of direct visibility.

Mention this point didn’t he build the Houses of the ancient words, yet that region and lay the water and air as the normative and scientific attention to, in terms of adherence to the beliefs, religious and Islamic of some sort, hijab, and design copyright is also important. It means that the interior of the house from the outside, the house is not visible. And even from the roof of the houses nearby also inside the house. And from each section, within the part seen by the other is not.
Above all, in addition to all the interiors of the house to the outside of the full hijab enjoys. Each part of the house to each other of the hijab and certain wear. The Tabatabai house, like other luxurious houses of that time, built in the bezel of the Earth.

That is, to reach the level of the courtyard of the House must be down from the entrance stairs to a depth of 6 meters. And that is where the beautiful landscape inside the House of man to animate. As we know, at a depth of one meter above the Earth’s surface.

Because of this depth and goodness, the water of the Wells is always cool and pleasant. And at the same time in summer and winter, the temperature is steady. Accordingly, the wall facing each room cooled back to the ground. And the surface temperature of this wall in all seasons of the year can not be more than 18 degrees Celsius.

The same causes the absorption of room heat in early summer and provide relative comfort of residents. But at the peak of the summer heat the basement (cellar)connected to wind-catchers meet the needs of the inhabitants of the house in terms of ventilation and wind-conditioning, air cooling, respectively.

Above all, Other important advantages of building a house in the bezel, in addition to cool, and moderating temperature. Also, It used to easier access to the aqueduct. And its juice as well as the strength of the building against earthquake mentioned. The Tabatabai historical house built about 175 years ago.