Baby eels are one of the most expensive Spanish Food, but when you see them for the first time you might wonder why.

They’re not, to put it mildly, something that cries out to be eaten. When alive, they’re transparent and slimy, slithering and squirming like tiny snakes. Cooked, they turn opaque and resemble limp, dead worms, except they’re white with two tiny black dots for eyes. Hungry yet?
But lots of delicious things are not particularly good looking; what’s important is the taste. Here’s where it gets strange. It’s not that angulas, as they’re called in Spain, taste good or bad. They don’t taste of much at all – which is strange because they’re astronomically expensive, up to 1,000 euros a kilo. Even stranger still, legend has it they were once so unappreciated they were used as fodder for chickens and pigs. But then again, when it comes to eels, everything is strange. 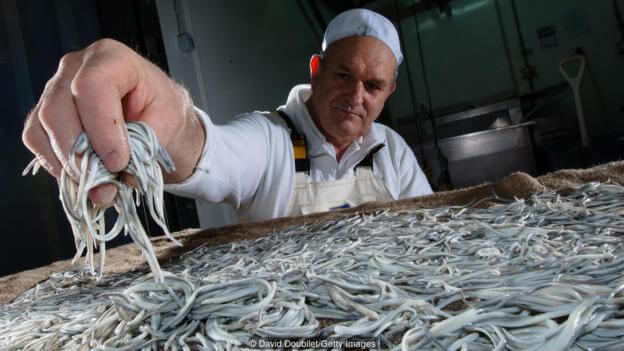 Many Spaniards find it difficult to understand why some people are willing to pay so much for angulas, including me. As a writer and podcaster about Spanish food and culture, I’ve always found it mystifying. Especially because the traditional recipe (a la bilbaína) calls for frying garlic and hot peppers in lots of olive oil and then adding angulas – a sure way to overpower their mild flavour.

Of course, mystery surrounds eels, not least when it comes to their life cycle, which sounds like something out of a dark fairy tale. They live in freshwater, but can breathe through their skin and travel over land for long distances. They eat just about anything, living or dead. Then at the age of 10 or so, they swim downstream in rivers across Europe to the Atlantic Ocean and somehow (it’s still unknown to science) they find their way to the Sargasso Sea, some 5,000km away. At depths of more than 500m – quite a feat for a creature that lives most of its life in shallow freshwater – they spawn and die, and their hatchlings drift on the Gulf Stream currents towards Europe, a journey that takes at least two years.

Angulas and the Spanish Food

When the angulas finally arrive on Spain’s Atlantic shores, fisherman with scoop nets are waiting for them. The season starts in November, and the best time to catch them is in the middle of the coldest, blackest, rainiest nights when the tide is strong and the water is rough and turbid. Of course.

While angulas are incredibly pricey, the first batch to go on auction every year are more expensive still. In 2016, the first lot up for sale weighed 1.25 kilos and sold for an eye-watering 5,500 euros. Wholesale. And yet the second lot, which weighed about the same, sold for a ‘mere’ 1,070 euros.

So why the difference? Same baby eels, bought minutes apart, just one batch before the other. Even more curious is that both lots were bought by the same man.

I tracked down the buyer, José Gonzalo Hevia, who owned Casa Tista restaurant in Asturias, to ask him.

“It was a bit of marketing for my restaurant and also an homage to the fisherman,” said Gonzalo Hevia, now retired. He was once an angula fisherman himself. “The atmosphere at the auction is very exciting. It’s a big media event. The next day, the name of my restaurant was in every newspaper and on every TV station.” 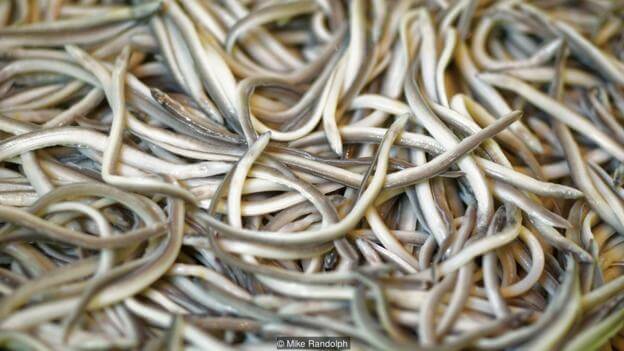 That kind of publicity can bring in a lot of customers. “Some of my clients came back 20 or 30 times a season to eat angulas,” Gonzalo Hevia added. When I asked him what’s so special about them, he said, “It’s the texture more than anything.”

But the texture doesn’t seem so special to me. I remember them as slippery, with a very slight crunch. Still wondering why people would pay so much for them, I visited Arima, a noted Basque restaurant in Madrid, and spoke to the head chef, Rodrigo García Fonseca.

García Fonseca, who served 3kg of them in one week this past January, also a la bilbaína, said, “I wouldn’t pay that money for them. They have no taste, no colour, nothing, not even smell. A lettuce has more aroma. But I had two guys in here that ordered half a kilo of them. Five hundred euros in one shot. Some people who have money like to spend it. Who doesn’t like being a snob from time to time?”

Spanish Food in the traditional menus of Christmas Eve

Nagore Irazuegi, the owner of Arima, is also from the Basque Country, where angulas are ingrained in the traditional menus of Christmas Eve, New Years and the Day of San Sebastian on 20 January. “They’re way overpriced, but some people like the ostentation of it,” she said. But she is quick to add that there is more to it. “On special feast days, it’s just a tradition to eat them. And that ties a certain class of people together. It’s a cultural thing. More than anything, people want to belong.”

Whether or not baby eels were once fed to livestock (everyone I spoke to had heard the same story, but little evidence exists), there’s no doubt they were once the spanish food of the working class in northern Spain. But that was back when angulas were plentiful, and therefore cheap. As angulas became scarce and prices rose, a company called Angulas Aguinaga saw an opportunity. In 1991, using surimi, a paste of processed fish, they created imitation angulas, which are called simply gulas. They look almost the same, but that’s about it. Gulas are softer and taste vaguely fishy. And yet they’re so popular you can find them in just about any grocery shop in Spain.

Part of the reason angulas are so expensive is that dams and environmental degradation have taken a toll on eel numbers, and they are now listed as critically endangered. Overfishing has also played a part. In the past, live angulas were exported to China, where they were fattened and sold as mature eels, but that has been banned since 2010. Still, a lively black market persists. In 2017, Spanish police uncovered an international angula-trafficking operation that, when busted, had a stash of gold ingots, 1m euros in cash, plus 2m euros worth of live angulas headed for China.

Three-star Michelin chefs have also played a role in the price increase. Manolo González, an award-winning food writer and historian from San Sebastian and secretary of one of the city’s famed gastronomic clubs, Cofradía del Ajo y el Perejil (The Brotherhood of the Garlic and Parsley), explains. “When I was young, in the 1950s and 60s, we ate a lot of angulas. At that time, they were still considered too low class for a restaurant to serve, but in the ‘70s, the great Basque restaurants like Arzak started to cook with them, and all of a sudden, angulas were high class.” 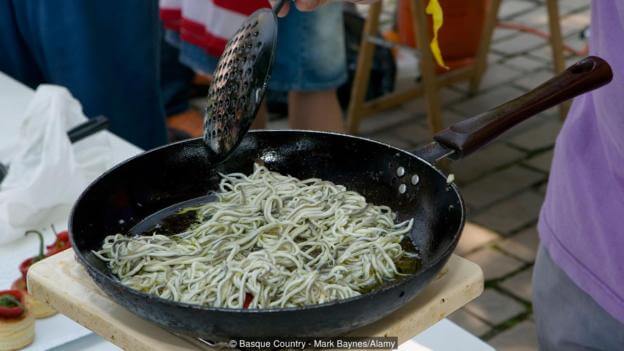 Now they were not only scarce, they were also fashionable. It was a perfect storm of demand. Prices skyrocketed.

“Exclusivity has always played a role in gastronomy,” González explained. He likens it to buying wines that cost 5,000 euros a bottle, way beyond their true value, but worth it to some even if only to show status. While admitting that angulas don’t taste of much, González does enjoy the texture. “And for a spanish food lover, on a special occasion, 80 euros for an appetizer isn’t completely out of reach.”
While he himself doesn’t cook with them anymore because of the high price, the taste of the classic angula recipe with oil, garlic and hot peppers still holds fond memories.

“You can make the same dish but with using spaghetti. We call it Poor Man’s Angulas,” he said with a touch of irony. “Try it, you’ll see how delicious it is!”