In addition, the Zoroastrian grave of Yazd known as the Silent Tower and The Tower of Silence. Also, it located in Yazd city in an area called Safaiyeh. Besides, it’s on a low-lying mountain called Crypt Mountain, which is one of the works that many people visit. 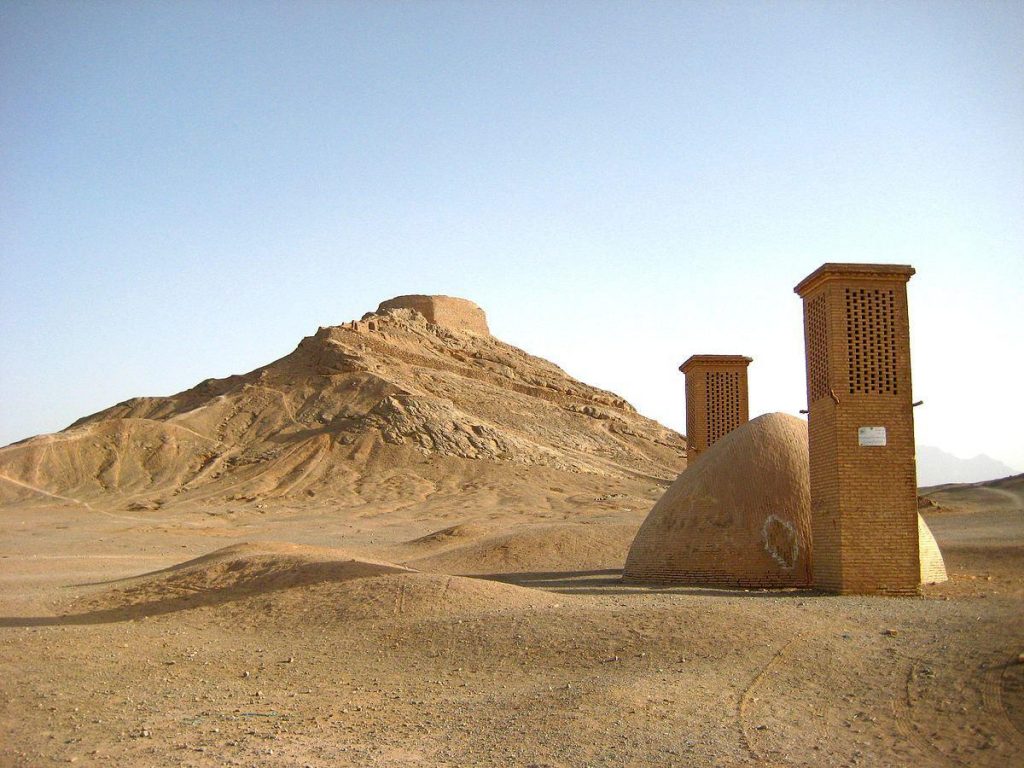 Silence Tower located 15 kilometers southeast of Yazd and near safaiyeh area, on a sedimentary and low-lying mountain called Crypt Mountain. Besides, a circular tower-like stone mansion with a mid-empty space known as the Zoroastrian crypt.

In addition, there are several clay and mud mansions, bricks, stone or a combination of these that belong to the Safavid era. Besides, they are among the welfare structures of this era, known as khileh. Furthermore, in 2002, The Silence Tower registered by the Cultural Heritage and Tourism Organization in the National Monuments List of Iran.

In this cemetery, according to Zoroastrian customs, the bodies of the dead placed in it to feed the vultures. Also, inside this pit-shaped cemetery is a hole dumped in the well after the vultures ate the bodies. Besides, at times around half a century ago, these customs were forbidden to shed the dead in a place like the crypt.

So, now the Zoroastrians are burying their bodies next to this crypt that used to be the feed of vultures. Furthermore, around the Zoroastrian cemetery in Yazd, there is a thick, tower-shaped wall that is very solid and durable, leading many steps on the ground to this cemetery.

Zoroastrians consider the four elements of water, wind and soil of fire sacred. Also, for this reason, Zoroastrians residing in Yazd believed that the soil should not be impregnated with the contamination of human bodies. So, they would not bury them in order to destroy the bodies. Besides, they put them on the pavement in front of the sun in order to destroy the body over time or get a share of it to birds and vultures.

Furthermore, after the bodies destroyed in this way, they would throw the remaining bones into a rock well and crush them with other roller stones. Also, it seems strange, but it really was Zoroastrian tradition in Yazd until the mid-1960s.

In addition, they had created a relatively wide circular and enclosed place to destroy the bodies in this way on the outskirts of Yazd. So, it currently called Crypt Mountain. Also, Silence Tower located near safaiyeh area in the southern part of Yazd. Besides, these two tower locations are now called Zoroastrian graves or silent towers or silent towers.

The Silence Tower made the same and did not have an exact size or dimensions. Also, based on the number of populations and people in Zoroastrian towns and villages. Besides, in order for contaminated materials not to hit the ground, Zoroastrian cemeteries in Yazd built with raw clay and plaster.

Moreover, the construction of Silence Tower in Yazd has principles that they observed during construction. Besides, it was the banging of 4 large nails, 36 medium nails and 260 small pegs on the ground. Also, they made 100 cotton threads as a string, and three times they wrapped the string around the cemetery around these banged nails.

As mentioned above, inside the Zoroastrian crypt grave in Yazd called Silence Tower a pit that sold with very large boulders. Also, the pit divided into three different sections for different people, including:

– The upper strip is close to the wall of the cemetery, which is for men.

– The middle bar part located after the men’s section is for women.

– And finally, the internal tape located after the women’s section is for children.

Moreover, at the end of the middle part of the pit that is the position of the bones. Besides, that the bones of all three categories poured in this pit, the end of this pit a moving boulder called Erois.

What is Crypts in Silence Tower?

Before getting to know Silence Tower first, it is good to know what the crypt is. Also, Crypts actually buildings made of raw clay that used in ancient times. Besides, for example, they used as a place to perform religious ceremonies after a person died. Furthermore, Zoroastrians, from ancient times until a few decades ago put their bodies in these crypts after special ceremonies with certain customs.

In addition, these crypts either made naturally or made by humans. Besides, all of which were at altitude so that birds like vultures could easily access the body. After that, their bones placed in the well to prevent soil contamination. Also, at that time, the Zoroastrians tried to settle in villages and outside areas so that even the wind did not bring some of the pollution of these crypts to the city.

Moreover, the Zoroastrian crypt of Yazd is the Silent Tower or Silent Tower, located 15 kilometers from Yazd city, near the Safaiyeh area and on a low-lying mountain. After reaching this area, you will encounter two mansions, one of which is older than the other.

In the case of this crypt, dome-shaped roof, all over which covered with boulders. Also, these quirks divided into three sections in Silence Tower : male, female and childish. Besides, the end of the labyrinth, which tasted on the wall, is for men, the middle circle for women, and the bar after that is for children. Furthermore, in the middle of this place, there is a very large well, which was actually the burial place of the bones.

In addition, the two quirks are more famous than the others in Silence Tower. Also, the older crypt called Mankaji Hatria, which related to a Zoroastrian but of Indian origin. Besides, the second crypt, known as the Golestan crypt, dates back to the Qajar era. Moreover, on the northern side of this low-lying mountain, on which the crypt located and known as Crypt Mountain. So, there are several other mud and clay buildings dating back to the Safavid era and at that time they used as welfare buildings.

you can book our Iran Historical Tours to see all the beauties of Yazd and also other historical cities of Iran. Don’t hesitate to contact us in case you have any question regarding any topic about Iran and its beautiful cities.