Do you want to visit Saadi tomb in Shiraz? Do you know how to travel to iran in 2021? This is great and you can be sure that the most exciting experiences will be waiting for you. In this article, we introduce all the requirements to travel to Iran.  The best travel and tours of Iran to desert destinations, the north and tourist cities of Iran are collected in the form of best iran tours packages2021 on Iran Destination website. Also, we answer this question: is iran open for tourism.

All about Saadi tomb

Shiraz is one of the oldest and most popular tourist destinations and in its smell of poetry and politeness caresses tourists. Also, Shiraz mentions Hafezieh in minds. Besides, we should not neglect Saadi Tomb, the tomb of the unmatched master of speech, in this beautiful city. Furthermore, the interesting thing about this tomb is that it was Saadi Tomb of residence during his lifetime.

Moreover, it took a lot of hard work on the trips. Also, he himself said in Golestan that his feet naked and he did not have a popups. Besides, he missed the comprehensiveness of Kufa and saw one who did not have a foot. So, he was grateful for God’s blessing and waited for the shamelessness. In addition, he discovered the instrument of Betty and threw and killed the Brahman who was there in the pits.

Besides, in the garden, he has recommended this method against all deceitful people. Also, Saadi’s anecdotes are generally a reminder and full of advice as well as some of his obedience. Furthermore, Saadi considered faith as a source of condolence and considered the way to heal the wounds of life as love and friendship. So, the reason for Saadi’s long life was his strong faith. Moreover, his famous works are The Book of Golestan in prose and Bustan in the nearby sea as well as his sonnets. 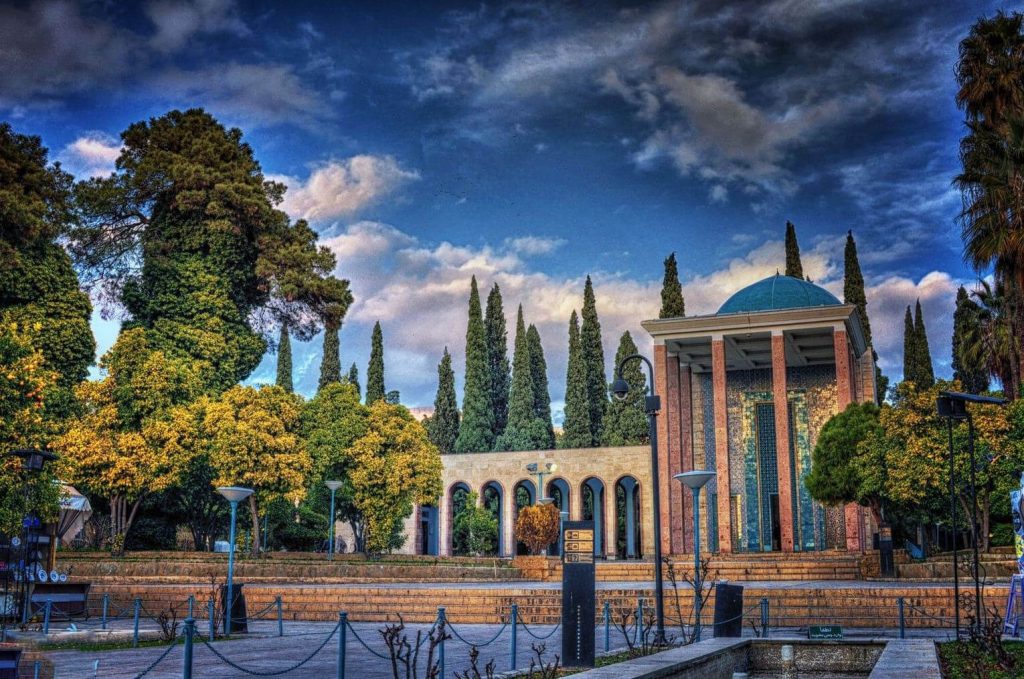 The Saadi Tomb is one of the sights of Shiraz. Also, it located at the end of Boostan Street and next to Delgosha Garden, on the hillside, northeast of Shiraz.

Musharraf (Sharaf) al-Din Mosleh Shirazi, known as Saadi Shirazi, was a powerful Iranian poet and writer of the 7th/10th century. Also, in some references, Saadi’s birth date mentioned in 585/685 and in others 606 (he was probably born between 600 and 615 AH). Besides, Saadi’s demise  mentioned in most references of 691 AH.

Saadi was born in Shiraz. Also, he was a child when his father died.Besides, his mother was Kazerooni. Moreover, as a child, he attended school with great interest and learned the basics of knowledge. So, when he was a teenager, he showed great interest in research, religion and knowledge. Furthermore, the unstable situation in Iran was at the end of the reign of Sultan Muhammad Kharazmshah. Actually, especially the attack of Sultan Ghias al-Din Kharazmshah, the brother of Jalal al-Din Kharazmshah to Shiraz (in 627/627 AH), prompted Saadi, who had no air but knowledge, to leave Shiraz.

In addition, Saadi began his tourism in 1126 CE and traveled to various cities in the Near East and Middle East, India, Abyssinia, Egypt and North Africa. Besides, this tourism lasted 30 years. Moreover, the stories that Saadi brought in Golestan and Boostan reveal his attitude and insight. Also, he had graduated at The Nizamieh School in Baghdad where he given “urine” (meaning salary) and pension).

Rai first built in the 7th century by Khwaja Shams al-Din Muhammad Sahib Divani, the famous minister of Abaqa khan, a tomb over Saadi’s grave. Besides, in 998/ 998, by the order of Ya’qub Zolghadr, the ruler of Fars, Khanqah al-Shaykh destroyed and no trace of it remained.

Also, until in 1187 AH, on the orders of Karim Khan Zand, a mollugal mansion of plaster and brick built over the grave of shaykh consisted of two floors. Downstairs had a corridor where the second floor staircase started. Moreover, during the Qajar era (1922), fath’ali Khan Sahib refurbished. Besides, a few years later Habibullah Qavam al-Mulk Khan ordered the repair and repair of a part of rwbana.

Mohsen Foroughi was a modernist architect who loved Iran’s history and cultural background. Also, he considered the formal and apparent conception of history to be superficial to his young colleagues. Besides, he believed that the relationship between buildings in terms of style and form divided into two categories: the apparent relationship and the actual relationship.

Besides, Foroughi designs the mausoleum in collaboration with Ali Akbar Sadegh inspired by elements of traditional Iranian architecture. Also, the National Association’s report describes the mausoleum as follows:

The architectural design of the complex consists of a long columned porch and a stretched porch, organized as an “L”. Also, the building was built during the time of Karim Khan until 1948. Besides, in 1950, the current building built instead of the old building and its official inauguration ceremony held in May 1952. Furthermore, the building built based on chehel sotoun palace and a combination of old and new Iranian architecture..

In addition, his tombstone located in the middle of an octagonal mansion and its roof decorated with turquoise tiles. Besides, there are seven inscriptions which selected from parts of Golestan and Boostan, Qasida, Bada’i and Tayyibat al-Shaykh and wrote in the script of “Ibrahim Bouzari”. Also, the text of another inscription, “Ali Asghar Hekmat”, installed on the grave of the sheikh. Moreover, it placed the following inscription, which is one of the poems of the garden, with the excellent Nasta’liq script on it:

The pond located on the left side of the Saadi tomb. Also, it is octagonal inside and has an infrastructure of about 30.25 square meters and connects to the tomb courtyard with 28 stairs. Besides, it is well-known that Saadi built marble ponds near his angle where water flowed. In addition, in the past, washing in this water, especially on The Night of Chaharshanbeh Soori, was one of the people’s believers in Shiraz

Moreover, the tiles inside the fish pond designed in 1993 by Master Kashkar “Shooter” and performed by Cultural Heritage. Besides, over the fish pond, an octagonal skylight and two quadrilateral skylights located on its sides. Furthermore, tilework in Saadiyah’s basement mausoleum has become a traditional tearoom today. So, there are two brick buildings next to the fish pond. Thus, it related to the office, and another building, the Saadiyah Public Library.

Iran tourism is very attractive for tourists from different parts of the world. These trips are held in the form of best iran tours packages2021 to several destinations in one region. Also, sometimes tours from the north to the south of Iran. Iran tours are very attractive due to the conditions of the event. If you are planning to visit Iran, be sure to participate in these tours. Of course, Nowruz tours in Iran are much more diverse. Also, you can take full advantage of the Nowruz holiday for Iran tours.