Saadabad palace:  is a 300 hectare complex which is built by the Qajar and Pahlavi monarchs, located in Shemiran, Great Tehran, Iran. There, is located the official residence of the President of Iran.
On different occasions, villa-palaces and mansions were erected on the beautiful range among aged cypresses and aspens, in almost the vicinity of the remnants of aged and weather beaten Qajar mansions the facades of which were constructed in bricks.
Palaces were changed into museums in a suitable way to represent the finest works of art from Iranian and non-Iranian artists to the large number of visitors after the Islamic Revolution.
Today, there are 10 museums open to the public as follow:

the first palace built in the complex during Pahlavi dynasty by Reza Shah’s order. It is a green palace because of the color of its facade. The palace is a nice museum of Persian art such as mirror marquetry, carpets, and illumination and plaster work. 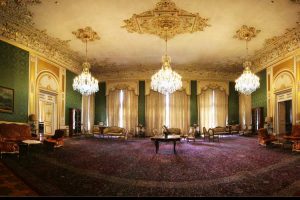 There are two stories; different small and large rooms were served as residence and office of Reza Shah Pahlavi and his son. Rooms were divided as sitting room, waiting room, reception hall, dining hall and bedroom. Chandeliers and paintings are European made and there are four big mural painting the subjects of which are Iranian myths.

This collection Includes a lot of works of art purchased from other countries and represents the civilizations of pre-Islam Iranian, African, Indian, far east, Eskimos, Mayas and contemporary arts of Iranian as well as non-Iranian artists.

The main paintings of this museum in this collection are the oil paintings of Safavid, Afshar, Zand and Qajar periods collected by Mohammad Reza Pahlavi’s last wife, Farah, from an English collectioner called Harold Emmer.

This museum is devoted by Hossein Behzad, to the miniatures painted, who made a revolution in Iranian painting. This style is purely Iranian, but it has kept on with its contemporary paces and changes of art in universal art schools.

The miniatures in this museum are works of a 20th century artist called Klara Abkar who had her particular style in painting. Her source of inspiration was the rich Iranian literature and mysticism.

The main subject of this museum is the most important post-Islam Iranian art namely calligraphy. There are plenty of various calligraphic styles of writing belonging to 10th to 19th centuries on paper and parchment. In some cases, some calligraphy-related arts like illumination, painting, etc are exhibited.

The lifestyle and customs of Iranians through the history are displayed from cultural perspective. In a vast area and of two floors, various objects are exhibited like tools for irrigation, agriculture, husbandry, fishing and hunting as well as agricultural documents, clothes, lighting tools and handicrafts.

This museum in an exhibition of ancient and traditional techniques and instruments for water supplement and distribution. Various water-related vernacular structures are introduced like water reservoirs and traditional icehouses. Some ancient water dams and royal orders concerning them are presented as well.

the objects of the museum are displayed on two floors. The military uniforms of Achaemenians up to the present time are exhibited. The weaponry on display consists of some unsophisticated ones used in the ancient times until the firearms periods. Part of the history of Iraqi-imposed war against Iran (1980-1988) is also exposed to visitors.