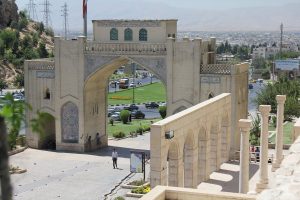 Quran Gate in Shiraz : This gate is located in the entrance of the Shiraz. 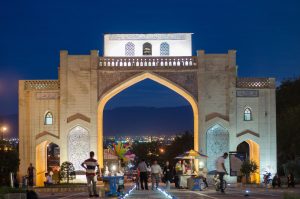 Quran Gate situated in Northeast of the Shiraz located at the entrance of this city is another major site in Shiraz. During Deilamian, in the middle of Tang-e-Allaoakbar, at Babakouhi Mountain and Chehel Moqam, a tall arch like a gate was built and its founder was known as Azzadaddoleh Deilami. The first construction of this monument was made of stone and plaster. After building this gate, he ordered a large Quran known as ” SEVENTIN MAN ” Quran to be put on it for caravans in order to pass under it to wish them safety in their journey. Since this Quran was put there, the gate named “Quran Gate” and has been remained in this name until now. This Quran is in two volumes which dates back to Teymorian era and was written in SOLTH and MOHAQAQ line by Ibrahim Sultan.

The current structure of Quran Gate was re-built with an attempt of one of the merchants of Shiraz called “Hossein Aygar” known as “Etemaddaltojjar” in 1327 AH. Tomb of the founder of this gate is placed in east part of this monument.

You can visit this place through any of our Iran tour packages offered by Iran Destination, Iran Travel Agent, that include Shiraz.