If cultural and historical attractions aren’t enough to satisfy a sightseeing tour, Iran’s dramatic landscapes offer the demanding traveler a wealth of awe inspiring views to discover. From mountains to deserts, to forests and caves, there are the most beautiful natural features in Iran in this article.

More than 65 kilometres northeast of Tehran, at a height of 5,610m, Mount Damavand is the highest mountain in the Middle East, and a worthy challenge for any accomplished mountaineer. Visible from Tehran on a clear day, the mountain is snow capped all year round, and features prominently in Persian folklore and literature. Located in the Alborz Mountain range, reaching Damavand’s peak will take the best part of two days and earn you the eternal respect of any Iranians in your life. 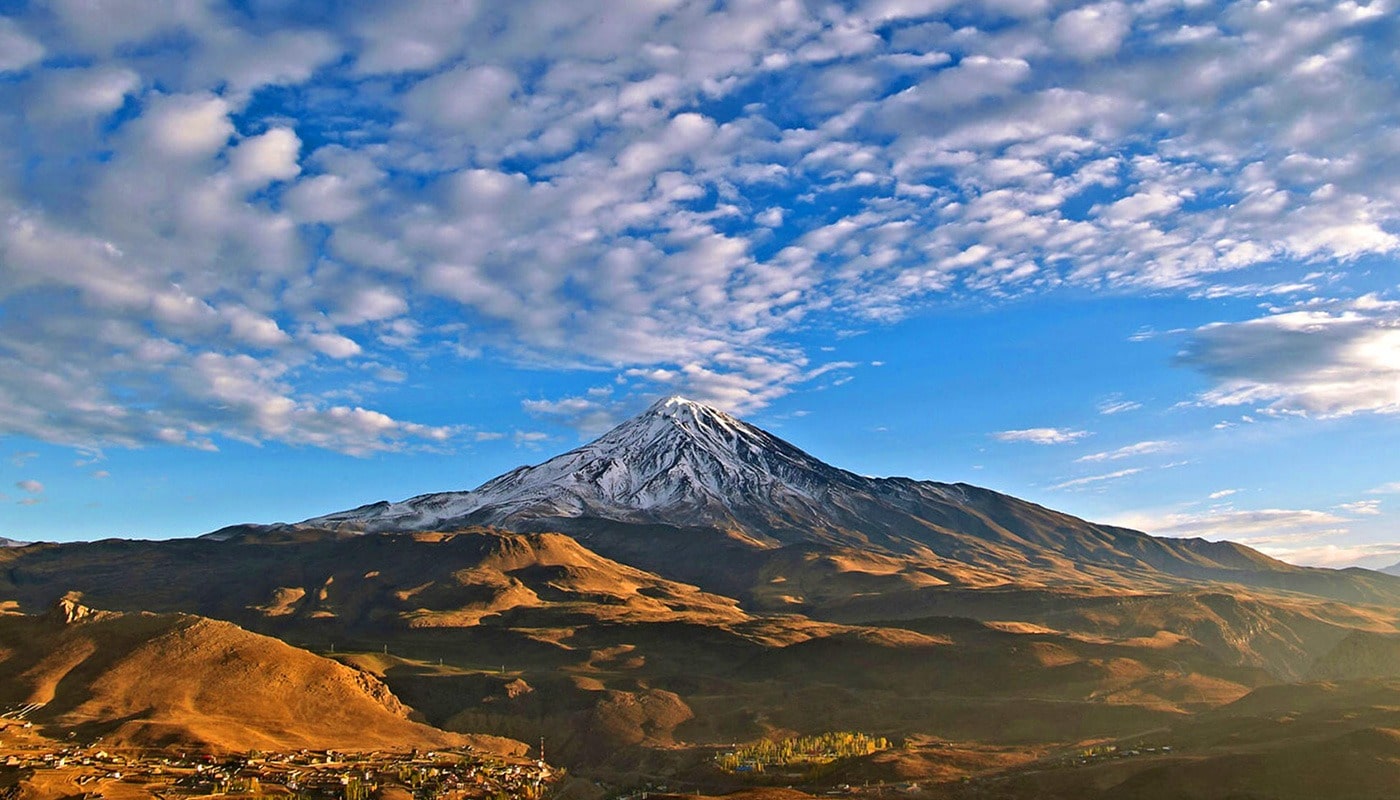 The Turkmen Plains, or the Torkaman Sahra, lie in Iran’s north eastern region, bordering Turkmenistan and the Caspian Sea. The seemingly interminable rolling green hills remain virtually untouched and tricky to access without your own car, but the views are simply spectacular. One focal point to head to is the Khaled Nabi cemetery, notable for its tombstones. Also nearby is the famous 11th century tower structure Gonbad-e Qabus, memorialised in the west in Robert Byron’s travelogue The Road to Oxiana.

The Dasht-e Lut (Lut Desert) is one of Iran’s two great deserts, covering an area of over 50,000 square kilometres in the central eastern part of the country. Reportedly laying claim to the hottest land surface temperatures ever recorded, an astonishing 70.7 degrees, it is not an ideal location for an afternoon picnic. However, the weather beaten, moonscapes of the desert make an unforgettable venue for night-time camping beneath the stars. Also, the views at dawn are mesmerising. Tour guides will take you from the city of Kerman for a reasonable fee. Be sure to check out the mysterious kaluts too, the famed giant rock formations of the desert.

The Dasht-e Kavir, or Kavir-e Namak (the Great Salt Desert), is Iran’s other massive desert, located in the centre of the Iranian plateau, northwest of Esfahan and Yazd. Harsh, barren, and unfathomably hot, you won’t want to wander the expanse aimlessly or unaccompanied, but it remains an impressive sight to behold. The Namak (Salt) Lake, 100 kilometres from Qom. Moreover, It is the most tourist friendly feature of the desert, the magnificent, white vastness of which will give the salt flats of Bolivia a run for their money.

A two-hour drive from the city of Kashan in Esfahan province, the Maranjab desert boasts some of the sandiest dunes in the country. Whilst most of Iran’s deserts are salt, rocky, or scrubland, Maranjab caters to more stereotypical desert fantasies. You can combine a tour with a visit to the Namak Lake, not far from here, with the option to rest your head in the remains of a 16th century caravanserai. 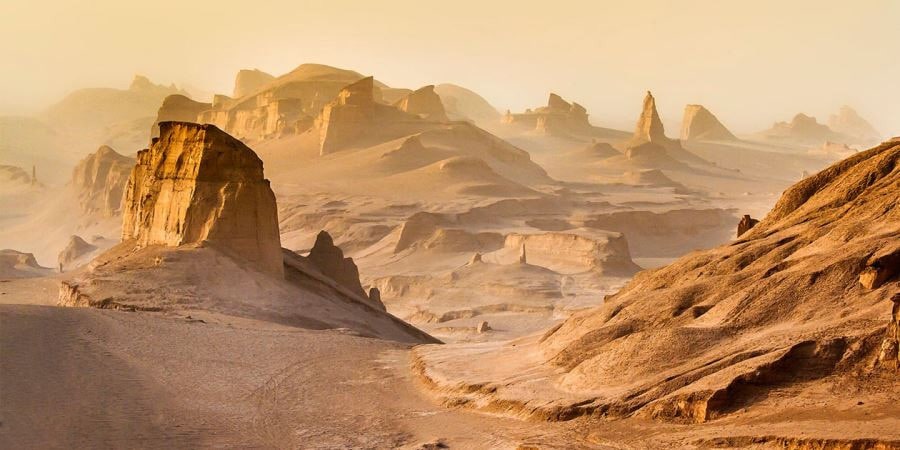 The forests of the northern province of Gilan are an area of outstanding natural beauty. Also, They offer some beautiful hiking trails for tourists. An eight hour drive from Tehran, the mountainous Masal region has some particularly popular walking routes, although you’d be wise to bring your own supplies as shops and hotels are few and far between. consequently, The mixture of lush lowlands and mountain forests make for a pleasing contrast with the harsh landscapes of southern Iran.

Whilst in Gilan province, it’s worth heading to the northern county of Astara to see Iran’s highest waterfall. Against a breathtaking backdrop of forested mountains, Latun falls from a height of 105 metres. The tranquillity of the surrounding waters makes a perfect lunchtime pit stop, or even a refreshing swim if you are feeling adventurous.

For geology enthusiasts, the curious rock formations of the Badab-e Surt are a must see natural wonder. It is Located in Mazandaran province in northern Iran, about 100 kilometers south of the city of Sari. So, the area consists of golden, orange, and red stepped terraces of sedimentary rock. Also, deposits of minerals carried from nearby hot springs formed it.

Namarestagh is a beautifully lush region in Amol County, Mazandaran province. Therefore, A hidden treasure for trekkers, when exploring the verdant foothills in the shadow of snow-capped mountains, few can resist an enveloping sense of wonder. A hospitable climate and welcoming locals, this rural utopia promises to warm the soul and quiet the mind of any passing wayfarer.

Qeshm is famed for its unspoiled natural beauty and diversity. Moreover, The largest island in the Persian Gulf, Qeshm boasts some particularly impressive geological features. the Namakdan salt caves, for example, are reportedly the longest of their kind in the world. The intriguing erosions of the Chahkouh Valley are also worth a visit.

This village in Kurdistan is among places in Iran that every tourist should list for their travel destinations. So, It is the name of a mountainous area located on Iran-Iraq border. Beautiful valleys with lush rivers and exquisite landscapes along with interesting stair-stepped architecture of Uraman village are among the interesting attractions of this area. If you are traveling to Uraman, be sure to try the local breads of this area and don’t forget to visit Marivan and Lake Zarivar. 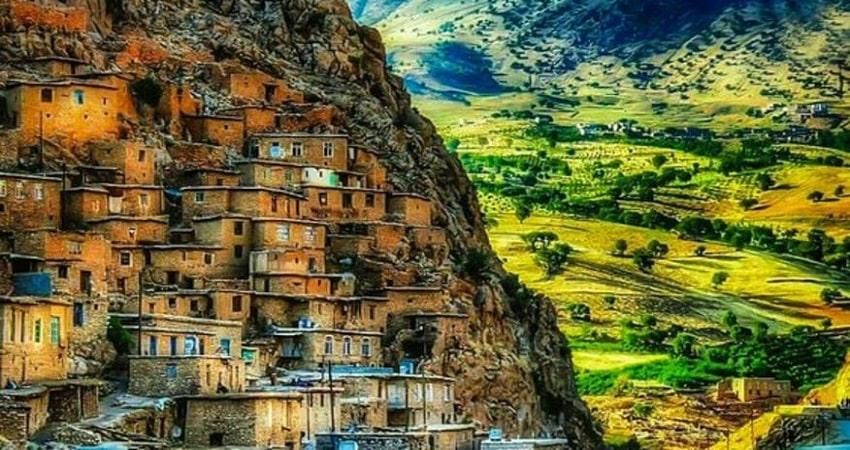 Subatan Villages is undoubtedly one of the most beautiful places in Iran. However, It is less known to the public because of the difficult access routes, but it is well-known amongst adventure travelers. Moreover, Subatan is at the height of Talesh. Visitors generally begin hike from the southwestern side of the mountain (from Lake Neur) to this unique village. The best time for a trip to Subatan is June when fresh blossoms and fragrant flowers appear everywhere.

Is a winding road that connects the beautiful and green provinces of Ardabil and Gilan. From the beginning of this 70km road, you will find pristine nature, wild beauties, waterfalls, lakes, vast plains of flowers and rare plants. Half of this is the forest and the other half is the plains and mountains.

Also, Near Khalkhal, there is a well-known hot water called “kiwi” that is not very well known and you can swim without worrying about car parks or the surrounding crowds! 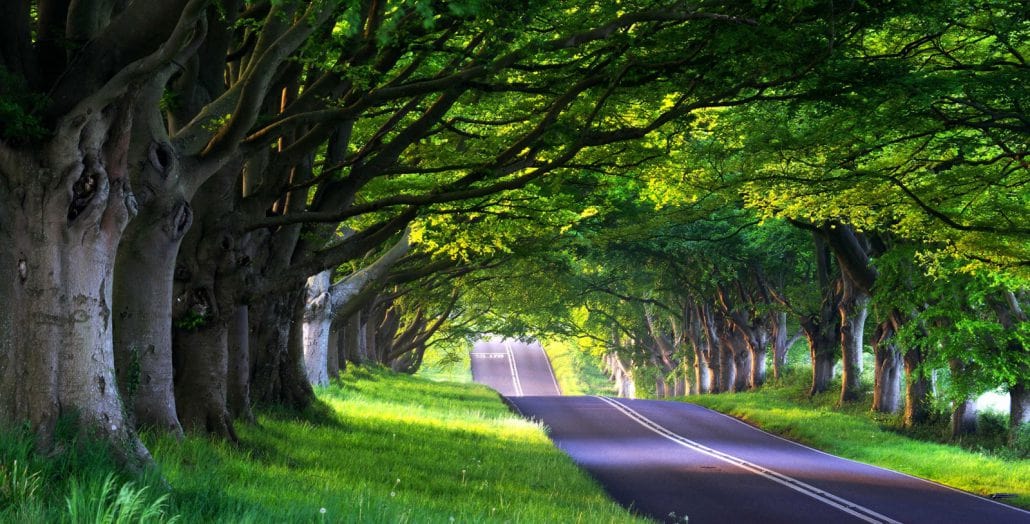 Dom-e-Asb Gorge located in the “Kohmareh Sorkhi” region (50 km south of Shiraz). However, It is one of the most beautiful and pristine areas whose rivers and attractive waterways have made it interesting to visit.  To reach the gorge, first you have to reach the “Koreh-Bas” village from Shiraz. Consequently, Dom-e-Asb spring, lands along the trail. Also, the gorge itself are parts of some private lands belonging to people of Kozarg village.

Therefore, The clearly navigated path has many ups and downs. In some places, one would need scrambling, crossing rifts and chimneys individually. Along the way, from top of the mountain, you see a deep valley in the heart of the roaring river of Dom-e- Asb.  It enters downstream villages after passing a narrow gorge. Further on, the landslide has created a 200-meter-long lake that can be crossed by swimming or boats. Continuing this path leads to the waterfall.

Near the town of Kelardasht, there is a village called Mazichal with an altitude of 2600m above the sea level. Also, Spectacular Mazichal Heights and scenic landscapes with picturesque views increase the atmosphere of this integrated mountain village and passing through a forest of clouds make the roads more memorable.

Consequently, According to Iranian canyoning experts, Raghaz is considered the best choice to embrace the challenge and excitement. There are many canyons in Iran but they are not as easy as Raghaz to traverse. It is one of the best canyoneering adventure experiences that you can have in your life. Canyoneering challenges many skills such as keeping balance, physical and mental fitness, swimming, rock climbing and more.

Above all, high cliffs on both sides surround the four kilometer long Raghaz canyon lies peacefully in the middle of mountains. The word Raghaz means slippery, and locals know this beautiful valley as “Rud Khiz” Canyon.

Raghaz is a pristine and spectacular place. But, keep in mind that going deep into this canyon is not easy for beginners. Traversers need to have at least a basic familiarity with swimming, rock climbing, and canyoneering techniques; professional equipment is needed as well.

So, One of Iran’s most spectacular landscapes is in the cloud forests of Caspian Hyrcanian eco-region. Therefore, the air pressure is difference, Because of their location in the mountains where the mountains let the clouds get through and come into the forest. This phenomenon makes you able to walk on the clouds. Shahroud Cloud Forest is one of the most beautiful and spectacular areas of Iran. Also, It is located 45 kilometers north of Shahroud in Semnan province. 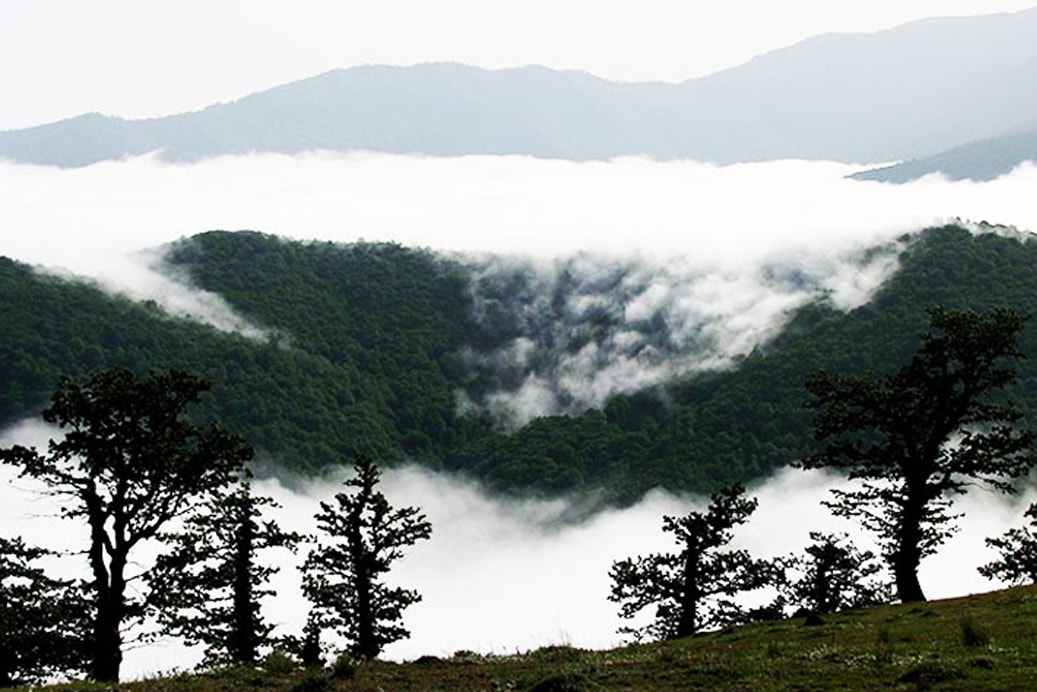 Ali Sadr cave is one of the biggest attractions of Hamadan province. Moreover, It is ranked among the most popular sites of Iran with thousands of visitors year-round. Also, This cave is located in Kabood Ahang , a city 60 Km from Hamadan. The distance from Kabudarahang to Alisadr Village is 50 Km. This cave is located on the elevated lands of Sari Qieh, meaning the yellow rock.

Above all, Ali-sadr is one of the few water caves in the world. Its  Jurassic Period rocks from the second geological period, takes you back to 190 million years ago. As you walk through the entrance, you will be greeted by a cool atmosphere. The lake here is clear, so that its floor can be seen. You have to wear the life jacket and get on the boat and go through the natural labyrinth of the cave. Also, You have to get off the boat somewhere and continue your journey