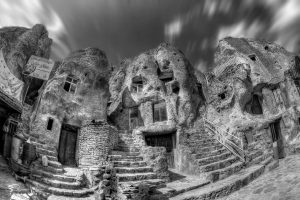 Meymand village of Kerman : Meymand (also slept Maymand and Meimand) is a village of troglodytes – cave dwellers – located in the south-eastern Iranian province of Kerman. Meymand (Maymand, Maimand) village has been continuously inhabited for 2,000 to 3,000 years making it one of Iran’s four oldest surviving villages. Some claim that Meymand / Maymand village has been inhabited for 12,000 years, that is, since the “middle stone ages”, making it a Mesolithic village. Reportedly, 10,000 year old stone engravings and 6,000 year-old pottery have been discovered at the site. 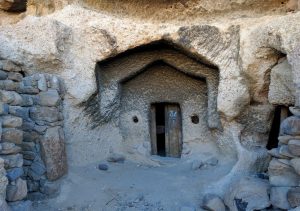 The village is a UNESCO world heritage site and was awarded UNESCO’s 2005 Melina Mercouri prize.

Meymand village is located some 35 kilometres northeast of the town of Babak – Shahr-e Babak, a Kermani town on the road that runs between Tehran in the north and the port of Bandar Abbas in the south. Shahr-e Babak means Babak’s city and Shahr-e Babak is said to be the birthplace of the founder of the Persian Sassanian dynasty c.200 CE The road from Shahr-e Babak rises into the surrounding mountains until it reaches Meymand at an elevation of 2240 metres. 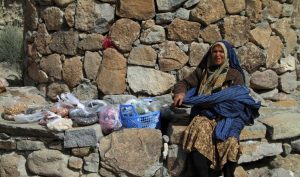 Meymand Another site with numerous petroglyphs is the Eshkaft grotto, eight kilometers north of Meymand / Maymand. The grotto, a shallow cave with a large mouth, is reached by travelling on a dirt road that heads northwest from the village and passes through the Lakheiss region in the Lakhorin heights. The road terminates at the foot of Tekhorin mountain in whose slopes Eshkaft is located. Visitors are known to light and place candles beside the rock art.

Meymand is one of the districts of Shahr-e-Babak, and is one of the spectacular villages of Iran. Here there are a mass of crypts, with 15 stony, circular and roof-less chambers. The same covers an area of approximately 400 sq. m. This vicinity seems to be a place of burial, as skeleton bones and other articles have been found here. The stony mosque of Meymand is another interesting site in this village. The ancient houses in this rural settlement resemble minarets constructed in the breast of this hard stone mountains. In these minaret shaped dwellings which are very strong and durable, are chambers, corridors and pillars displaying an intriguing architecture. 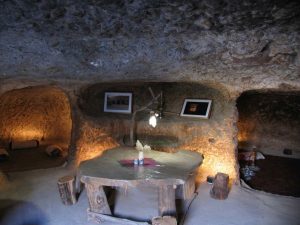 Meymand Rock art can be found in and around Maymand. Three kilometres northeast of Meymand, beside a gravel road that runs towards the Tela valley, lies a hill called Mar Khazineh (Mar in the local dialect means hill). A 350 m. climb down the hill brings us to an estodan (ossuary) plot filled with the scattered pieces of maliciously destroyed ossuaries decorated with rock art. Locals say that these and other ossuaries are from the Zoroastrian-Sassanian era.

Due to the incline of the surrounding valley, these dwellings are placed in a terraced fashion, in four or five steps one after another. These have a height of 2 m. and are nearly 16 – 20 sq. m. in area, and are devoid of windows or chimneys. In the center of each chamber is a stove that was used for cooking purposes as well as warming the dwellings. 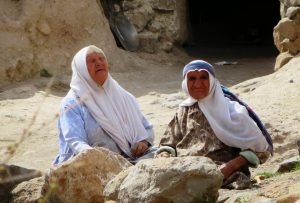 Meymand Indeed we can say that Meymand is parallel to history and is the head of history. According to one of the researches: if you look at Meymand from 0/5 km it seems that you look at the history from a deep cylinder. In other word seeing Meymand means seeing history and the ordinary life of people for who are interested in history, past and its issues. In the other part of his article it has written that Meymand is a place where its history is full of ambiguity. 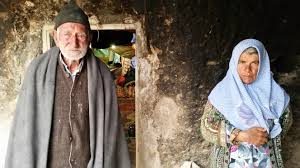 According to some historian the original history of Meimand belongs to 12000 years ago. They say that there is an inscription in 7 or 8 km Meimand that the mentioned date has been engraved on it. The mosque of Meimand is the other spectacular in the village. Old houses of the village are as minarets in the heart of mountain. These houses represent special rustic architecture. Meymand included among the four recorded villages of Iran in UNESCO.

The village of Maymand is located at an altitude of 2,240 meters above sea level and between plains and mountains. The plain has been covered with pistachio trees and wild almonds in the past. Around the village mulberry and blackberry trees are abundantly found. A variety of medicinal plants such as black thyme, sage, yarrow, marshmallow, buttercup, cumin, taranjebin, lavender, plantain, fennel, oregano, persioshan, licorice, khakshir, shutter, itching, mokhlese, Esfand, rhubarb and artichoke are growing in this region.

The Maymand plain is also full of desert animals such as snakes, chameleons, hedgehogs, turtles and rabbits. In addition, there are various wild animals such as deer, wolves, foxes, antelopes, partridges and birds of prey.

The lifestyle of the people of Maymand village from the past to the present is almost traditional. The people of this village are nomads who live with agriculture and livestock and move between their summer and winter residences in different seasons of the year and maymand is their winter settlement.

The people of Maymand village are nomads who come to Maymand for a winter stay.
The villagers livestock in the plain during the hot seasons of the year. In the cold months, they move to the village and go to agriculture and horticulture. The existence of seasonal river and a number of aqueducts with springs have led to agricultural prosperity in this region.

The construction of handicrafts such as felt, carpet weaving, kilim weaving and basket weaving has been common in the past, which is not very prosperous today. Of course, carpet weaving is still common in this village and their braids are among the best carpets in Kerman province.

Residents of the village of Maymand have maintained many of the customs of their forehands. In such a way that even in their language and dialect, the words Pahlavi Sassanids are still used. One of the ceremonies in this village, which takes place in Muharram and may be rooted in the past beliefs of its people, is boiling or breastfeeding.

This method of mourning is also carried out in Babak, which is slightly different from the type of meymandi, but the basis of mourning is the same in both. In this ceremony, mourning people with the left hand clutch their side of the waist and create a circular ring. Mourners move circled, two steps back, then one step forward, and at the same time, with this chain move, they answered the religious poems of Nuh Khan and beat them to their chests with their right hand. At the welding ceremony in Shahr-e Babakis, mourning people take a step back and then one step forward.

Iran tourism is very attractive for tourists from different parts of the world. These trips are held in the form of the 10 best Iran tours & trips 2022 to several destinations in one region. Also, sometimes tours from the north to the south of Iran. Iran tours are very attractive due to the conditions of the event. If you are planning to visit Iran, be sure to participate in these tours. Of course, Nowruz tours in Iran are much more diverse. Also, you can take full advantage of  holiday for Iran tours.