Meybod is known as the city of pottery and Zillow. A city whose alleys are decorated with brick buildings and brick entrances and domes. If we stay in the city for a few days, our eyes will gradually get used to the mud color of the buildings. So, prepare yourself for a trip to this seven-thousand-year-old city and visit the sights of Meybod, Yazd.

this is a major desert city in Yazd, with a population of about 75,000 making it the second major city in Yazd.

It is an ancient city that goes back to pre-Islamic arena and, hence, is the home to many ancient points of interests. The Historical City of Maybod is part of the Tentative List in order to qualify for inclusion in the World Heritage List. 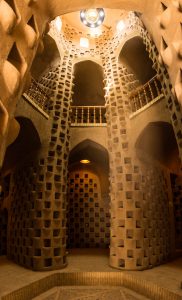 It was the capital of Iran during the Mozaffarid period. Mozaffari kingdom originated from Meybod where the first king was born. One of the oldest castles in Iran is Narin ghaleh in Meybod, which dates back from the Sasanid. Chaparkhaneh and Karvansaraye Abbasi are some other examples of the historical buildings from Safavid era.

Meybod is located in the north of Yazd and reaches Ardakan from the east and north and Sadough city from the south and west. If we move from Tehran to Meybod, we will arrive 6 hours later without stopping. Of course, the desert route forces us to get out of the way near Kashan at least once and breathe a sigh of relief.

Trains from Tehran to Kerman and Bandar Abbas also stop in this city. There are also railways from Qom, Kashan, Isfahan and Kerman.

If we travel to Meybod by bus, we have to get off at the city terminal on Modares Boulevard. Tehran-Meybod buses also depart from Azadi Square.

Many important major poets, Sufis, clergymen and politicians came from this city. Meybodi, the author of “Kashf-ol-Asrar“, Grand Ayatollah Haeri, Hossein Makki and many others lived in Maybod, to name a few. 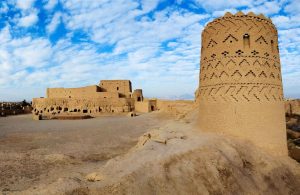 Narin Qaleh is a brick building in the city square of the city. It called Kahndaj or Dalan Fortress. The castle locate on a hill that overlooks the entire city.

The castle is in the shape of an ellipse and has nested rooms, underground passages, a mosque, a bath, a bazaar and a passageway, which the ancients called people. There are holes on the castle walls that are responsible for providing inside light.

Unfortunately some of its historical points were demolished by local authorities who did not understand the archeological values. Yet, it hosts many tourists from every corner of the world every day. 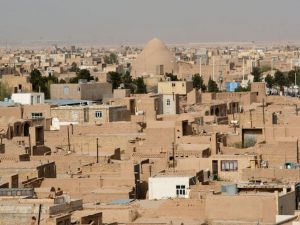 Narenj (Narin) Castle This building, which in colloquial language called Narenj Castle. It is one of the most important relics of the province dating back to the period before the advent of Islam to Iran. And has been recorded as one of the national buildings. This ancient castle has been constructed on the top of Galeen hill and overlooks the city. It seems that upper floors of the building reconstructed and belong to the Islamic era. A section of the building destroyed in the course of road construction during the reign of Pahlavi II.

Here, it has a brick porch with four wind deflectors, and the wind deflectors cool the air a little. There are several rooms around this caravanserai and in the middle of it there is an octagonal pool house. When we go inside the caravanserai, we notice the difference between the cooling and heating devices of the Safavid period.

Also, Visiting the caravanserai does not end in an hour. Because there is a fortress-like building near it, which in ancient times used as a quadrangle. A number of new horses treated to deliver the parcels faster.

On the eastern side of this caravanserai, we see the Zillow Museum, the only Zillow Museum in Iran. Here, too, Zillow tissue taught live. 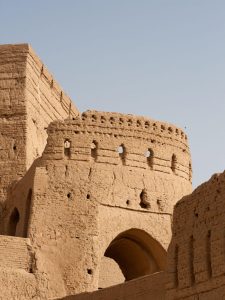 Above all, You can visit this place through Iran tour packages offered by Iran Destination, Iran Travel Agent