In addition, the castle dates back to the Sassanid era. It registered on October 2, 1969 with registration number 883 in the National Monuments List of Iran. 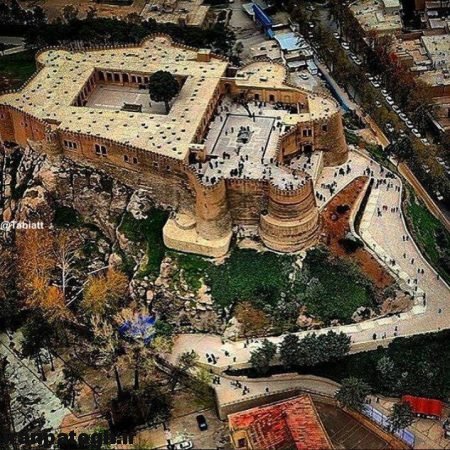 The castle rebuilt during the Qajar era and during the reign of Fath’Ali Shah. Also, in ancient times and at the time of the Narrative Command of the Sassanid dynasty, Falak al-Aflak Castle or Shapurkhast fortress was of great importance and imprisoned Roman captives. Besides, in the 4th/10th century, he bed as the seat of al-Hasanwiya (ruler of Lorestan) and Ganjur during the Buyid period

In addition, in recent years, with the restoration of the exterior and inside the castle, archaeological museums, anthropology, object restoration laboratory, cultural production sales center and traditional tearoom have been launched in this historical cultural complex.

Moreover, When Alexander of Macedonia attacked Iran, the rulers of the time decided to hide valuables made of gold and silver in it, thus protecting them from Alexander. Besdes, after 2,000 years of antique objects accidentally by thieves! Some of these objects refurbished and are kept in the Castle Museum today.

Also, inside Khorramabad Castle, a laboratory equipped with restoration of ancient objects has constructed and beside it is a library with exquisite books.

Khorramabad Castle is 5,300 square meters and its tallest tower is 22.5 meters above the hill. Also, the materials used in the construction of the castle are stone, brick (red and large), clay and mortar gypsum and lime. Besides, the entrance of the castle also built in the southwest tower with a width of 10 meters and a height of 3 meters.

In addition, over the past few years, the castle has repaired and refurbished many times, and most of the changes made during the Safavid and Qajar eras. Also, indigenous people and some historical documents say that until 100 years ago there was a double-sided, adobe and twelve-tower baroe surrounding the current building, of which only two towers remain in the northwest and southeast.

Moreover, there are two courtyards in the castle, the first of which surrounded by four towers. Also, two of these towers located in the north and northwest, and two in the southwest and south. Besides, the second courtyard also has a structure similar to the first yard. So, on the four side of it are large halls that connected to each other. This is the spot that has become a museum today.

Also, the bathroom located in the north of the first courtyard, and the well has also been dug nearby so they can provide the water needed for consumption in the bathroom easily. Besides, until the end of the Qajar dynasty, baths used and the remnants of this era still visible.

In addition, the well was also next to the bathroom and was dug behind a long vault. Besides, the well has made its way to golestan water source using rock sections and has gone up to 40 meters deep.Furthermore, in ancient times, the water needed by the inhabitants of Falak al-Aflak Castle supplied from this well and today it can exploit.

This valuable work handed over from the army to the former Ministry of Culture and Art in 1970 and registered in the National Monuments List of Iran no. 883. Also, in 1975, the building transformed into a museum with the establishment of the Museum of Anthropology and The Mofraghs of Lorestan. Besides, in recent years, with the restoration of the exterior and inside the castle, archaeological museums, anthropology, object restoration laboratory, cultural production sales center and traditional tearoom have launched in this historical cultural complex. 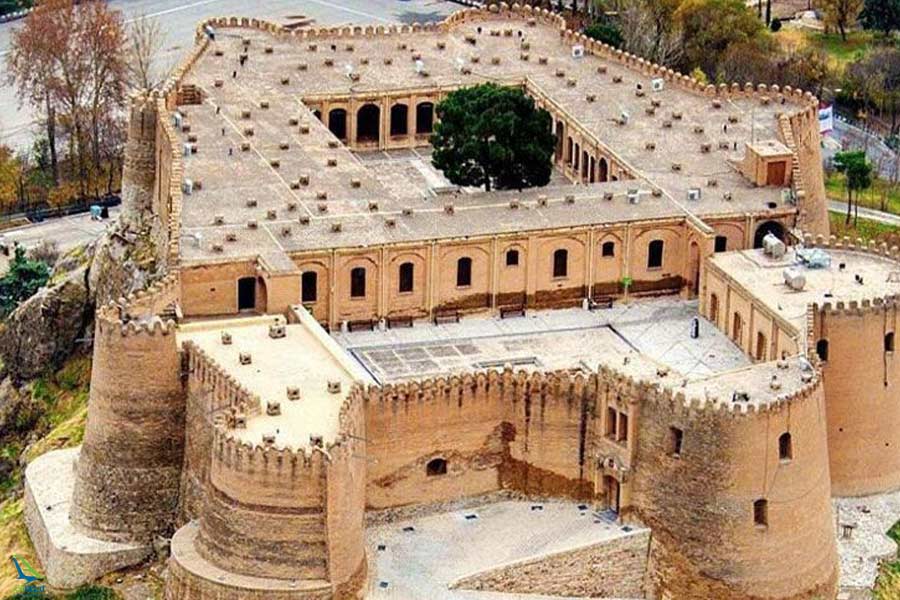 Brick Minaret: A famous structure built 900 years ago in the south of the city. Also, the height of the minaret reaches 30 meters and its base area is 5.5 meters.

Inscription: Writings in Kufic script located north of Falak al-Aflak Castle. Besides, it reaches 3.5 meters and dates back to the 6th century AD. Also, there are rulings about tax forgiveness, grazing livestock in Shapur’s pastures, and banning some undesirable traditions.

Broken Bridge or Shapouri Bridge: A bridge in the center of Khorramabad city that built during the Sassanid era, its length is 350 meters and its width is 5.8 meters.  The height of the tower 8 meters from the riverbed.