Damqan a city in Semnan province is one of the old cities of Iran. The oldest mosque in Iran is in this city which was a fire temple and after Arab conquer they turned it into a mosque. This building is a perfect model of early Islamic mosques, inspired by Sassanid architecture. The chamber of mosque is on 18 pillars that look like Sassanid castles architecture.

The other tourist attraction near Damqan(35 Km north) is Cheshmeh Ali and its pavilion.This pleasant place used to be the resting place of former kings and rulers, because of that Aqa Mohammad Khan and Fath Ali king of Qajar built beautiful buildings in this area.These buildings have two parts,one is an adobe construction with Safavid architecture and was used by Aqa Mohammad Khan of Qajar. The second building is a two story building. it is made with brick walls and stone foundation which is located in the middle of a natural lake. This one was belonged to Fath Ali King of Qajar who was born here and spend vacations here during the year.

Tapeh Hesar, another ancient attraction of Damqan is located south of this city. The history of this city dates back to 4000 millennium to 1000 millennium BC. It comprise of three different historical period. The third story belongs to age of Iron when people used to e farmers and used metal tools. Due to the fact that their deceased were located towards the sun it can be presumed that the god of sun was of a high importance. In the first and second period a huge change is seen in the color and substance of tools and also the way of burying their dead people which can be the result of foreign invasions. 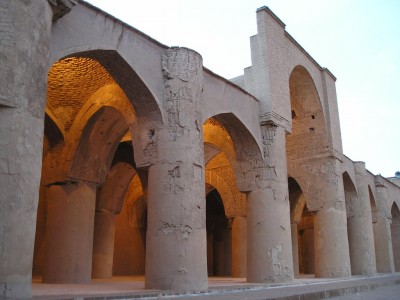 For any further information regarding our tours and offers, please click on our best selling Iran tours: