Bishapoor is one of the ancient cities of Iran in the central part of Kazerun and in Fars province. Also, Bishapoor which built during the Sassanid era and today its ruins remain, and in 2018/06/30, it finalized at the UNESCO World Heritage Site at the Bahrain Summit.

Furthermore, Bishapoor is one of the oldest cities with a history of building it in written stone. Besides, Bishapoor has been one of the special design and engineering cities of its day. Moreover, in historical books, the city’s name recorded as Bishapoor, Shapur, Bishavar and Andishapur.

In addition, Bishapoor was the capital of the state and Ardeshirkhooreh furnace. So, Bishapoor inhabited until the 7th/10th century and then destroyed. Also, Bishapoor is a treasure trove of valuable Sassanid artifacts such as the Temple of Anahita. Besides, the architectural style of the building is the party style. 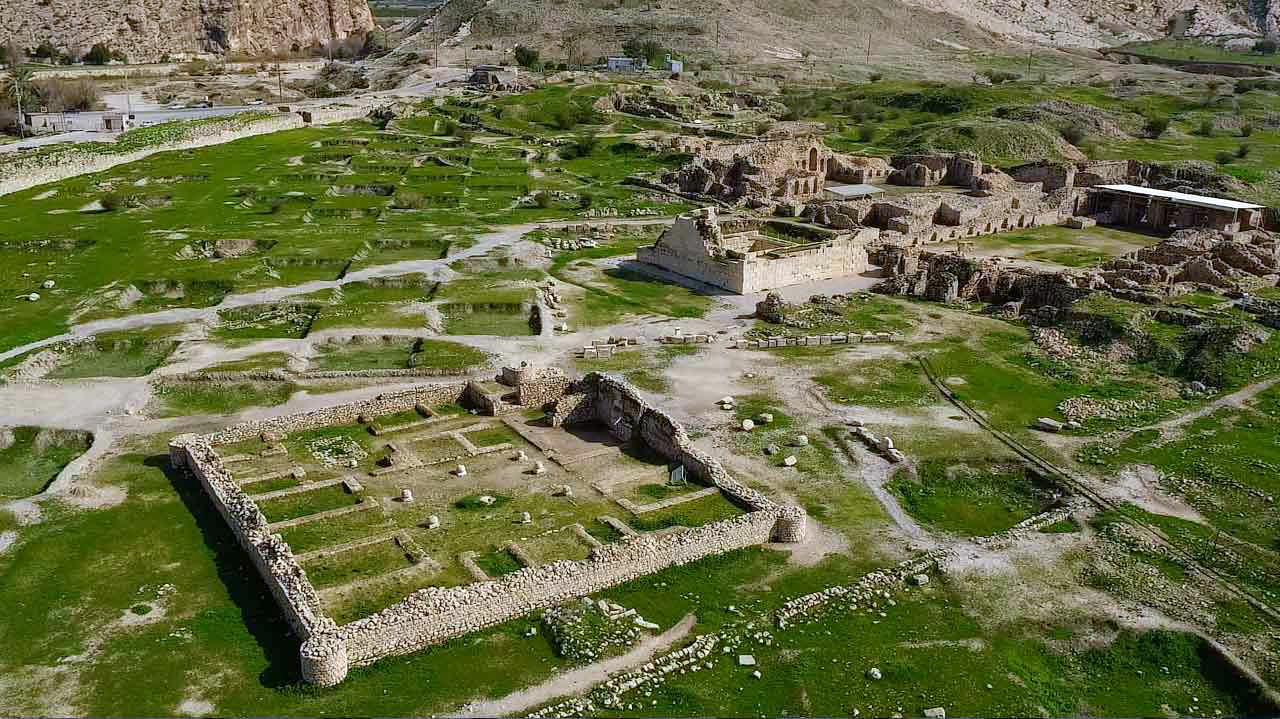 Bishapoor built in 266 CE on the orders of Sassanid King Shapur I. Also, after Shapur’s victory over The Roman Emperor Valerian, Shapur ordered the city’s Ctesiphon to build a city in a well-weathered area on the way to Persepolis. Besides, during the Achaemenid period, the road connected the cities of Persepolis and the pool to Shush. Moreover, Shapur put his name on the city. So, architecture from old Syrians named Epsai choose to build the new city.

The city of Beshapoor designed by the Greek engineering method developed by Hypodamus on a rectangular land in such a way that four gates and two streets cut each other off. In addition, one of the streets is north to south and the other is east to west, each leading to one of the city’s gates. The western gate has been the main entrance to the city. 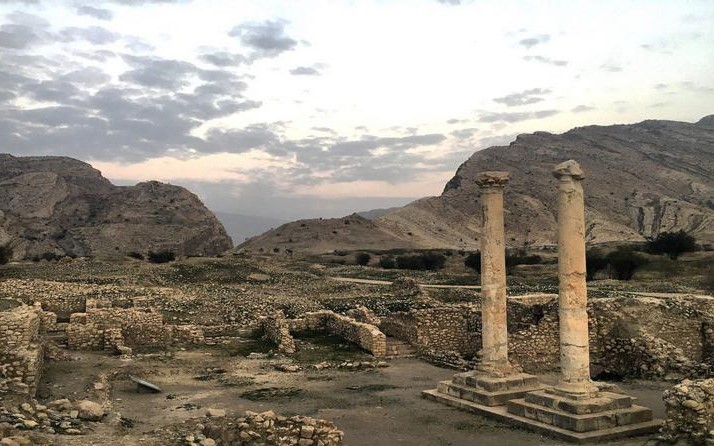 Between 1930 and 1935, Georges of the year and Roman Girshman, representatives of the Louvre museum, explored archaeology in this historic city. Also, they called the building of Rafi’i and four handsets, built with “double glazed” stones, a fire station, and introduced a huge, covered hall called a private palace and another place called the place of the offerings and an ornate porch to the world of archaeology and history. The excavations did not continue and were halted for 30 years.

Finally, the General Directorate of Archaeology and FolkLore decided to dispatch an Iranian archaeological group to the prestige of Dr. Sarfaraz to begin excavations in Bishapoor in order to clarify how past excavations and the appearance of the city’s skeletons appeared.

So, in February 1969, the archaeological delegation established in Shapur and began its work. Also, the operation lasted about 10 years, with the efforts of the archaeological board, the city’s tower and baroe, the Anahita Temple, the Shapur Palace, the Islamic Period Mosque, memorial columns and some other valuable artifacts. Besides, the group’s operations halted in 1978.

Furthermore, again, in February 1997, the city’s drilling operations began with Dr. Sarfaraz’s prestige, but it stopped in May 1997. After that, several excavation seasons carried out by Mr. Mehryar and Norouzi, and since 2003, Amiri has appointed as the head of Bishapoor project.

On September 15, 1931, the historic city of Bishapoor was registered in the National Heritage List of Iran with the number 24.

The Fars Province Roads and Transportation Department intended to widen the Shahpour-Nurabad Mamasani road, which makes the historic city of Bishapoor in half. So, but with the objection of the Cultural Heritage Organization, heavy vehicles were eventually banned from the site and any road construction operations were subject to the opinion of the Cultural Heritage and Tourism Organization.

Moreover, after years of archaeological excavations in Bishapoor, many of the buildings of that time collapsed and its architectural ruins remained buried under the collapsed rubble of the buildings. So, it is less possible to see the city’s image that day and perplexed by the general board of semi-buildings on its feet. Besides, the Bishapoor City Palace established at the entrance of the city through the East Gate in a host of architectural constructions that were desirable for the cities of the Roman emperors.

The theme of embossed roles has always appeared and spread on a free and idealistic level. Also, in a way that this historical prose never contains theological elomics that represent the effects or perspectives in which victories have been achieved.

Moreover, between the five topics of five prominent roles, Shapur is a kind of parallel and consistency that includes scenes that represent a kind of actions. Besides, the scattering of these scenes is in areas that are sometimes very far from each other, but this remoteness does not create a variety of states in individuals and scenes, such as those of Philip the Arabs. 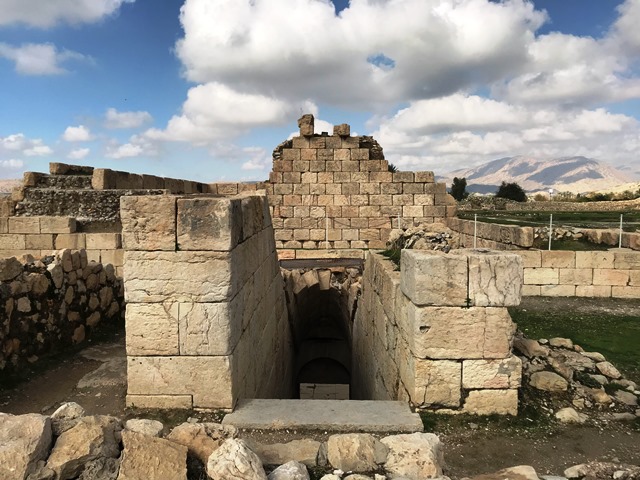 Next to the Shapur Palace in the Bishapoor Valley, there is a large quadrupedal room called the Temple of Anahita Bishapoor. Also, the temple is a cube with a side of nearly 14 meters and is made of carved stones without mortar and double glazing and is in the style of Achaemenid architecture, connected by iron clamps.

Besides, the temple located in a trough 6 meters from the ground and a staircase of the palace attached to it. In addition, the temple lacks roofs, and the aim was to get the water from the Shapur River, which flows 250 meters away, into the temple to be removed by qanat after flowing into the temple.

The ancient area of Bishapoor consists of three main parts:

Furthermore, other works such as Castle Girl, Qal’eh-e-Son and Tang Polo roles are noted in this area.

Some of the remnants of the ancient city of Bishapoor are as follows:

The king’s horse is a large animal that stands heavily on its four feet. Unlike other shapury highlights, Darabgard’s prominent role is the only prominent role that shows the animal while lying on its two front feet flat and straight on the ground. Also, elsewhere, the rule is that one of the front legs lifted from the ground. The horse is also a kakel.

Moreover, the loss of the Dynasty of Suraa for a third of a century resulted in a deep turmoil in the Roman Empire, which weakened by a military coup d’etat, with the unfortunate wars of the Persians and The Berbers, as well as the outbreak of the plague.

In addition, in 239 Hetra, the city of Qala found by the Persians, and sources do not agree to attribute this victory to Ardeshir or Shapur, which is understandable because both of them were partners in the power of the monarchy.