Did you make your decision and chose Iran as your travel destination? We want to tell you to about Bam citadel Kerman for traveling to iran. Travel to Iran with us to get to know about it. Are you interested in experiencing that? what do you know about Iran destination tour one of the most famous Iran travel agency in shiraz and also Iran? This is great and you can be sure that the most exciting experiences will be waiting for you. In this article, we introduce all the requirements to travel to Iran. Also, the do and don’ts of traveling to Iran. Also, we answer this question: how to travel to Iran. visit Iran

Bam Citadel and its Cultural Landscape, which was the largest clay building in the world which is located in Bam, a small city in Kerman Province. It registered as UNESCO World Heritage Site which includes Bam and its Cultural Landscape. The great Bam citadel Kerman dates back to the Achaemenid Empire on the Silk Road. Also, the importance of the citadel was from the seventh to eleventh centuries, when it was the important trade route and famous for the production of silk and cotton.

Bam situated in a desert environment on the southern edge of the Iranian high plateau. Bam lies 1,060 metres above sea level in the center of the valley dominated to the north by the Kafut Mountains and to the south by the Jebal-e Barez Mountains. This valley forms the wider cultural landscape of the Bam County.

Also, Bam is located in an oasis area, the existence of which has been based on the use of underground water canals, qanāts, and has preserved evidence of the technological development in the building and maintenance of the qanāts over more than two millennia. In addition ,Bam had a strategic location on the Silk Roads connecting it to Central Asia in the east, the Persian Gulf in the south, as well as Egypt in the west and it is an example of the interaction of the various influences.

The origins of the citadel of Bam, Arg-e Bam,  traced back to the Achaemenid period (6th to 4th centuries BC) and even beyond. The heyday of the citadel was from the 7th to 11th centuries, being at the crossroads of important trade routes and known for the production of silk and cotton garments. The citadel, which contains the governor’s quarters and the fortified residential area, forms the central focus of a vast cultural landscape, which marked by a series of forts and citadels, now in ruins.

Moreover, the existence of life in the oasis based on the underground irrigation canals. Also, the qanāts, of which Bam has preserved some of the earliest evidence in Iran. Arg-e Bam the most representative example of a fortified medieval town built in vernacular technique using mud layers (Chineh), sun-dried mud bricks (khesht), and vaulted and domed structures. Outside the core area of Arg-e Bam, other protected historic structures which include Qal’eh Dokhtar (Maiden’s fortress, ca. 7th century), Emamzadeh Zeyd Mausoleum (11-12th century), and Emamzadeh Asiri Mausoleum (12th century and historic qanāt systems and cultivations southeast of the Arg.

Some of the citadel’s features such as its establishment on a platform combining a natural hilltop and a manmade terrace have been compared by archaeologists to the Achaemenian model of Persepolis. During the Parthian rule, the fort was expanded and became Arg-e-Bam, the Citadel of Bam.

Also, a comparative study titled “Bam and a Brief History of Urban Settlement and Planning in Iran” concluded that the essential core of the city of Bam and the Governor’s section built during the Parthian era. Under the Sassanids, the castle was seized by Ardeshir Babakan. New fortifications and walls  constructed between 224 and 637 AD.

Its heyday from the 7th to 11th centuries, being at the crossroads of important trade routes and known for the production of silk and cotton garments. The existence of life in the oasis was based on the underground irrigation canals, the qanāts, of which Bam has preserved some of the 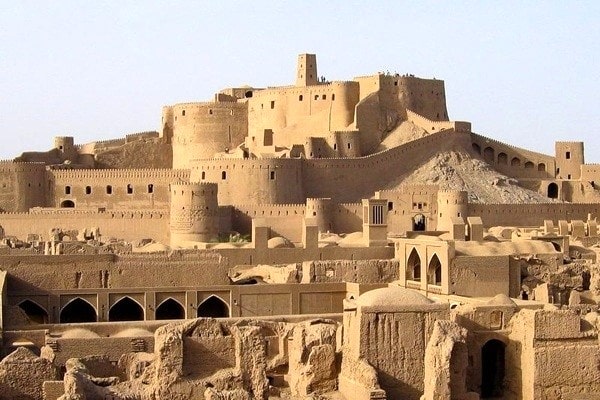 Actually, the general building contains a large castle and the citadel. Also, because of the affective look of the citadel, the entire fortress named the Bam Citadel. Besides, because of earthquake on December 26, 2003, this Citadel destroyed completely.

Furthermore ,the extremely destructive quake killed about 26,200, injured thousands and left more than 75,000 homeless. Besides, approximately 70% of the buildings  destroyed. Also,the earthquake was wrenching because its hypocenter was located just below the city of Bam, around 7 km deep. Several days after the earthquake, Mohammad Khatami, the President of Iran, announced that the Citadel rebuilt.

The Architectural form of Bam Citadel

The planning and architecture of the citadel  thought out from different points of view. From the citadel one can see that the planner(s) had foreseen the entire final form of the building. Besides, the city from the first steps in the planning process. In addition, during each phase of building development the already-built part enjoyed a complete figure. Also, each additional part could  “sewn” into the existing section seamlessly.

There are two different distinguishable parts in the architectural form of Bam Citadel:

• The rulers’ part which has the most internal wall that was holding the citadel, mill, barracks, 4-season house, water-well, and a stable for 200 horses.
• There is a bazaar alongside the North to South, and the ruled-over part surrounding the rulers’ place, consisting of the main entrance of the entire fortress-city and the bazaar too.
Three different types are recognizable, among the houses: 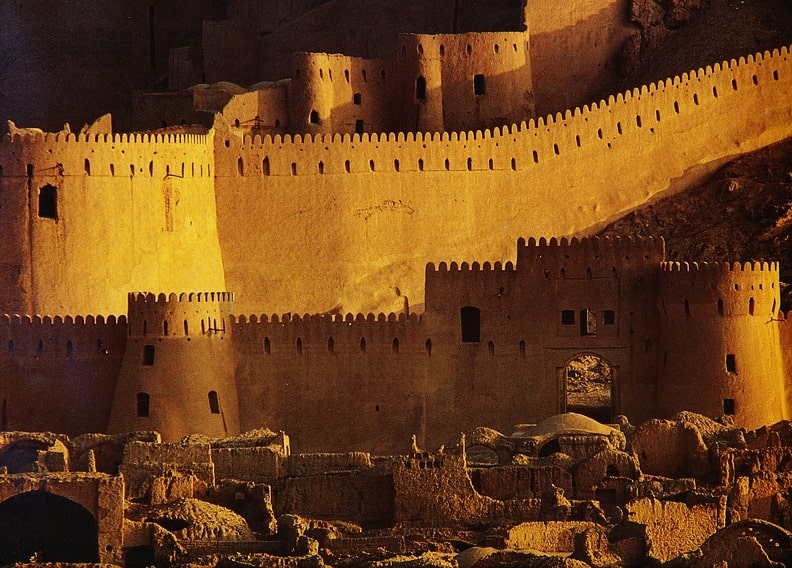 Description of the Bam citadel

The citadel consists of four main sections: a residential zone, the stables, the army barracks and the governor’s residence. Arg-e-Bam had 38 watchtowers, four entrance gates and the outer defense wall is surrounded by a moat. The Government Quarters are on a rocky hill, protected by a double fortification wall. The most notable structures are the bazaar, the Congregational Mosque, the Mirza Na’im ensemble and the Mir House

Bam and its Cultural Landscape represents an outstanding example of an ancient fortified settlement. Besides, it developed around the Iranian central plateau. Also, it is an exceptional testimony to the development of a trading settlement in the desert . Moreover, this impressive construction undoubtedly represents the climax. Besides, it is the most important achievement of its type not only in the area of Bam. Also, in a much wider cultural region of Western Asia.

Larger than nearby Rayen Castle, the area of Bam Citadel is approximately 180,000 square meters (44 acres), and it is surrounded by gigantic walls 6–7 metres (20–23 ft) high and 1,815 metres (5,955 ft) long. The citadel features two of the “stay-awake towers” for which Bam is famed. Also, there are as many as 67 such towers scattered across the ancient city of Bam.

You can visit this place through  Iran tour , named as Tour Around Iran, offered by Iran Destination, Iran Travel Agent. Iran Destination is a well-known Iran Tour Operator which makes you the best trip to Iran. So before you travel to Iran, make sure you visit our Iran Tour Packages. Please feel free to contact us regarding any issue. Our Iran Travel Agency is ready to help you by any means.