Azadi Tower (Freedom Tower) formerly known as the Shahyad Tower that located at Azadi Square, in Tehran City, Iran is like a standing soldier that built in 1971 and consists of 8000 white marble blocks which was calculated by computer and located by Ghanbar Rahimi who was known as King of Stone. Hossein Amanat was its architect who won a competition to design the Azadi Tower .A mixture of both Sassanid and Islamic architectural styles used to build this tower; the 50 foot high tower reminds the Powerful Empire of Iran. This amazing structure is an association between modern and ancient cultures of Iran. Freedom Tower is one of the symbols of Tehran. 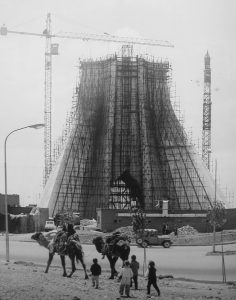 Experience the top of Azadi Tower

You can experience the top of Azadi Tower by stairs or elevator.You can visit Tehran. There is museum that displays many ancient cuneiform tablets, ceramics, and pottery, as well as a replica of the Cyrus Cylinder. It’s not good going inside to see the complex structural engineering that forms the bones of the design and for the view from the gallery at the top. The Freedom Tower consists of 4 bases which have 2 elevators and 2 staircases. Original elliptical arc in east – west view of the tower like Ivan Madaen (Kasra Arch) is a symbol of Sassanid era and the twill -shaped arch above it and Kārbandi between the two arches with turquoise tile and peacock feather pattern are the main symbol of the Islamic period architecture.

At the base are galleries with changing exhibitions and a cafe. 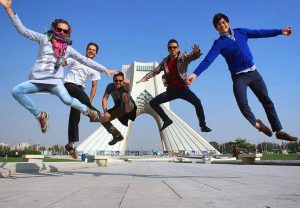 To visit the tower of Freedom this is located in a big park. You will encounter with traffic which is an inseparable feature of this square.

Freedom Square was the area of much protest in Iran revolution and it is place for demonstrations today too. 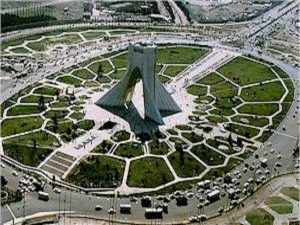 Travelers who fly domestically will see a bird’s-eye view of this tower before landing at Mehrabad Airport of Tehran.

All of these features make this Tower a favorite destination of Iran for tourists. 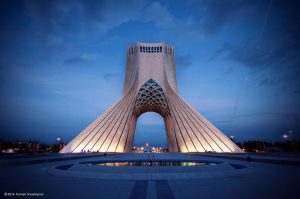