Asbads (windmill) of Iran are among the oldest in the world. Located in the Iranian town of Nashtifan, initially named Nish Toofan, or “storm’s sting,” the windmills have withstood winds of up to 74 miles an hour. With the design thought to have been created in eastern Persia between 500-900 A.D., they have been in use for several centuries.

Strong northern winds (Shamal) blow throughout the year in the eastern parts of Iran (Sistan and Baluchistan, Southern Khorasan and southern parts of Razavi Provinces).

Though this natural phenomenon is more prevalent all over the country during autumn, and in winter, winds may keep blowing, but the eastern parts of Iran are an exception in that even when there is no wind in other parts of Iran during spring and summer, these parts are affected by winds known as “120 days winds / black winds” the speed of which sometimes gets to 100 km/hour.

The endless wind almost all over the year along with the scarcity of water. It Usually resources from two factors which encouraged our ancestors to make an efficient use of this natural energy, as a result of which windmills locally called “Asbad” were invented.

Asbad is one of the most significant architectural structures of Iran in its desert regions which converts kinetic energy of air (wind) into other forms of energy.

Asbad is a smart technique to grind grains, a technique which goes back to ancient times when the people living in the eastern parts of Iran in an attempt to adapt themselves with the nature and transform environmental obstacles into opportunities managed to invent it.

Iranian architects’ smart utilization of a natural threat i.e. strong and annoying winds and rendering it to an exceptional opportunity for the production of a strategic product like bread is not short of a miracle.

As a result of abundant and free of charge energy of wind in parts of the eastern region of Iran, one can see 40 windmills built side by side without any worry that energy may one day run out.

During the 120 days winds period, winds pass through the wind catcher openings and rotate the wheels and vanes, the heavy weight of the milling machinery and wheel is exerted on the axis and rotates the millstones.

The windmills designed in such a way that winds encounter no obstacle to reach them. So, as a result of this concern, windmills built on high elevations.

To make the optimal use of the wind, all the uniform windmills of a village or town used to concentrated at a single location on the highest spot of that area.

Another reason for this strategy related to the fact that since all the windmills were built as a complex plant in a single area which sometimes stretched over an area of 1 km wide, it acted as a barrier against the annoying storms for the nearby villages / towns.

The two story windmills designed horizontally had vertical axis and the wood, mud and brick were the main construction materials. 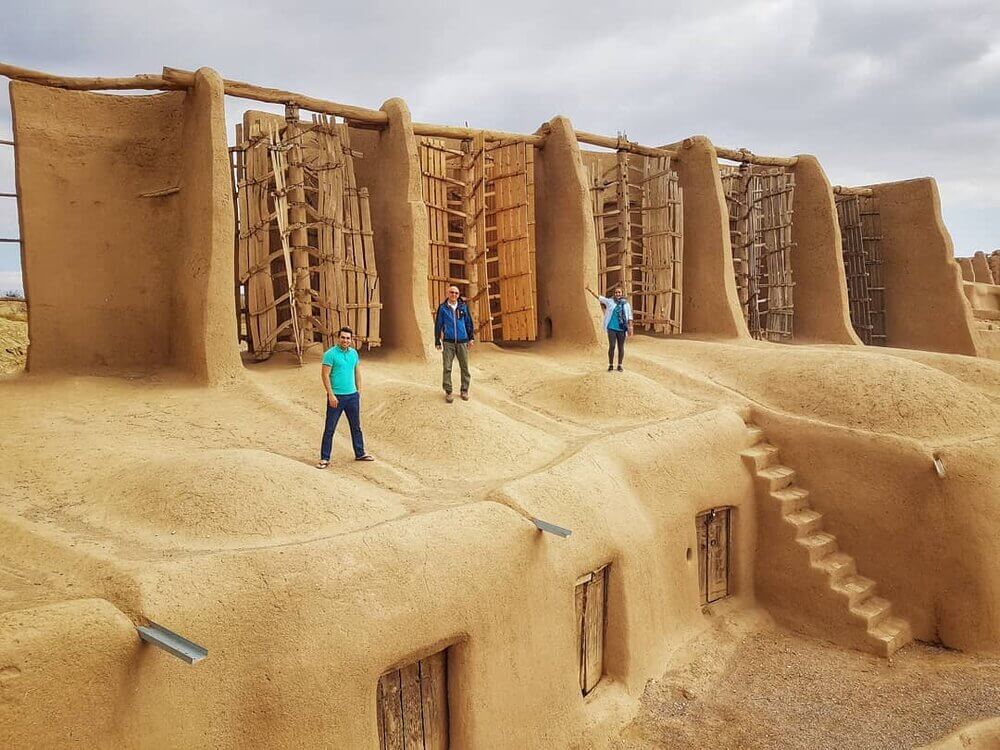 Nashtifan Asbad or windmills in Khaf is one of the biggest adobe, mud and wooden complex from Safavid era and also the biggest and the oldest world’s Asbad complex.

Most of historians determine its genesis. It was before the Muslim conquest of Iran and the others recognize it about 1700 years before Christ birth.

Asbad development in Nashtifan was due to strong and continuous 120-day Sistan winds.

Asbad moves the wooden blades by winds blowing. It would have been the cause of mill stones transmission and wheat flour.

There is a primary device which working based on leverage. Such as, in holes under rocks in the interior space of the Asbad which can stop it when necessary. The lack of wind and the constant lack of it at all times of the year had been a major problem in the use of Asbads. Asbad had an important role in the livelihoods and lives of the people in this region.

These amazing windmills are among the oldest in the world. Located in the Iranian town of Nashtifan, initially named Nish Toofan, or “storm’s sting”. The windmills have withstood winds of up to 74 miles an hour. With the design thought to create in eastern Persia between 500-900 A.D., they have been in use for several centuries.

Made from clay, straw, and wood, the windmills stand up to 65 feet in height with grinding stones in a room below for pressing grain into flour. And while there are about thirty similar mills around the area. For Example, Iran’s Cultural Heritage Department in 2002 registered the windmills of Nashtifan as a national heritage site.

It might seem incredible to anyone to go and visit an ancient country for reasons other than touching old monuments. Iran is full of wonders that everyone comes to, due to specific reasons. Additional to its nature, history, and civilization, one might be amazed by how Iranians were managed to live. Also, earn a living in dry regions centuries ago when there was no idea of modern windmills or air conditioners.

For centuries, in Iran, all buildings built according to the climate and environmental conditions. The sun, wind, humidity, cold and heat, and in general the weather and geographical conditions, have had a direct impact on the traditional architecture of Iran in different regions. It is not surprising that using wind energy goes back to ancient Iran. However, in different ways as local people always interested in nature and its wonders.

As a natural wonder, wind energy was first used by the Iranians in the construction of windmills in 200 BC. Iranians were able to use a force to bring water from their wells to the surface of the fields.  The idea of using these windmills  transferred to Europe. Then to the Americas in the 12th and 13th centuries, and has been used there for many years. Examples of these mills are still available in Nashtifan, Khaf (Khorasan Razavi Province) which are currently in use.

Many sources state that in the eastern provinces of Iran, windmills used to raise water from wells and grind grains. Observations and research show that in summer and sometimes in the autumn in most arid and water-less regions of Iran. It naturally need more water, the intensity of wind has been an important factor in the use of wind energy.

Iran tourism is very attractive for tourists from different parts of the world. These trips are held in the form of the 10 best Iran tours & trips 2021/2022 to several destinations in one region Iran Holidays. Also, sometimes tours from the north to the south of Iran. Iran tours are very attractive due to the conditions of the event. If you are planning to visit Iran, be sure to participate in these tours. Of course, Nowruz tours in Iran are much more diverse. Also, you can take full advantage of the Nowruz holiday for Iran tours.