Ali Qapu Palace in Naghsh-e Jahan Square in Isfahan is one of the most beautiful architectural examples of the Safavid era. Besides, Ali Qapu Mansion attracts the attention of many domestic. Also, foreign tourists with outstanding architecture. Moreover, remarkable decorations from prominent Iranian artists.

Moreover, on a trip to Isfahan and visiting one of isfahan’s most prominent landmarks, Naghsh-e Jahan Square, be sure to visit the Ali Qapu Palace. Also, to learn about the building of the palace and different parts of Ali qapu mansion, get along with us. So, in this article, we introduce The Ali Qapu Palace of Isfahan and its various parts.

In addition, the word “Ali Qapu” composed of two excellent parts. Also, which together mean “long door” or “head on the long door”. Besides, Ali Qapu Palace was one of the largest and most magnificent buildings of its time. Also, it built in the early 11th century AH.

The building dates back to the Safavid era in Iran and in their capital of command in Isfahan. Also, it built around 1054 AH and between 971 and 977 AH, on the orders of Shah Abbas I, who was one of the most powerful kings of Iran. Besides, although the complete completion of the finest and decorations of the Ali Qapu Mansion took place after the death of Shah Abbas I.

Moreover, the complete construction of the building of Ali Qapu Palace  took place during the kingdom of Shah Abbas I, Shah Abbas II and Shah Sultan Hussein. Besides, this interval, which has taken place intermittently in the construction process, has taken nearly 100 years. Also, the foundation of the building is mostly in the time of Shah Abbas I and II. Furthermore, its restoration and decoration date back to the reign of Shah Sultan Hussein.

Moreover, Naghsh-e Jahan Square surrounded by Hafez streets on the east and Sepah Street on the west side. Moreover, both of these streets have access to the square. Besides, if you want to visit Ali Qapu Mansion, you can take your square to Sepah or Saadi streets from The Governor’s Street in the west of the square. So, if you are driving a private vehicle, Sepah Street is a good option for you because you have parking.

In addition, keep in mind that the area where Naghsh-e Jahan Square located is one of the busiest and crowded areas of Isfahan city. Also, parking capacity may be complete early on holidays and busy days. Therefore, it is better not to adjourn visiting the Ali Qapu Mansion and other sights of Naghsh-e Jahan Square to the final hours of the day.

Visiting time: All weekdays from 9 am to 6 pm 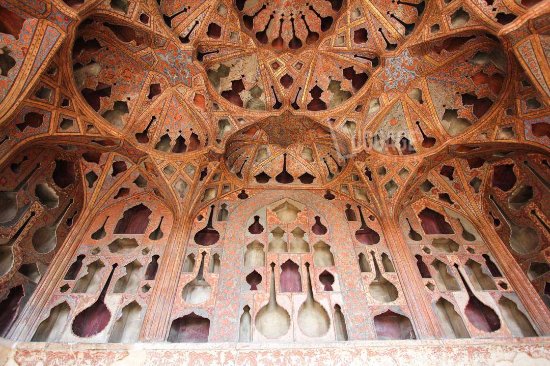 Ali Qapu Mansion known as an example of buildings with unique architecture in the Safavid era. Also, the construction of the palace and head carried out at the entrance of Ali Qapu during the reign of Shah Abbas I, Shah Abbas II and Shah Sultan Hussein. Besides, the entrance gate is a remarkable part of the architecture of the Ali Qapu building. Moreover, at the top of the entrance, there is an inscription that parts of it are missing today.

In addition, Ali Qapu Mansion is a 6-storey building about 48 meters high. Also, in this building, different floors connected by three staircases. Besides, on the first floor of ali qapu mansion, there are two main halls that were the place for administrative affairs during the Safavid era. So, in the past, this episode called “Sadr House” or “The House’s Esak.”

In addition, other beautiful buildings in this square include the head in Caesarea . Also, this head-on is a way to the traditional bazaar of Isfahan and it is very enjoyable to visit its old shops.

Furthermore, the most important historical monument left by the Safavids in Naghsh-e Jahan Square is the Shah’s Mosque. Also, this mosque is one of the most prominent architectural examples in the Safavid era. Besides, Shah Mosque built on the orders of Shah Abbas Safavi and by prominent Iranian artists such as Ali Akbar Esfahani and Alireza Abbasi.

Iran Destination is a an Iran Tour Operator which makes you the best travel to Iran. You can visit this place through the following Iran tourism  packages offered by Iran Destination, Iran travel agency: