Yazd Jame Mosque is one of the most beautiful, unique and important tourist attractions of Iran. Also, it built in the 6th century AH and the restoration and reconstruction of its various places has continued until the last decade.

In addition, when the builders of The Yazd Jame Mosque decided to build such a building, they built it in the center of the old city of Yazd and inside the fence. Also, the area that builds the building of this mosque is 9800 square meters. Moreover, an area of about 500 square meters, parts related to tiles, writings, etc. Besides, the length of Yazd Jame Mosque consists of 104 meters. Furthermore, its width is 99 meters, which leads to seven entrances connected to several exit alleys and roads. 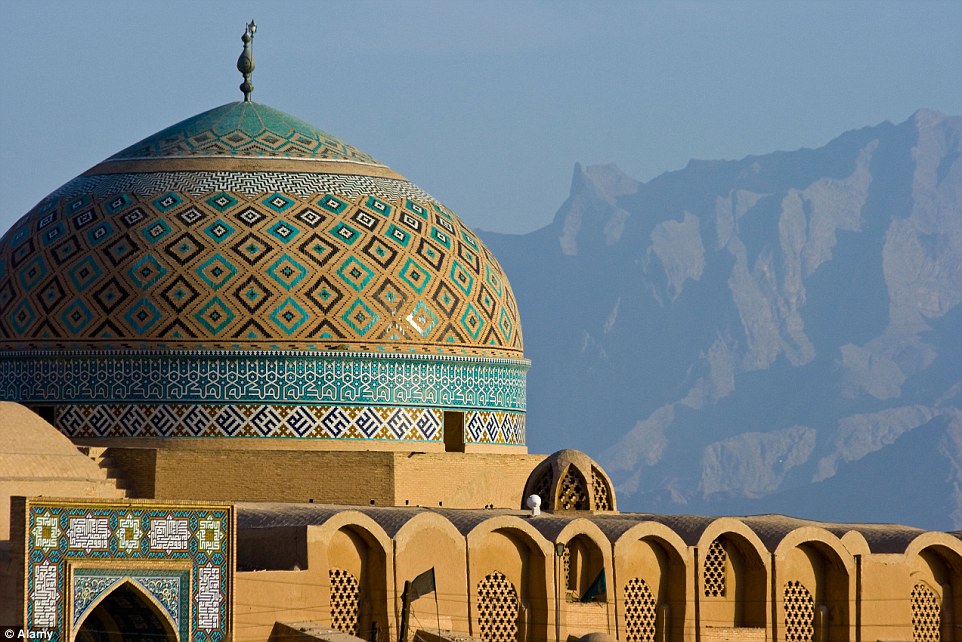 Yazd Jame Mosque located on the western side of Imam Khomeini Street and one of the old neighborhoods of the city. Besides, Chaharsoq and Shahi Bazaar of Yazd are other historical monuments of the 8th century AH. In addition, at the end of The Grand Mosque Street and on the southeast side of it. Also, the end of the three old bazaars in Yazd city is connected to ChaharSoq. One of these bazaars leads to the Grand Mosque, which connects the other two bazaars to the Jewish alley and dar al-Shefa neighborhood, providing an ancient and astounding collection for visitors.

According to the documents that have remained from the past, the construction and completion of the Yazd Jame Mosque has carried out over a century and in various historical periods. Besides, the most important of which is the ilkhanid monarchy, the Safavids, the Timurid government, the rule of al-Muzaffar and the Qajars. In addition, each part of the monument has built and refurbished over time by numerous banians.

Furthermore, Bonnie’s first seems to be this astounding work, Amr Leith Saffari. Also, the most famous bonnie to make it is Ala al-Dawlah Kalnjar, who served as the ruler of Yazd from 474 to 498 AH. Besides, after Kalanjar’s death, new sections will add to the main building of the Yazd Jame Mosque with the efforts of the daughters of Faramarz b. Ali.

Unfortunately, from the old parts of the mosque, there is no work left. Also, what now seen as the building of the Yazd Jame Mosque, with the efforts of a number of officials, religious and country scholars of different times, has renovated and built.

In the eastern entrance of the building, an inscription of tiles in which the text of the endowment of the Yazd Jame Mosque is 765 AH. Besides, this is the oldest recorded date in the building. Moreover, other tablets are stone and tile inscriptions of this hasty on 770, 777, 820, 863, 875 and 947 AH.

Moreover, in the 5th/10th century, when Ala al-Dawlah was one of the people of Yazd time. Also, he built the second mosque, known as the Old Grand Mosque. Also, he added more buildings to the primary mosque by building a dome of houses and several porches. Besides, after him, Faramarz b. Kakoo’i’s daughters provided the construction of new sections, including a shrine and tomb next to the second mosque.

Furthermore, every viewer visiting this historic mosque will wipe out by the unique Iranian architecture used in the construction of shabestan, dome, tiling, minarets, courtyards and plasterwork. Also, located in the dome of the dome of Yazd Jame Mosque and actually considered as the main altar. Besides, mehrabi decorated by inscriptions, bricks and mosaic tiles and presents a manifestation of Iranian art and taste to the world. 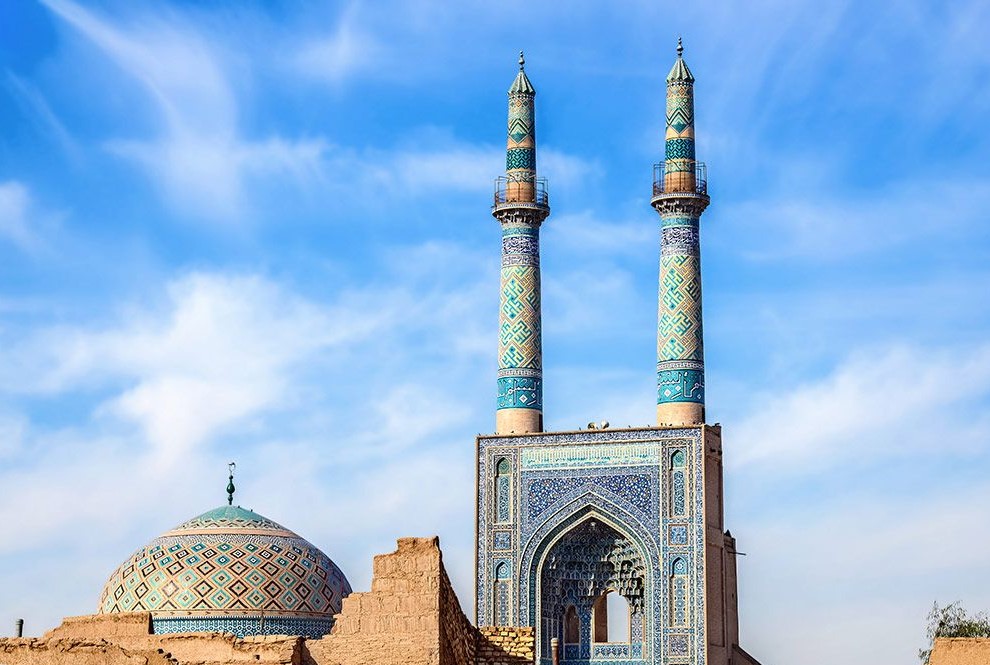 The Yazd Jame Mosque is one of the most extraordinary monuments that has attracted many enthusiasts around the world. Also, this amazing monument consists of a high porch, two naves, two warm houses located on the eastern and western sides of the naves, a dome, and two footprints. Besides, a large rectangular courtyard that represents the architecture and design of the interesting and beautiful construction of ancient Persia. Furthermore, six entrances are intended to enter the grand mosque, each of which located in different parts of the mosque.

In addition, during the Qajar era and during the reign of Fath’Ali Shah Qajar, extensive demolition operations carried out to rebuild the monument. Besides, creating a completely different appearance from the original Yazd Jame Mosque. Besides, a mosque that today is a tourist destination for many people from all over the world. Also, as well as the venue for worship and religious ceremonies of the people of Yazd, has built in place of three mosques that have built together in the past years.

Dome of the Mosque

The dome of the mosque, composed of two connected shells. Also, with a beautiful design of soapy flowers, with an ornate stem called Al-Mulk Allah. Also, repeated in kufic line, as one of the world’s most distinguished and unique architectural works. Besides, the dome, porch and surrounding places considered as one of the most beautiful parts of The Yazd Jame Mosque.

The extraordinarily beautiful mosaic tiling, porcelain knots and Arabesque. Also, plant roles that show off on the elevated porch of this huge monument have created a unique view for it.

In addition, the minarets in the mosque were probably Aqa Jamal al-Din Muhammad, known as “Mehter jamal”. Moreover, the minister of Yazd during the Safavid Shah Tahmasp era. Besides, the height of the minarets of Yazd Jame Mosque are about  more than 52 meters and a diameter of 8 meters.

Moreover, it has won the tallest minaret among historical mosques, which unfortunately collapsed in 1934 and refurbished. Also, in fact, the decorations used in the architecture of the mosque considered one of the most stunning masterpieces in human history. Besides , it admired and admired by foreign and domestic visitors.