Iran Destination is a well-operated tour operator in Iran which makes your travel to Iran easy. We suggest you to have a look on our  Iran packages tour.  Our Iran Travel Agency is ready to help you to travel to Iran. Following, while trip to Iran, read about Vakil Mosque; The Art of Zand Dynasty.

The Background of Vakil Mosque

The Vakil Mosque of Shiraz with a beautiful and old building is one of the most well-known places in Shiraz. And  located in the western part of the lawyer’s market. The construction of the mosque took place during the reign of zandiyeh and at the hands of karimkhan Zand. With a dubstep design, Vakil Mosque consists of two Southern and eastern nave, both of which have stunning architecture. The southern nave of Vakil Mosque covers about five thousand square meters and, by creating a different space, consists of 48 monolithic and spiral stone columns. Also, the pulpit in this nave has 14 marble stairs, which was brought to Shiraz by order of Karim Khan to make the pulpit from Maragheh city.

Vakiloraaya has always been one of the honors of Shiraz. The king of the zandiyeh dynasty, who at the time of his authoritative but fair rule, tried to be a lawyer of ordinary people and did not leave himself to the public except good. The lawyer’s collection is one of the symbols that Karim Khan Zand has left in his capital. The construction of this complex, which was done simultaneously, has been completed in 1187 ah. In the Qajar period, Hussein Ali Mirza farmanfarma, one of the Sons of Fathali Shah, has refurbished the mosque. After that, some of the mosque’s tiling and floors have been restored by the Bureau of protection of Antiquities. Vakil Mosque was registered on July 182, 1311 in the list of national monuments of Iran. 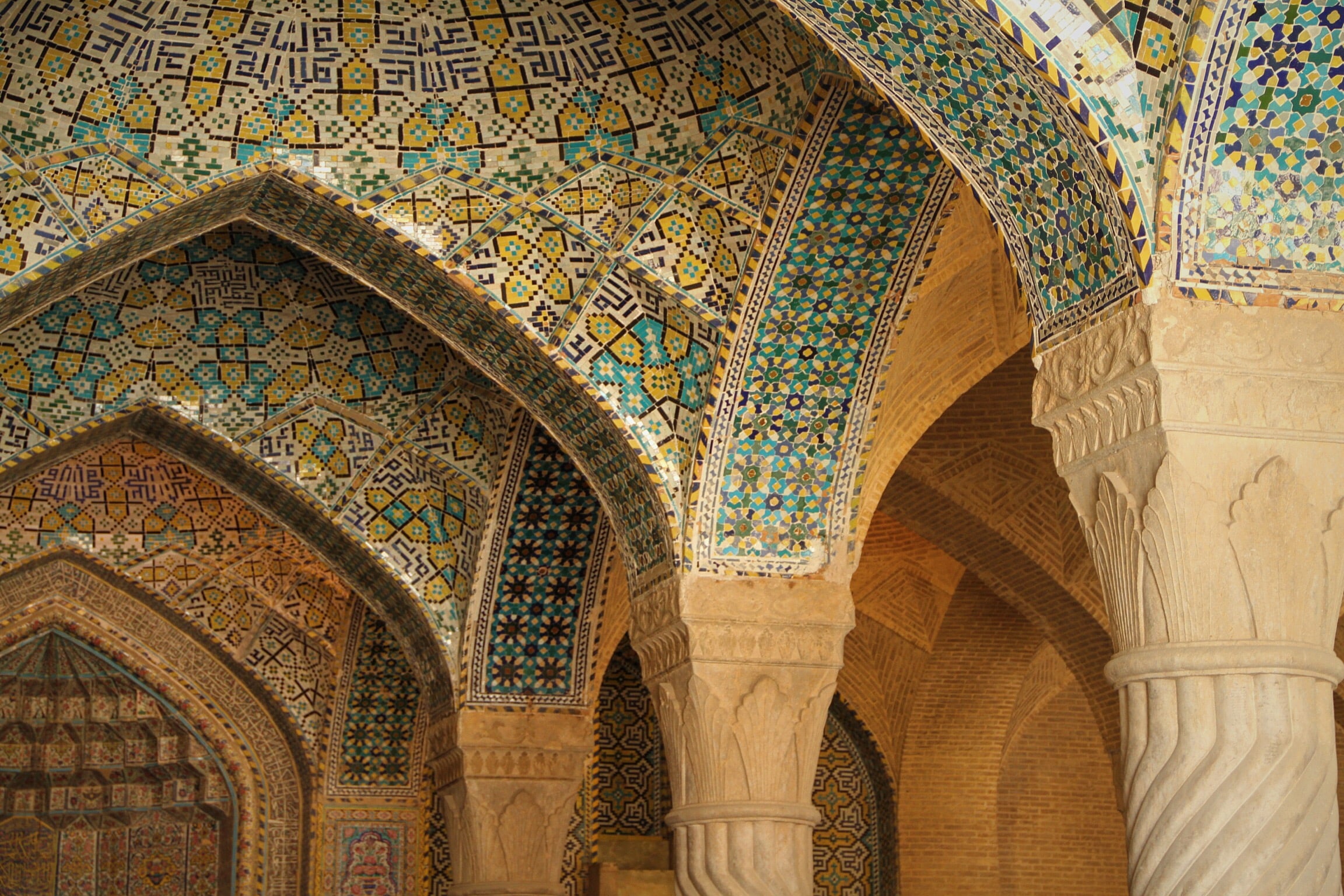 Consequently, Karim Khan Zand himself personally supervised the construction of a lawyer to make sure everything is done in the best way. They say that Karim Khan had a special interest in architecture and designed most of the buildings that he ordered to build. The Vakil Mosque is also a symbol of the view of Vakil Al-raayya towards man. Because the mosque, despite its countless beauty, has a very proportional and simple design. The lack of domes and minarets in this building represents the same simplicity because in its architecture the era of the construction of beautiful and magnificent domes has flourished.

Above all, It seems that the proportions of different parts of the mosque, just like the proportions of different organs of human beings, should be proportional. Another point is that this work has simply removed the mosque from luxury and extremes. As if Karim Khan had a Treasury full of Indian spoils, but he wanted to spend it improving the conditions of public life, not building a very luxurious mosque called Karim Khan Zand to keep alive.

The brick texture of the building and the presence of springs in the courtyard. It equally enhance the spirit of intimacy and folklore. It seems that a measure of springs symbolizes all of them being human beings together and being equal to the value of everyone from the king to the peasants together. What Karim Khan Zand believed in was special and acted on his own belief.

Also, They say that Karimkhan in the construction of the mosque, than his glory, erected on the place, leaving traces of his thinks, to the comfort and ease of use, people thought of it was performed. As the construction of faster and better loo is more important than mosque tiling and decorating. As Muhammad Ibrahim ancient parizi quotes in his book: “once Mirza Jafar the minister said to him( Karim Khan): Khan! The best artists, painters, etc. the architects of the flock that if the name of the Khan. It built to be stay in effect, and administration, and our art will be, not the workers, second-hand, thick, work.

On the other hand, built such a great mosque, and the beauty, only two years to the length of the plunge is something that shows the importance of giving Karimkhan to perform timely and correct state of affairs, and less cost has been. The same simplicity and intimacy that has added to the beauty of the mosque.

Architecture of Vakil Mosque in Shiraz, magnificent and eye-catching

Vakil Mosque in Shiraz has an area of 11 thousand square meters. The building of the mosque is eight thousand 860 square meters and includes nave, courtyard and beautiful porches of the mosque. Moreover, This two-Ivan mosque is designed so that in addition to its extraordinary beauty and magnificence. It has a certain calmness and comfort and people feel at it. The mosque built for everyday use by people, alongside the market and harmonizes with the demands of the people.

In such a way that the business who gives up his work for prayer, by entering the mosque, along with enjoying the magnificent beauty such as the Pearl arch and the great nave, also feel safe and comfortable. Decorating this building is truly beautiful and diverse. In every corner and corner, a spectacular picture of the art of tiling, carving, pug and calligraphy brings you to delight. Then we will visit different parts of the mosque together: 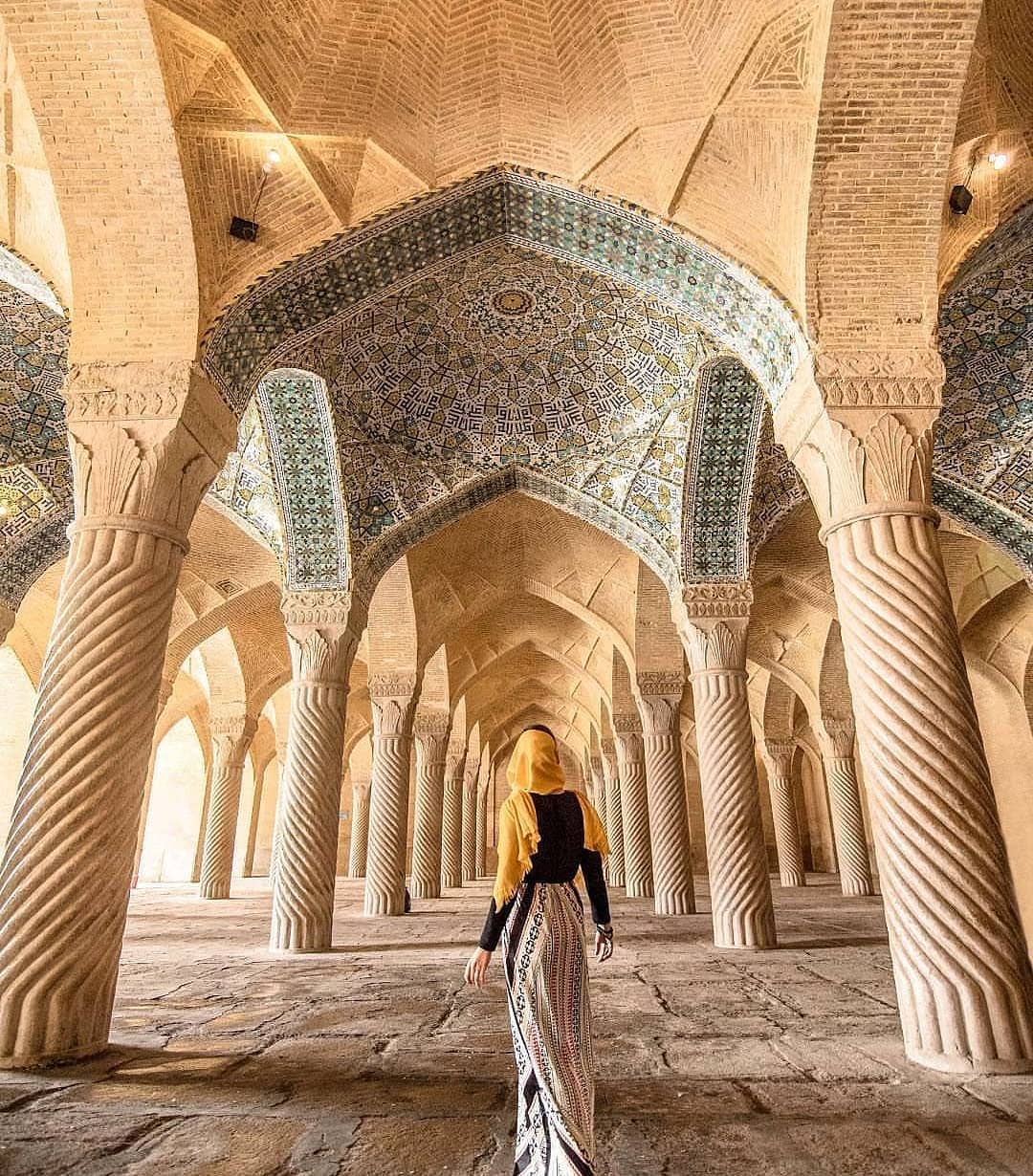 At the entrance of Vakil Mosque in Shiraz

The main entrance of the mosque is very spectacular with first-class tiles and mogharnaskari. In the west of the lawyer’s market, near the right of the swordsmen, you can see the magnificence and dignity of this beautiful entrance. The mosque has several other side entrances from the market and surrounding alleys. The entrance has a beautiful arch decorated with seven-colored tiles of floral and Bush designs.

Also, Two entrances to the mosque with a height of seven meters and a width of 3 meters is awesome. Above seen in the inscription of the Quranic verses with a script written in the history of 1306. Another inscription appears above the head among the delicate tiles of this area. It shows the name of fatholishah and Hussein Ali Mirza with a third line and a gold-plated water. Mogharnaskari and roof tile also represents a paradise of Iranian art before you.

Also, We enter the hashtaghi corridor on the left and right of which the two corridors lead us to the apron of the mosque. Each corridor has a 90 degree angle. One of the strengths of the architecture of this section. the corridors designed so that a person notice a change the angle of the apron is not up to the Qibla of the mosque’s Qibla prayer together, sue them, and also facade of the mosque with the doors of the sub-market consistent.

Northern porch or pearl vault, shining and valuable like pearls

In the north of the courtyard, there is a large and magnificent porch, which called the Pearl vault. The vault is 20 meters high and 20 meters wide and with stunning tiles and beautiful inscriptions, it is very spectacular. Therefore, The Pearl vault has three arcades inside itself. One of the Arch is on its way to the mosque, and the other two constitute a stoic five-meter width. The two finial sides make the porch more beautiful. Just take a look at this beautiful porch and its seven-colored tiles will take you to the dream world of Paradise Gardens.

Subsequently, All ceilings and walls of the vault covered with seven-colored tiles. It exhibit the design of ornamental flowers in the most beautiful form. The interior of the vault and the exterior of the vault with Wheatstone are made of marble plins multiply the beauty of the vault. The inscriptions of this vault are also many spectacular. In one of the inscriptions the name of Fath-Ali Shah Qajar, Qajar. And the name of The Khatat the effect of Mirza Husayn bin Muhammad Sharif, Etcher and year 1243 ah with the line-thirds of the White, on the lands of the tile Azure is written and round the porch is drawn.

Southern porch in front of the Pearl vault

The Southern porch also has a unique beauty with four arcades. Also, The porch, which is opposite the Pearl arch, carved with plinths and tiles of seven colors to emerge its glamorous beauty. Porch wall tiling is with seven-color tiles and the ceiling beautifully decorated with mosaic tiling. There are two inscriptions on this porch, on which the date is 1243 and 1244.