5/5 - (2 votes)
Traditionl clothing in iran is the clothes worn by the natives of an area in Iran. These cloths are usually taken from the customs of each region and according to the resources available in that region. Iran has a large area. So, it has many ethnicities. They have special languages, special traditions and of course their clothes. All of them contribute to the value of the country. If we know these clothes, you can easily identify the traditionl clothing in iran and say which clothes belong to which region. They are each formed over time and for different reasons. Depending on the color, fabric, different patterns, jewelry that has been worked on and of course the type of hijab, you will know which area the clothes are for.

Bakhtiari people live in southwestern Iran in the provinces of Chaharmahal and Bakhtiari, Khuzestan, Isfahan, Kohgiluyeh, Boyer-Ahmad and Lorestan. Their dialect is Bakhtiari. The clothing of the Bakhtiari nomadic tribe depends on relatively diverse climatic conditions. Men have baggy pants that are tight at the ankles. They also have woolen hats and use chogha (a type of men’s overcoat). Colorful and layered skirts with vests are common for women. Women have long scarves that they decorate with handmade designs for their traditional clothing in iran. 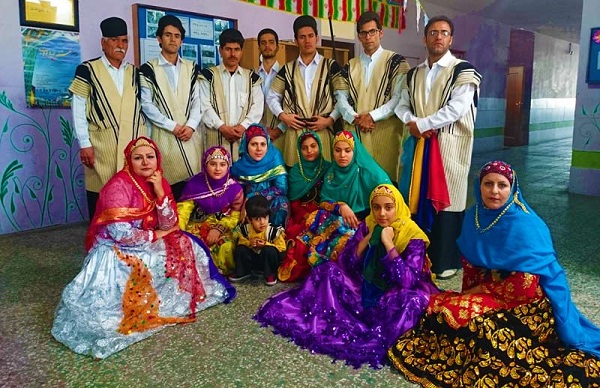 Fars province is the main center of Qashqai life. However, their territory are also in other provinces such as Isfahan, Chaharmahal and Bakhtiari, Kohgoluyeh and Boyer-Ahmad, Markazi, Bushehr, Qom and.. . Qashqai are one of the nomadic turkish tribes. Women are with long, multi-layered, colorful skirts and long scarves that are under their chin. Men wear hats made of sheepskin. These hats belong to the Qashqai tribes. 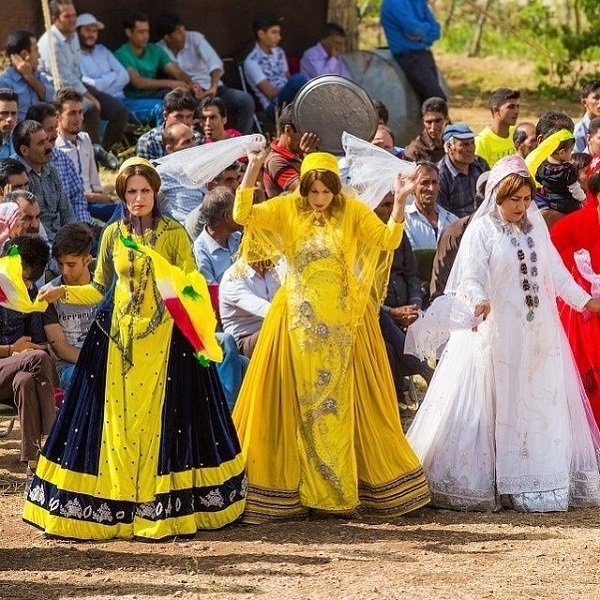 The people of Lor live mostly in the western and southwestern regions of Iran. They have divisions, the most important of which are known as big lor and small lor. Compared to Lor men, who use neutral colors in their clothes, women go for light colors with stripes on their coats. Women wear vests on their shirts. They have a long scarf that covers their shoulders, neck and head. Lori men wear a black felt hat that is completely round and made of high quality felt. Men’s hats are black, light brown, dark brown or white. 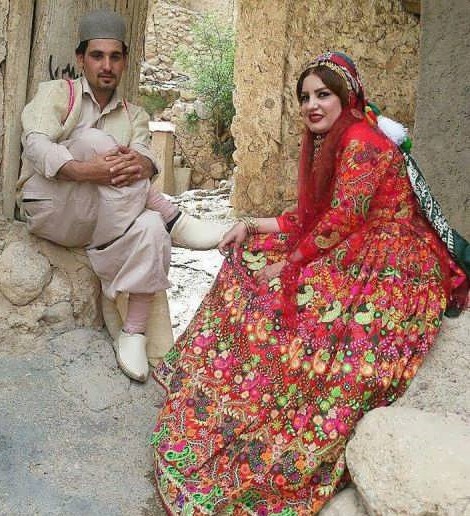 The Baluch people live in southeastern Sistan and Baluchestan, on the Pakistan-Afghanistan border. The traditional costumes of this region are also a bit similar to the usual costumes of neighboring countries. Women are with colorful pants and clothes that are up to the knees. They usually have gold bracelets, necklaces and other jewelry. They also wear long shawls that cover their heads and shoulders. Also, their pants are the same as the clothes. Baloch men’s local dress: long pants, shirts similar to dashdash and turban. Due to the heat of the area, men’s clothing is white. 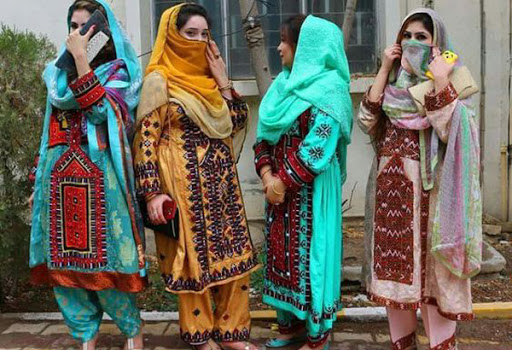 Abyaneh village is located in Kashan. This beautiful village is one of the famous tourist areas. The people of this village, that most of them are elderly, are in this village with their traditional costumes. Women have skirts below the knee. Their famous feature is the long, white and floral scarf that they use in their local clothes. Men wear black pants, colorful vests and woolen hats. 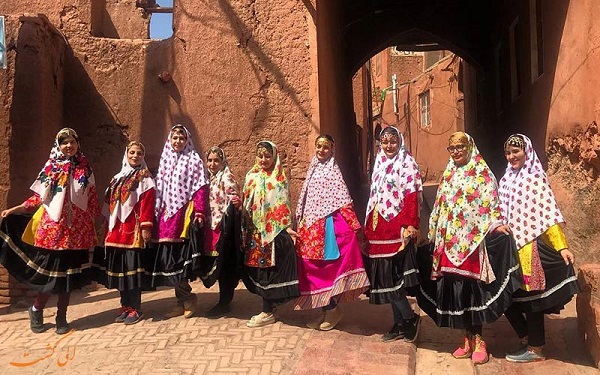 Local clothes of the people of Gilan – Traditionl clothing in iran

Women’s and even men’s clothing is very colorful in the north of the country and in Gilan province. The combination of colors are from the lush and flowery nature of this region that can be seen in the local clothes of this region. Men wear vests, coats, dark trousers, native shoes, hats, and finally Kola and Shula. Kola and Shula are a type of felt worn by shepherds. The local clothes of Gilani women are divided into 3 parts of Gilan, East, West and the center of Gilan. The dress of East Gilan is known as the dress of Ghasemabadi. Women’s clothing name in the west is Taleshi and in the center of Gilan it is Rosokhi. However, in all these clothes, long hedge skirts with sequined vests can be seen. Scarves are in light colors or white. 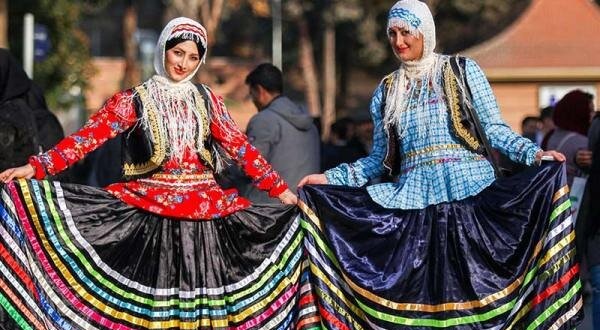 Local clothes of the people of Gilan

Turkmen people usually live in the northern and eastern parts of Golestan province and parts of Khorasan. Different colors such as beige and red can be seen in local Turkmen costumes. Women usually wear long shirts and some of them also wear face masks. Turkmen men’s woolen hats are one of the special features of their clothes.You can join our team, Iran Destination, and get more acquainted with Traditionl clothing in iran. Iran travel agency, Iran Destination, will organize your trip to Iran. You can offer your tailor-made trip to Iran or visit our programs on the Iran tour page. You can contact to our Iranian travel agency, our agents are online to answer all your questions. 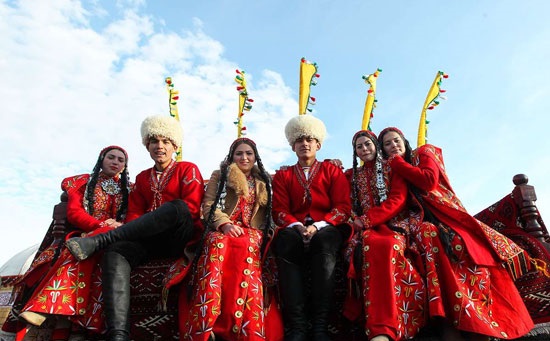 Local clothes of the people of Bandar Abbas and Qeshm

The people of the southern parts of our country and Qeshm Island are famous for their long floral dresses and masks or veils. These veils are usually for married women. Qeshmi women use thick fabrics for their pants. These pants have very beautiful decorations and are tight in the tail area of ​​the wrist. Men usually wear long white shirts, which is very effective due to the extreme heat of the south. 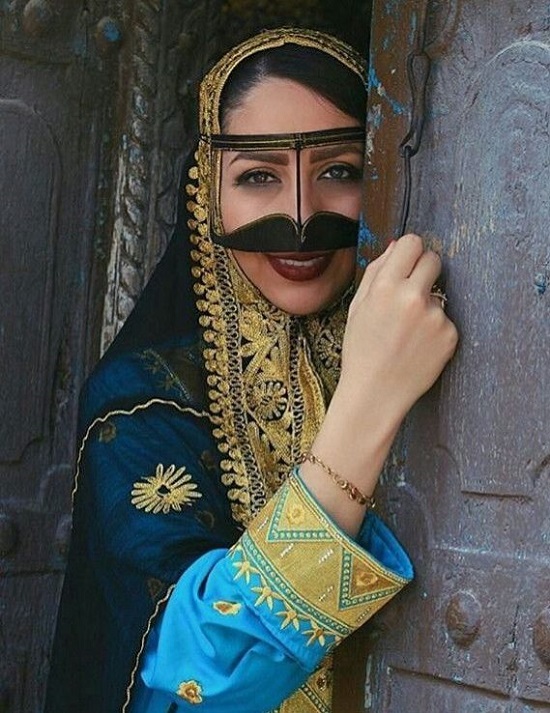 Local clothes of the people of Bandar Abbas and Qeshm

The Kurds have different clothes according to the different areas in which they live. Kurdish men’s pants are very famous, which are wide at the top and tight at the ankles. Men wear sweatshirts. Kurdish women’s scarves usually have different colors. Women wear long shirts, usually with a short vest. 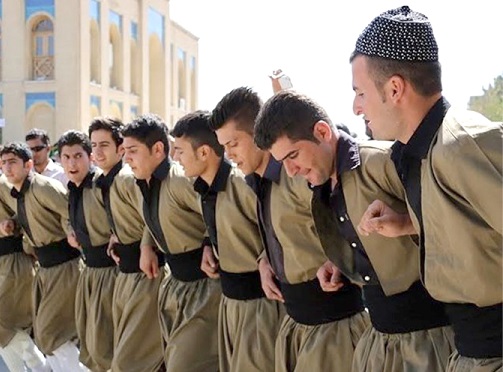 Khorasan province due to its large size, there is a great variety in its local clothing. The Kurdish tribes of Khorasan their clothes are very similar to other Kurdish tribes in the country. In North Khorasan, men’s clothing is in colors such as red. It consists of parts called sweatshirts, pants, slippers and belts. Men’s clothing in South Khorasan and areas such as Torbat-e Heydarieh and Torbat-e Jam is the same clothing that you see in the famous Khorasan woodwork ceremony. 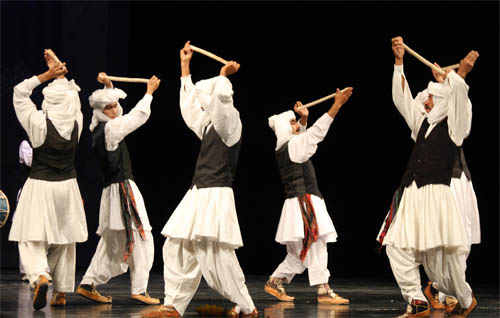