Three domes are among the landmarks of Urmia and located in the southeast of Urmia city. Also, it built in 580/1000 in southeastern Orumieh. Besides, the tomb or brick tower of the three domes belonged to the 6th/10th century. Furthermore, three inscriptions in kufic script remained in the entrance of the building. 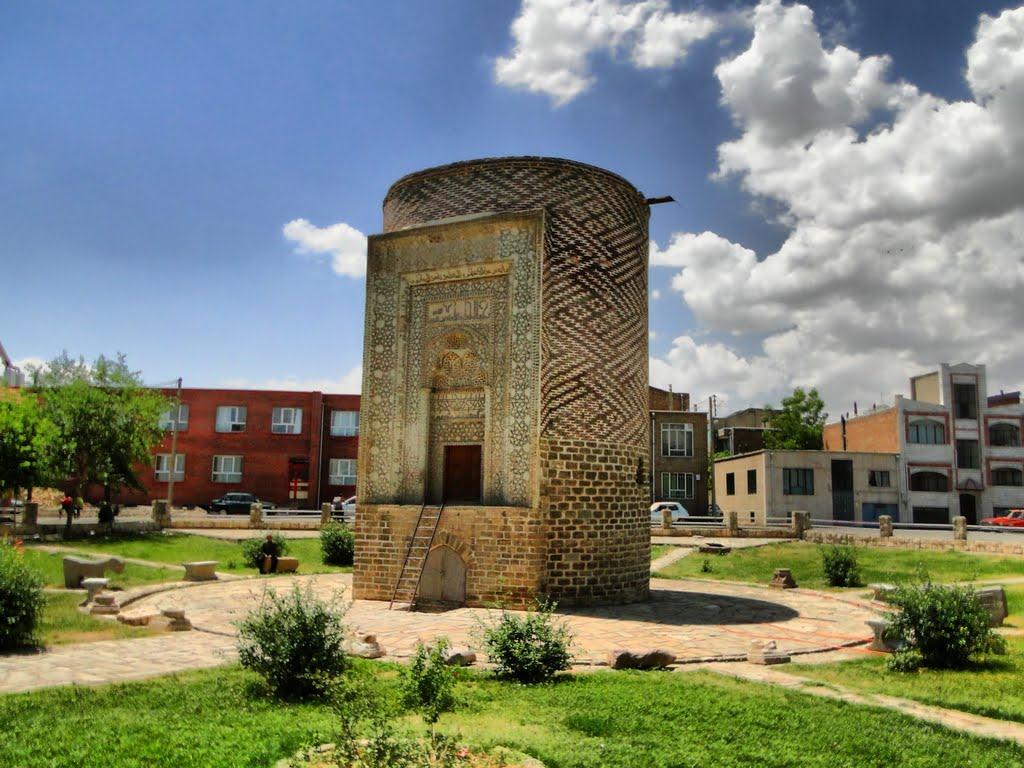 Some historians believe that the building of Three Domes built instead of a fire temple from the Sassanid era. Also, they have no credible documents as to the authenticity of their claims. Therefore, it may be possible to consider the tomb or brick tower of three domes belonging to the 6th/10th century.

In addition, according to this inscription, Three Domes built on the orders of a Seljuk emerald named Seth Qata al-Muzafari. Also, in terms of architecture, this building is very similar to the tombs of the 6th/10th century, especially Maragheh and other tombs of the Seljuk period. Moreover, the building of the three domes of Orumieh did not consider until the 19th century and first recognized by Nakhanikov in 1852.

The Three Domes building made of a long platform in the form of cylindrical and circular. Also, the diameter of the building is 5 meters and its height is 13 meters. Besides, the current building is two stores and there are valves on its four side. Furthermore, the first floor called the crypt, which has an arched cover, thereby separating it from the second floor.

In addition, the small door on the first floor is 1 meter and 70 centimeters high. Also, the second floor, called the Tomb Room, has a 2.5-meter-high derriere. Besides, in other words, the circular cylindrical building has a crypt that the upper part of it has converted by brick into a building containing the tomb room. Furthermore, Three Domes’ entry embedded in a shaped architectural form and in the cylindrical body of the tower. Moreover, its entrance gate located among the surface arches and architecturally it has given it a special ornament.

Moreover, the main roof of the Three Dome and its walls are all intact and stable. Also, the second floor, like other Seljuk values, built on the crypt. Besides, the head decorations at the entrance of the tomb are unique in its kind and decorated as pieces of stone and plaster with geometric motifs and inscriptions in Kufic script. Furthermore, the materials of the lower parts of the building up to a height of about 3.6 meters made of gray masonry stones. However, from this part up all the materials made of quadrangular bricks. At last, this work located in Urmia, Ostad Barzegar Street, and registered as one of the national monuments on December 6, 1935 with registration number 242.

Architecture outside the Three Domes

The main map is the circular tower, the front part of which added to the rectangular frame in the cylindrical body of the tower. Also, the tomb, in the form of maragheh domes, consists of a long stone platform containing a crypt on top of which a brick building fulfilled. Besides, Three Domes includes the tomb room.

In addition, Three Domes entry on the north side is like maragheh’s circular monument, inscribed in a splendid frame embedded in the cylindrical body of the tower. Besides, the entrance gate located among the flat arch with the rectangle frame. Also, Three Domes Kufic inscriptions located at the entrance of the tower, the upper part of which decorated with simple, three-row work. Furthermore, one immediately above the top of the valley, the other above the arch of the façade and the third on the rectangular context. The last katiba ends with this phrase: fi muharram al-thmanin and khumsma’a.

Architecture inside the tower

The interior map of the crypt and the square-shaped tomb room is that the architect with a special skill in a cylindrical tower. Also, this square-shaped room embedded and again this room converted into a circle with architectural measures. Besides, the wall of the tomb room decorated with sharp crescent arches and carbings and mogharnas corneas in the corners.

In addition, the roof of Three Domes room shaped and the way the bricks arranged is circular and single-center. Also, the floor of the tomb collapsed inside the labyrinth below. Besides, only around, there are brief remains. Moreover, the labyrinth covered with brick crescent arches as the base of the arches can see around. Furthermore, the floor of the crypt with beautiful geometric designs of the brick sold and the height of the crypt not known because of its roof deterioration.

According to the measurements, Three Domes can be approximately 1.5 meters tall. Also, if they didn’t imagine this difference like Maragheh and Nakhchivan with kasha. Besides, it was because they didn’t have any equipment in Urmia. Moreover, the important artistic point of this building, is the coloring and decoration of the stone that has given the building a special effect. In addition, the current building is two stores and there are valves on four side. The first floor called the crypt, which has an arched cover, thereby separating from the second floor. The first floor is 70.1 meters high.

According to the inscription at the entrance of the tower, which read by Khanykov. Also, it built by Abu Mansur’s son Moses, the history of the building, as the last one of the third inscription reads: Fi City of Muharram- Samnin and Khamsmae – 580 AH (1184 CE) and related to the Seljuk period in Azerbaijan.

In addition, a very interesting point in this tomb is the head in decorated with its exquisite and beautiful motifs. Besides, because tile decorations were common at the time. Also, there is not the slightest trace of staining in this tomb.

Moreover, the point that is somewhat surprising is that letters, lines and geometric motifs have made three domes with stones. Also, because architects used to make some decorative parts different from the building itself. Besides, although color decorations have not used, the architect has used very light brown bricks and stones to show his skill.