There’s a story that makes it abundantly clear how a small band of English holidaymakers changed Switzerland forever. It involves a bet between hotelier Johannes Badrutt and an aristocratic group of merchants and landowners that took place on a damp September evening in St Moritz in 1864. As the vacationers sat around the fire at the Engadiner Kulm Hotel, dreading the prospect of returning to the foggy London winter, the Swiss manager saw a golden opportunity.

You holiday here in summer,” he challenged them over a bottle of Veltliner red wine. “Why not enjoy the mountains year-round? Winter is so pleasant that on fine days you can even walk without a jacket.” Lured by the promise of blemish-free skies against a backdrop of lofty peaks, the Englishmen were pleased to accept the wager; up until then, St Moritz had been a modest hiking destination in July and August. But if Badrutt’s promise proved false, the hotelier would pay for their journey and winter-long stay. How could they lose? 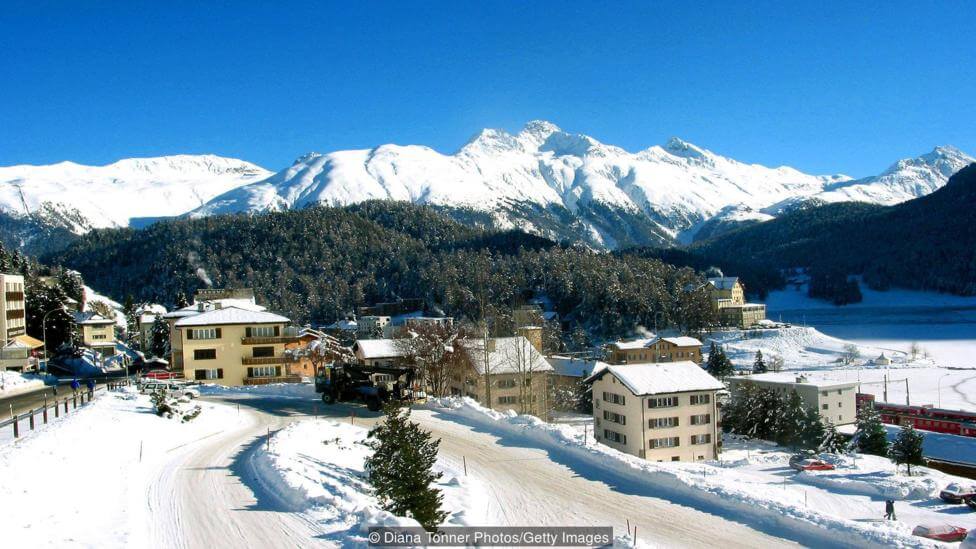 The genius of the wager, of course, was that when Badrutt won the bet (the Englishmen stayed on as paying guests until March) word quickly spread throughout their homeland about St Moritz’s distinctive ‘Champagne climate’ – dry and sunny with a high degree of snow certainty. Year-round tourism had arrived in the Alps, and the village of St Moritz seemed newborn.

Some people think it’s a legend, but it’s all true,” said Richard Leuenberger, general manager of the five-star Badrutt’s Palace, during my visit this past July. Opened by Johannes Badrutt’s son Caspar in 1896 to further reap the benefits of his father’s gamble, the hotel has become a byword for the resort town’s lavish excess. “Before the Badrutts there was little reason to come to St Moritz, or holiday in the Swiss mountains, in winter at all. There had long been the demand in summer, but winter? It was lunacy.”

That the Badrutts almost single-handedly marketed this untapped winter wonderland is a little spurious. The first tourist office in Switzerland had been established in the same year as the bet, and there are tales of an Anglican priest, one Reverend Alfred Strettell, who came to preach the gospel in St Moritz in 1861 before returning to England to advocate the resort’s potential as a winter destination in open letters to British newspapers. By this time, other resorts in the Swiss regional cantons of Graubünden and Bern were also flush with business, with clinics in Davos, Arosa, Leysin and Grindelwald developed as winter sanctuaries to cure patients with tuberculosis and respiratory diseases. 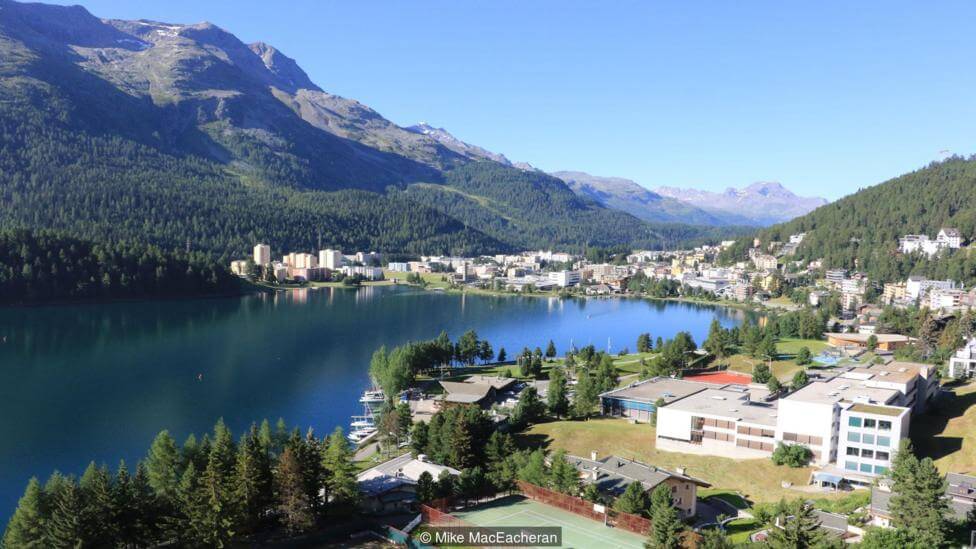 But what Badrutt did was make the Swiss mountains accessible in a way that no one else had done before. In order to pay off the high cost of his ongoing investment at the Engadiner Kulm, he needed to keep the hotel open year-round, paving the way for a winter ice rink and regular curling tournaments played with stones first brought by early Scottish visitors. And by the 1880s, the number of English-speaking arrivals had increased to such an extent that a local newspaper – the Engadine Express & Alpine Post – was published entirely in English. Still, Badrutt’s role as pioneer cannot be downplayed.

“Before him there was only 75 beds in the village,” said Leuenberger, showing me around the Palace’s Great Hall, otherwise known as the ‘living room’ of St Moritz. “But because of Badrutt that number exploded to more than 2,000 over the next four decades.” 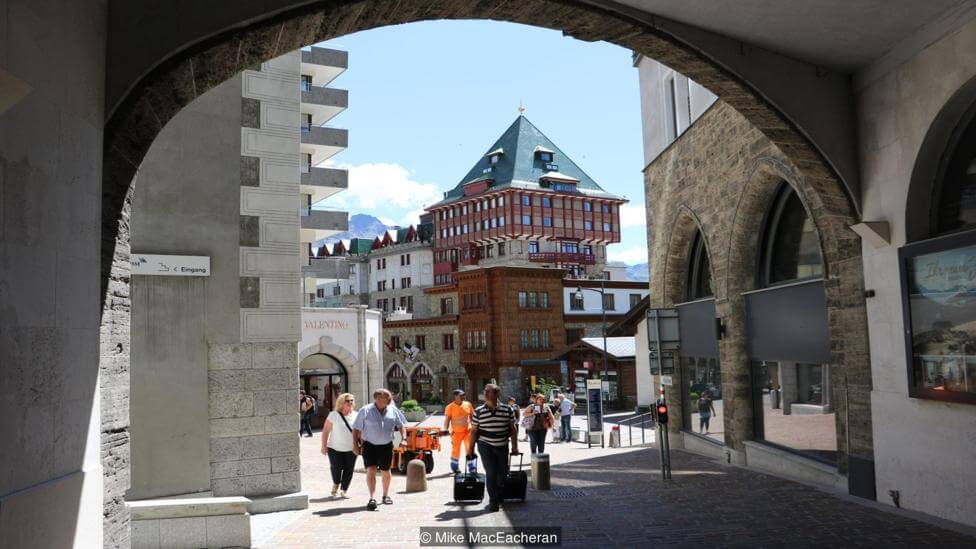 To truly understand the town’s role in marketing mountains to the world, I set off to explore in the company of John Webster, a historian and guide who, having studied St Moritz for 27 years, knows the resort’s backstory best.

“The concept of the winter holiday was born here – and I’ve never come across any claims to counter the argument,” he said, while looking out to the pyramid-like peaks of the Muottas Muragl. “From the late 19th Century on, St Moritz’s evolution and sphere of influence was relentless. There is a list of firsts in St Moritz that no one else has.”
Among those novelties was Switzerland’s first electric light and streetlight, both installed at the Engadiner Kulm in 1879. That same year, Badrutt brought flushing toilets into the Alps and built the first hydro-electric plant in the country. 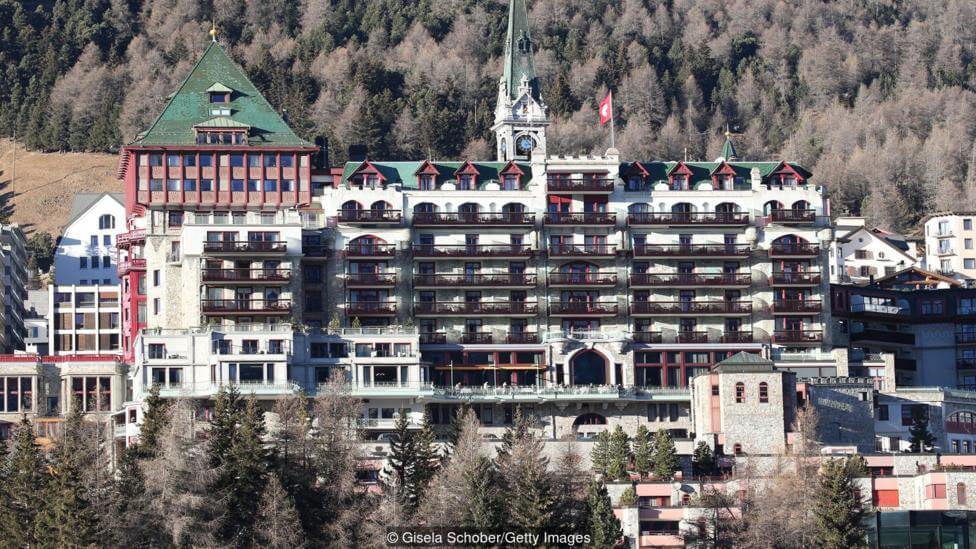 In tandem, winter sports found their place. Europe’s first curling tournament was held on frozen-over Lake St Moritz (now also the pitch and paddock for annual horse races, as well as ice polo and ice cricket tournaments). By 1882, the first European Ice-Skating Championships took place, then the first bobsleigh run and race were held in 1890. And all this was decades before downhill and slalom skiing became fashionable among the jet set.

The story of St Moritz is, in some ways, also a tale of social transformation.

“The newly wealthy were able to mingle with the aristocracy for the first time,” said Webster, singling out the fairytale rooftops of eight five-star hotels (nine if you include Grace St Moritz, opening in summer 2018). “And in this period, these palace hotels served as great stages.”

Evocations of the past include grainy photos of Hollywood stars like Gregory Peck tackling the notorious Cresta Run bobsleigh (fanatical rider Errol Flynn’s claim to fame was that he never once finished the course). Audrey Heburn would sit and have tea at Confiserie Hanselmann, a storied chocolate shop still doing a fine trade on Via Maistra.

But while the resort once reveled in Xanadu-like fantasy – outlandish stories of elephants and sea lions flown in for legendary parties at Badrutt’s Palace are all true – it remains equally bombastic in the face of fierce seasonal competition today. In particular, two recent game-changers include the Swiss resort town of Andermatt, plucked from obscurity by billionaire Egyptian property tycoon Samih Sawiris in 2013, and the Bürgenstock, a mega hotel and spa project nine years in the making that opened above Lake Lucerne this July. 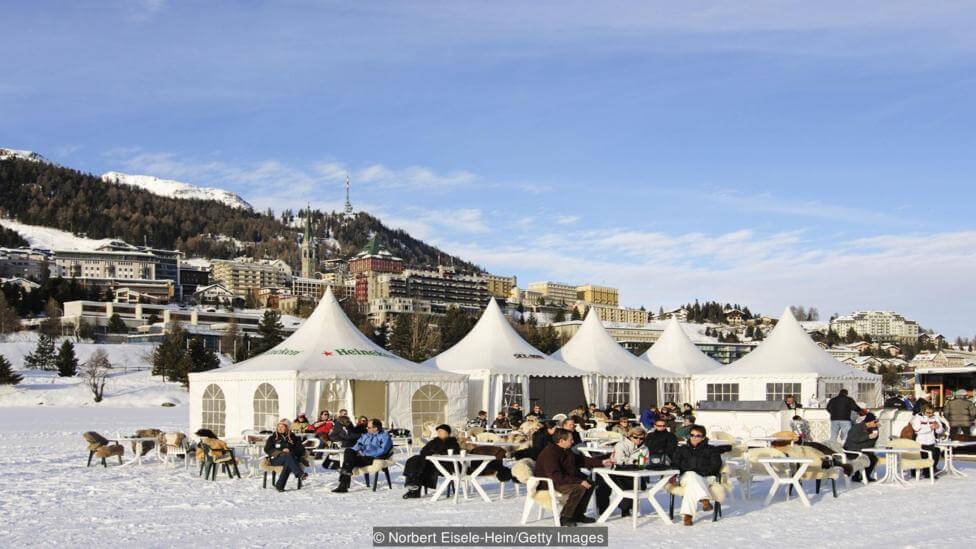 But there is still something that neither resort – nor St Moritz’s traditional rivals Gstaad and Zermatt – has. The Engadine Valley’s so-called ‘Champagne climate’. After all, St Moritz’s proud slogan, ‘300 days of sunshine a year’, is not only a cold, hard truth, but an undoubted wink to the past. Johannes Badrutt may be gone, but his impact will not be forgotten.