The temples that had to be moved:If Abu Simbel had not been saved, places like Vienna’s Historic Centre, Cambodia’s Angkor Wat and other Unesco World Heritage sites might only live on in history books.

Deep within the interior of the Great Temple at Abu Simbel, carved into a mountainside in southern Egypt’s ancient Nubian Valley, lies a vast, wondrous world. Pillars adorned with intricate military artworks support a ceiling painted with winged vultures. Floor-to-ceiling hieroglyphics depicting the victorious battles of Pharaoh Ramses II, the same man responsible for constructing this enormous temple, decorate the walls. Outside, four colossal statues of the pharaoh face east toward the rising sun, looking out over a crystal-clear lake.

It’s an incredible sight to behold, but one that if history had gone just a little bit differently, would not be here today. Instead, this temple would be under the lake’s waters. What’s even harder to imagine, if Abu Simbel had not been saved, places like Vienna’s Historic Centre, Cambodia’s Angkor Wat and other Unesco World Heritage sites might only live on in history books.

“Egypt has done a great job preserving their ancient temples,” said Kim Keating, director of global sales for luxury adventure tour company Geographic Expeditions. “And this [complex] – with soft lighting highlighting its interior artworks; graffiti that dates back to early invaders, documenting how Egypt was conquered over time; and its location in front of a beautiful lake so large it’s like peering out on to the ocean – is magnificent.” 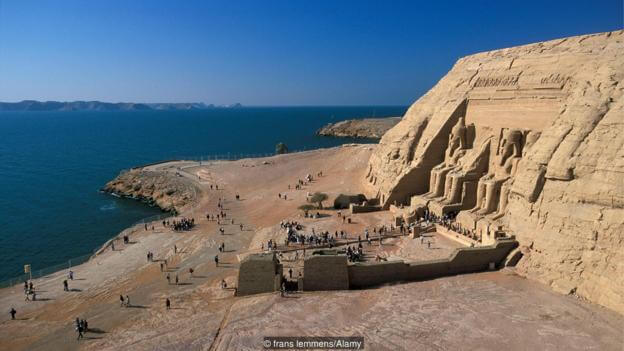 North Africa’s Nubian Valley straddles the border of southern Egypt and northern Sudan, a remote desert region dotted with palm-fringed oases and occasional wadis (seasonal rivers) that is home to the mighty Nile River, which winds its way past the Egyptian city of Aswan towards Cairo. In ancient days, this was a land of gold and riches, and one ruled by kings – many of whom built pyramids, monuments and temples, in part as a show of power. The Abu Simbel complex, built over the course of 20 years in the 13th Century BC, is one of the most impressive still standing today. Alongside the larger Great Temple stands a smaller temple that honours Ramses’ queen, Nefertari.

Keating was in awe when she saw the temples for the first time. But she was even more amazed to find out that in the early 1960s, a team of international engineers disassembled and then carefully moved – piece by piece – each of them. They then reassembled the temples more than 60m above their original location to save the complex from the Nile’s rising waters. That 5,250-sq-km lake that Keating described is Lake Nasser, a reservoir that formed when the valley flooded. Just more than 50 years ago, it didn’t even exist.

“It’s all done so perfectly,” she said. “It’s impossible to tell, even when you (like me) really try.” 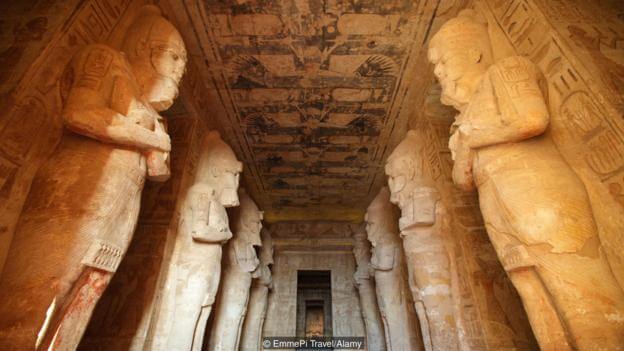 Unesco’s ‘Nubia Campaign’ came about in 1960, when the United Arab Republic (a political union of Egypt and Syria that existed between 1958 and 1961) began construction on a new dam along the Nile River, just outside of Aswan. While the dam would improve irrigation throughout the valley as well as significantly increase Egypt’s hydroelectric output, in a few years the swelling waters would also completely submerge Abu Simbel’s exquisite temples.

In an effort to prevent the temples’ destruction, Unesco embarked on its first-ever collaborative international rescue effort (the organisation initially formed in 1945 to promote a joined culture of peace and prevent the outbreak of another war). This incredible effort later became the catalyst for a World Heritage list that would help protect and promote what now totals 1,073 significant cultural and natural sites around the globe.

“I had no idea before visiting Abu Simbel that it led to Unesco creating a World Heritage list,” Keating said. “But I can definitely see why. The setting… the history… it all has that wow factor.” 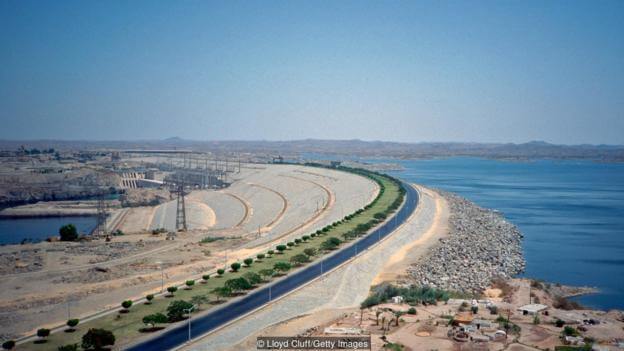 However, the process of relocating the temples wasn’t so simple.

“It was a huge undertaking,” explained Dr Mechtild Rössler, Unesco’s director of Heritage Division and director of the World Heritage Centre. “One that I’m not sure could be done again today, with questions such as the ways a campaign of this magnitude would impact a region both environmentally and socially coming into play.”

Beginning in November 1963, a group of hydrologists, engineers, archaeologists and other professionals set out on Unesco’s multi-year plan to break down both temples, cutting them into precise blocks (807 for the Great Temple, 235 for the smaller one) that were then numbered, carefully moved and restored to their original grandeur within a specially created mountain facade. Workers even recalculated the exact measurements needed to recreate the same solar alignment, assuring that twice a year, on about 22 February (the date of Ramses II’s ascension to the throne) and 22 October (his birthday), the rising sun would continue to shine through a narrow opening to illuminate the sculpted face of King Ramses II and those of two other statues deep inside the Great Temple’s interior. Finally, in September 1968, a colourful ceremony marked the project’s completion.

“[Abu Simbel] was a case in which the confluences of Unesco – culture, science and education – came together in an amazing way,” Dr Rössler said. 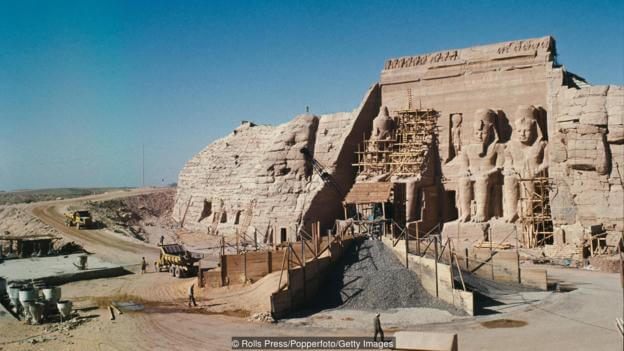 Indeed, it has gone down as one of history’s greatest archaeological engineering challenges. Imagine such a massive project being conducted in what seems to be the middle of nowhere, often in stifling heat. In retrospect, the whole thing seems preposterous, but it was exactly what Unesco needed to prove to themselves that by pulling together resources, they were virtually unstoppable.

“The completion of such an enormous and complex project helped [the organisation] realise that we were capable of three main things,” Dr Rössler said. “First, bringing together the best expertise the world has to offer. Second, securing the international cooperation of its members [at the time totalling around 100 member states; today there are 195 member states and 10 associate members]. And third: assuring the responsibility of the international community to bring together funding and support that would help the world’s heritage as a whole.”

“We recognised that one country alone is just not capable,” she said. 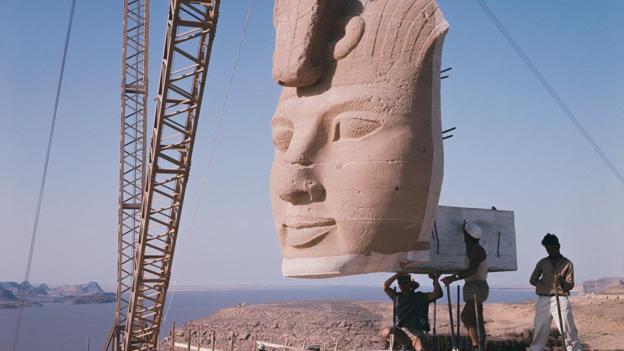 With momentum flowing, Unesco continued launching campaigns, including the ongoing safeguarding of Venice, nearly destroyed by floods in the mid-1960s. In 1965, a White House conference in Washington DC proposed the formation of a ‘World Heritage Trust’ to continuously preserve the world’s ‘superb natural and scenic areas and historic sites’. A few years later, the International Union for Conservation of Nature (IUCN) crafted a similar proposal. But it wasn’t until November 1972 that the General Conference of Unesco adopted the Convention concerning the Protection of World Cultural and Natural Heritage, merging both drafts together to preserve cultural and natural heritage equally. 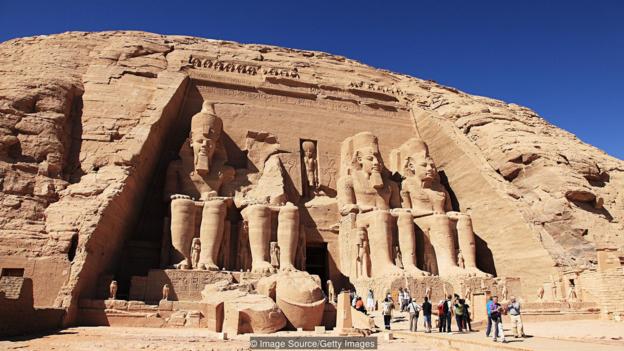 Today, the Nubia Campaign’s success is responsible for the conservation and preservation of places like Mexico’s Monarch Butterfly Biosphere Reserve, Germany’s Caves and Ice Age Art in the Swabian Jura, and South Africa’s Robben Island, where the country’s former president, Nelson Mandela, served time in a tiny prison cell. It has also led to more elaborate safeguarding measures – similar to those taken at Abu Simbel – at World Heritage sites around the globe. These exist especially in war-torn zones like Iraq and Yemen, as well as Ethiopia, where just a decade ago Unesco returned the Obelisk of Axum: a 24m-tall, 160-tonne granite obelisk that the Italians took piecemeal back to Rome in 1937 under Mussolini’s fascist regime.

“The return and re-erection of the obelisk – this was the moment that marked the end of the Second World War [for Ethiopians],” Dr Rössler said, adding: “People need their heritage. Natural disasters, war… we can’t let these things take that heritage away.”

Fifty years after the completion of the Nubia project, the Abu Simbel temples remain a popular – albeit still remote – traveller pilgrimage. Lake Nasser is known for its excellent freshwater fishing, as well as its numerous crocodiles. But the highlight of the Nubian Valley is undoubtedly the temple complex, which 3,000 years on endures as an iconic symbol of both humankind’s common heritage and how one ancient monument can help preserve the planet. Of course, it could have been something else entirely:

“People might still be visiting the temples,” said Dr Rössler, “but it would be through snorkelling or diving or – because of the crocodiles – looking at them through the floor of a glass-bottom boat.”