How i learned to go in circles in Kathmandu

Circling Boudhanath Stupa each morning at sunrise, I learned to slow down, to stop fretting about ‘lost productivity’ and, instead, go in circles for a while.

Circles don’t get much respect. They are the pariahs of geometry; round pegs in a world of square holes. Western culture has little good to say about the circle. If we’re stuck on a project, we’re told to stop going in circles. Such criticism makes our heads spin, so we respond, as people say in the US, by ‘circling the wagons’.

Lines and angles, though, are good. We’re told to travel in a straight line, to stand up straight and be a straight shooter – or maybe a straight arrow. Either way, it’s imperative that we think straight.

For a long time, I, too, bought into this anti-circle bias. And while I often strayed from the straight and narrow, I always chalked up my circuitous path to personal shortcomings. It never occurred to me that circles might be good. Then I discovered Boudhanath. 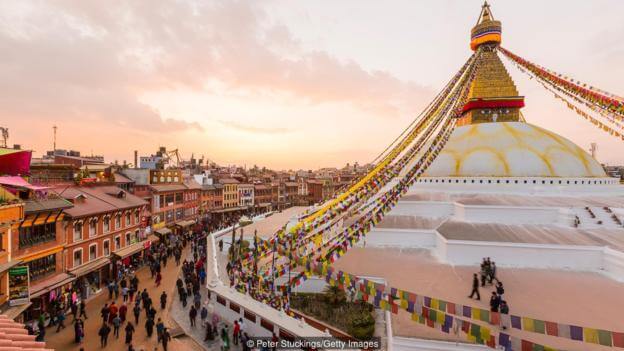 Literally ‘Buddha place’, Boudhanath (or Boudha, for short) is a village nestled within the sprawling Nepalese city of Kathmandu. It is the city’s large and generous Buddhist heart, populated by tens of thousands of Tibetans and hundreds of Western spiritual seekers. Even though it’s now a part of Kathmandu, Boudha retains the self-contained cosiness of a village.

When I first arrived, rolling my luggage over the rocky pavement (the wheels going round and round), I was immediately struck by the circularity of the place. Everywhere I looked, I saw circles. Life here revolves, literally, around a giant marshmallow. Well, that’s what it looked like to me. It is, in fact, a stupa, a huge white mound topped with a glimmering gold tower and, painted in bright colours, the all-seeing eyes of the Buddha.

All stupas represent the Buddha Mind, and circling it is believed to bring one closer to enlightenment. At any time of day, hundreds of people circle Boudhanath Stupa, chanting mantras, kneading their mala (round prayer beads) and twirling prayer wheels, cylinders of metal and wood that contain scrolls of Buddhist mantras. With the flick of a wrist, the cylinders turn round and round, while the people walk round and round. 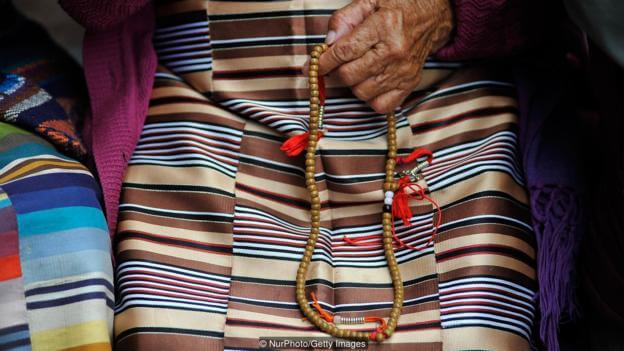 Buddhists love round things: the mandala, or circular representation of the universe, the prayer wheel, the stupa. Maybe that’s why, as one American convert to Buddhism told me, the lamas of Boudha are notoriously tardy. If everything is circular, including time, punctuality becomes a matter of perspective. You might be very late, or very early. It all depends on how you look at it.

A central element of Buddhism, as well as Hinduism, is samsara, the nearly infinite cycle of birth and rebirth that is only broken once we achieve nirvana. Other faiths contain circularity, too. For instance, the whirling dervishes of Sufism, who, as they twirl round and round are said to get closer to Allah.

Like many Westerners, I view time, and history, as linear. I picture a timeline like the ones thrust upon me in secondary-school history lessons: a straight line that begins at point A and ends at point B. Many cultures, though, don’t see it that way. They view time, and indeed the universe, as circular. It’s called the Wheel of Time, or the Wheel of History, and it appears in a surprisingly large, and diverse, number of cultures, from the Q’ero Indians of Peru to the Hopi Indians of Arizona to the philosophy of Friedrich Nietzsche, who posited the notion of ‘eternal recurrence’. Nietzsche believed our lives repeat themselves in exactly the same way an infinite number of times. 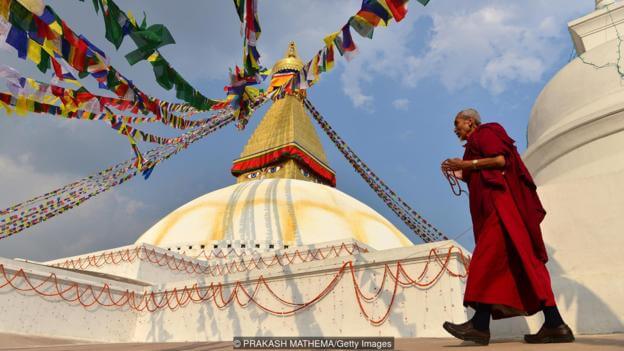 As the days and weeks in Boudha passed, my linear thinking began to change, to bend. It wasn’t easy, but thankfully I had help: my friend James Hopkins, an investment banker-turned-Buddhist disciple and long-time resident of Boudha. One day, over breakfast, I confessed to Hopkins that I have trouble going in circles. I’d recently purchased a Fitbit, and progress and productivity were on my mind.

“Ultimately, there is nowhere to go and nothing to do,” he told me, letting the beguiling words hover in the crisp morning air.

I found this notion simultaneously appealing and terrifying. If there is nothing to do, how do I know if I’m doing this nothingness right? I also found it odd coming from Hopkins, who is anything but idle. He’s up at dawn, meditating, then circling the stupa then working on his non-profit project Quilts for Kids. How can you be so busy, so active, yet tell me that ‘ultimately there is nothing to do?’. Isn’t that a contradiction?

Not at all, Hopkins said. There is a difference, he explained, between outward action and inner stillness. Activity is good, he said, especially activity that benefits other sentient beings. 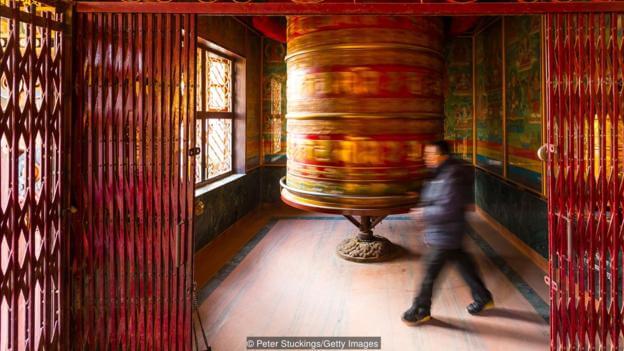 My life in Boudha took on a circularity of its own. Each day, I woke at 05:30, splashed water on my face, then stumbled downstairs and out of the front door to join the river of people circling Boudhanath Stupa. At this hour, there were no tourists. It was just me and a few hundred Tibetans, going round and round. It felt good to walk, to sense the ground beneath my feet, to take in the essence, the ‘suchness’ of the place, as a Buddhist would put it. The light was milky and soft, the sun only beginning to peek above the horizon.

I heard the clickety-clack of prayer wheels, the murmur of mantras, the flutter of pigeons flapping their wings, the clanking of shop shutters yanked open, the chortle of spoken Tibetan. And, always, that soundtrack to Boudha, seeping out of every trinket shop and chai stand or hummed aloud by the circumambulators: Om Mani Padme Hum. It is the best known of the Tibetan mantras. It means literally ‘Hail to the Jewel in the Lotus’. The lotus flower grows in muck and mud yet blossoms clean and beautiful. It’s a nice sentiment, but what I like most about it is simply the way it sounds in Tibetan, the vibrations. The mantra wormed itself into my mind and I found myself chanting it without realising that I was doing so.

I continued to walk until my legs tired and my mind settled. The circumambulations are open-ended, freestyle. There’s no proscribed number of circuits. This is liberating, and frightening. How do you know when enough is enough?

“You’ll know,” Hopkins had told me, with a mischievous smile. 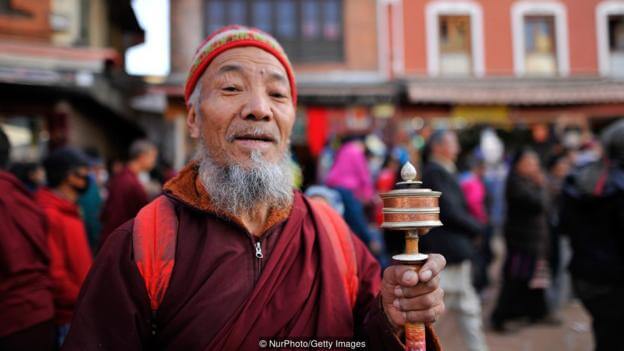 But I didn’t know. That was the problem. I couldn’t jettison my linear thinking. As I circled the stupa, I periodically twisted my wrist to consult my Fitbit. In theory, the device tracks my ‘progress’. It faithfully registers steps taken (3,635), miles traversed (1.68) and calories burned (879). In reality, though, it tells me nothing. I was going in a circle, getting nowhere.

The circle exposes the lie that is progress. Tracking your headway in a circle is not only futile but absurd. There are no straight lines. The question that a place like Boudha and a faith like Buddhism pose is this: can you acknowledge this futility? More than that, can you embrace the absurdity of the circle?

For the past few years, I’ve returned to Boudha every autumn. At first, I notice the small differences: a wood-fired pizza joint has opened, which annoys me (if I wanted wood-fired pizza, I would have stayed home) and a new sign declaring that ‘the use of drones is strictly prohibited’. Plenty about Boudha hasn’t changed, though. There’s the elderly Tibetan woman, pausing every few feet and falling to the ground, prostrating herself again and again. There is the little shop selling ‘Happy Buddhist Things’. And there is my friend James Hopkins.

Does the fact that I’ve managed to return each year amount to progress? A while ago, I might have framed it that way, but not now. I am simply revisiting a little corner – no, too angular – a small bubble on the planet that has taught me a very valuable geometry lesson. I have come full circle in Kathmandu.

You can read World Travel News or other articles about Iran provided by our Iran Tour and Travel Agency.

You can also contact us for any issue in your mind.