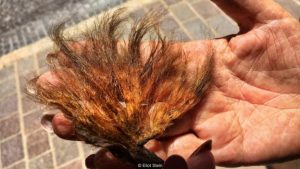 62-year-old Chiara Vigo slips on a white tunic, recites a prayer and plunges headfirst into the crystalline sea off the tiny Sardinian island of Sant’Antioco.

Using the moonlight to guide her, Vigo descends up to 15m below the surface to reach a series of secluded underwater coves and grassy lagoons that the women in her family have kept secret for the past 24 generations. She then uses a tiny scalpel to carefully trim the razor-thin fibres growing from the tips of a highly endangered Mediterranean clam known as the noble pen shell, or pinna nobilis.It takes about 100 dives to harvest 30g of usable strands, which form when the mollusc’s secreted saliva comes in contact with salt water and solidifies into keratin. Only then is Vigo ready to begin cleaning, spinning and weaving the delicate threads. Known as byssus, or sea silk, it’s one of the rarest and most coveted materials in the world.
Today, Vigo is believed to be the last person on Earth who still knows how to harvest, dye and embroider sea silk into elaborate patterns that glisten like gold in the sunlight. 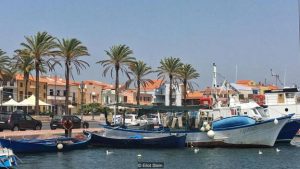 Women in Mesopotamia used the exceptionally light fabric to embroider clothes for their kings some 5,000 years ago. It was harvested to make robes for King Solomon, bracelets for Nefertiti, and holy vestments for priests, popes and pharaohs. It’s referenced on the Rosetta Stone, mentioned 45 times in the Old Testament and thought to be the material that God commanded Moses to drape on the altar in the Tabernacle. 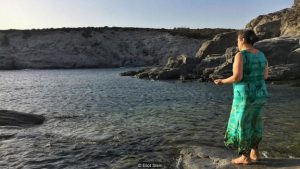 No-one is precisely sure how or why the women in Vigo’s family started weaving byssus, but for more than 1,000 years, the intricate techniques, patterns and dying formulas of sea silk have been passed down through this astonishing thread of women – each of whom has guarded the secrets tightly before teaching them to their daughters, nieces or granddaughters.
After an invitation to visit Vigo’s one-room studio, I suddenly found myself face-to-face with the last surviving sea silk seamstress, watching her magically spin solidified clam spit into gold. 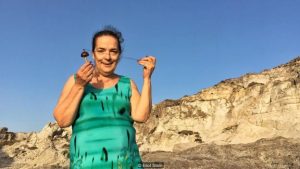 I slowly approached the small wooden table where Vigo worked, walking past a 200-year-old loom, glass jars filled with murky indigo and amber potions and a certificate confirming her highest order of knighthood from the Italian Republic cast aside on the floor.

“If you want to enter my world, I’ll show it to you,” she smiled. “But you’d have to stay here for a lifetime to understand it.”

Vigo learned the ancient craft from her maternal grandmother, who taught traditional wool weaving techniques on manual looms to the women of Sant’Antioco for 60 years. She remembers her grandmother paddling her into the ocean in a rowboat to teach her to dive when she was three years old. By age 12, she sat atop a pillow, weaving at the loom.
“My grandmother wove in me a tapestry that was impossible to unwind,” Vigo said. “Since then, I’ve dedicated my life to the sea, just as those who have come before me.” 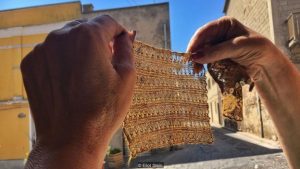 Vigo is known as su maistu (‘the master’, in Sardo). There can only be one maistu at a time, and in order to become one, you must devote your life to learning the techniques from the existing master. Like the 23 women before her, Vigo has never made a penny from her work. She is bound by a sacred ‘Sea Oath’ that maintains that byssus should never be bought or sold.
In fact, despite weaving works for display in the Louvre, the British Museum and the Vatican, Vigo doesn’t have a single piece of byssus in her home. She lives in a modest apartment with her husband, and they live off his pension as a coal miner and donations from visitors who stop by Vigo’s studio.

Instead, Vigo explained that the only way to receive byssus is as a gift. She’s created pieces for Pope Benedict XVI and the Queen of Denmark, but more often than not she embroiders designs for newlywed couples, children celebrating a christening and women who come to her in hopes of becoming pregnant.

“Byssus doesn’t belong to me, but to everyone,” Vigo asserted. “Selling it would be like trying to profit from the sun or the tides.”

But that hasn’t stopped people from trying. According to Małgorzata Biniecka, author of The Masters of Byssus, Silk and Linen, until the 1930s the only other place besides Sant’Antioco where the tradition of sea silk harvesting and embroidering continued was the city of Taranto, Italy.

“A woman there forsake the Sea Oath and tried to establish a commercial byssus industry,” Biniecka said. “A year later, it went bankrupt and she mysteriously died.”

More recently, a Japanese businessman approached Vigo with an offer to purchase her most famous piece, ‘The Lion of Women’, for €2.5 million. It took Vigo four years to stitch the glimmering 45x45cm design with her fingernails, and she dedicated it to women everywhere.
“I told him, ‘Absolutely not’,” she declared. “The women of the world are not for sale.”

Neither is the painstaking process behind her pieces, which she slowly revealed during my four-day visit. 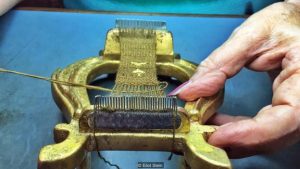 After harvesting raw byssus from the depths of the sea, she desalts the fibres by submerging them in fresh water for 25 days, changing the water every three hours. Once they dry, she cleans the threads with a carding brush to remove any remaining sediment.

Then comes the hardest part: separating each strand of pure sea silk from the tangle of raw byssus. Because sea silk is three times finer than a strand of human hair, Vigo peers through a lamp with a magnifying glass as she delicately plucks each thread of silk using a pair of tweezers.

“It may seem easy now,” she said. “But my fingers have been practicing this for 50 years.”
On several occasions after Vigo extracted a thick tuft of fibres, she ordered me to close my eyes and extend my hand. Each time I felt nothing. After about 10 seconds, I’d open my eyes to see Vigo rolling a weightless cloud of sea silk back and forth on my palm.

Next, she twists the silk manually around a small wooden spindle, usually singing in Sardo – the closest living form of Latin – during the process. When the fibres form a long thread, she grabs a jar of cloudy yellowish liquid from the shelf.

“Now, we’ll enter a magical realm,” she said, dropping the thin thread into a secret concoction of lemon, spices and 15 different types of algae. Within seconds, the thread becomes elastic and she excitedly ushered me outside to show how it shimmered in the sunlight. Vigo has an encyclopaedic knowledge of 124 natural dye variations made from fruits, flowers and seashells.

Finally, Vigo intertwines the spun silk into the linen warp using her fingernails. It takes 15 straight days of extracting and dying raw byssus to create enough threads to weave just a few centimetres. Some pieces, like a 50x60cm cloth of pure sea silk weighing just 2g, take six years to stitch. Others, like the larger tapestries draped atop her loom depicting Biblical passages and pagan deities, take even longer.

“There are 140 patterns in my family, eight of which will never be written and have been passed down orally from generation to generation,” she said.

But after more than 1,000 years in the same matrilineal family tree, this ancient thread may soon unravel.

According to tradition, the heir to the byssus secrets is Vigo’s youngest daughter, Maddalena. Like her own grandmother, Vigo began teaching her how to dive and embroider at an early age.
“The only thing she’s missing is the formulas for the dye potions,” Vigo told me.

But there’s a problem: “My mother and I are very different,” Maddalena said from her home in Dublin, Ireland, where she’s been living for the past two years. “People have always told me that I’d be a fool to allow this art to die, but I’m desperately torn. My life is mine.”

What’s more, after creating the world’s only museum dedicated to byssus in 2005, Vigo awoke one day last autumn to find that the government of Sant’Antioco had unexpectedly closed her free Museo del Bisso, citing that the building’s electrical system wasn’t up to code.

“The ‘electrical problem’ was me!” Vigo snapped. “The municipality tried to force me to charge entrance fees and write down my patterns and secrets. But I will defend this sacred oath with my fingernails as long as I breathe!”
The news drew national attention, spurring an online petition that garnered nearly 20,000 signatures – including that of the President of Sardinia – to no avail.

Recently, two young artists started a crowdfunding campaign to help Vigo rent the one-room studio where she now works. Ironically, it’s the same room where Vigo’s grandmother taught her how to spin sea silk 50 years ago. Unless they can raise €85,000 to purchase the rent-to-own property by November 2018, the town will evict her and the world will no longer be able to watch its last sea silk seamstress spin byssus into gold.
On my last evening with Vigo, she led me to a secluded cove where women in her family have prayed for as long as she can remember. As the sun melted into the sea, she stood at the edge of a tidal pool, closed her eyes and began a mystical, almost shamanic chant.

She then reached deep into a bag, pulled out a clump of 300-year-old byssus from a vial, and spun a long thread of sea silk.

“The secrets may die with me,” she said, tying the thread around my wrist. “But the silk of the sea will live on.” 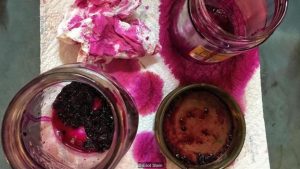