The islands of unbridled imagination

The islands of unbridled imagination 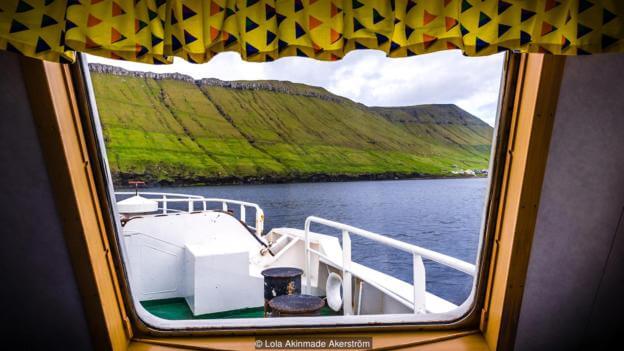 Creative surrender in the faroe Islands

“When I conceded to their flow, the Faroe Islands showed me beauty in jaggedness, euphoria in unpredictability and reverence that comes with grandeur.”

I had a death grip on the steering wheel. My fingers clutched it tightly as I nervously leaned forward in my seat, my right foot hovering on the brake. I was slowly ringing the Faroese island of Streymoy, driving way below the recommended speed and snaking my way along the steep, craggy coastlines as the dark waters of the North Atlantic churned below.

“You know what we call this speed on the Faroe Islands?” Olí asked me as I rolled up to his farm. “Funeral speed,” he laughed, referring to the slow crawl of a funeral procession. “Now I understand why you were late.”

My first stop in the Faroe Islands was supposed to be dinner with Olí and his wife Anna, who regularly invite visitors into their home in the sleepy cliffside village of Velbastaður to experience heimablídni – home-cooked hospitality as part of a supper club they organise. But as my plane descended parallel to staggering cliffs on the island of Vágar, and as I watched waterfalls gracefully tumble down into the sea, I already sensed I was arriving at a place where surrendering control was inevitable.

Visiting the Faroe Islands was supposed to be a tick off my bucket list. A quick, three-day detour on my way home to Sweden from Iceland meant my itinerary was jam-packed. These 18 remote islands are known for their jarring beauty, and as a photographer, I was coming with a predetermined list of shots I knew I had to have – like the iconic Mulafossur Waterfall, which pops up when you Google ‘Faroe Islands’. Its majestic stream plunges off a cliff and into the sea while the Monopoly-like houses in the village of Gásadalur sit clustered together in a lush backdrop of green moss.

This isolated hamlet was long closed off to the world, accessible only by boat, helicopter or a three-hour hike. Blasting a tunnel through rock in 2004 instantly made it a mere 20-minute drive from the airport – never mind that it was in the opposite direction of where I was supposed to meet Olí and Anna that evening, which was an hour’s drive away.

I wasn’t sure if I would have time to get to the waterfall and then backtrack towards their place, but I hopped in my rental car and went for it.

And, thus began a series of decisions that would derail my itinerary yet rekindle an inner creativity I’d lost touch with over the years. 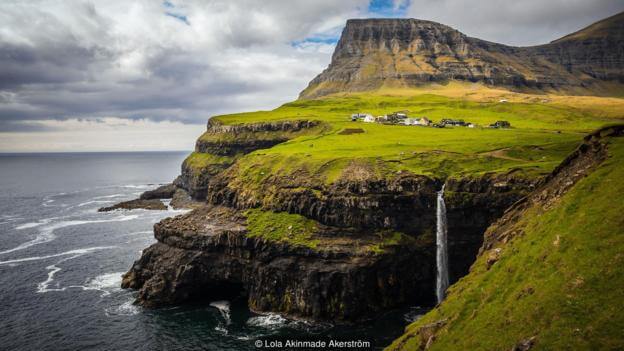 By the time I snapped my cookie-cutter image of Mulafossur and made it to dinner, driving below the speed limit, I was 90 minutes late, and Olí and Anna’s other guests had been patiently waiting: a group of five young Belgian artists and producers.

Unlike my loaded schedule, they were crisscrossing Faroese islands and villages for two weeks – working on creative projects, flowing with the wind and coming up with imaginative ideas on the fly. They were completely surrendering to where the islands wanted to take them, and more importantly, what they wanted to show them.

The youngest, a noted fashion photographer in Belgium named Charlotte, was in her early 20s and was shooting Faroese residents in whimsical situations. She was gaining enough trust from strangers to pose them in improvised ways – like hiding them behind bushes and stonewalls or arranging fishermen with lobsters and farmers with lambs.

Raphael, a popular singer-songwriter in Belgium, was recording the sounds of the Faroe Islands – the bleating of sheep, humming of ferries and crashing of rocks – as they travelled through it. Rounding out the crew was Sylvie, their producer; videographer Brice; and Nizar, Charlotte’s manager.

While wafts of Anna’s baked curried cod filled the minimalist abode, I listened to my dining companions passionately explain their projects. I found them intriguing. Surrounded by sheep-wool throws, our conversation ebbed to the team’s next destination: the island of Hestur.

“Hestur is right there,” Olí said, pointing through the floor-to-ceiling windows across his cliff-side backyard. The only way to get there was by an irregular ferry from Gamlarætt.

Our conversation ended abruptly as Charlotte rushed over, fingers flailing in the air. I recognised that light bulb of ideas that had gone off brightly within her.

“I would like to photograph you on the roof!” she announced to initial trepidation from our hosts.

“You know what? When you say yes to life, you open doors,” Olí finally replied, looking at Anna. “That’s why we run these dinners and invite strangers into our home. Who knows how the evening ends!”

Within minutes, a red chair, an ironing board and two Border Collies were passed up as props onto Olí and Anna’s moss-covered roof. Curiosity soon led neighbours to slowly file out of their own homes, cameras in tow. The energy coursing through the cool evening air inspired everyone to start snapping away, including me. 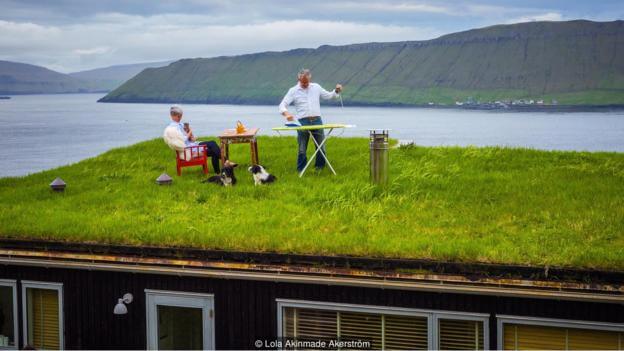 This made me wonder what I was like when I was Charlotte’s age, 15 years ago.

I had similar creative spells swirling within me but I never fully embraced them. I wanted to be a travel photographer, and the travel photography I saw in magazines often captured a place in a very specific, straightforward way.

I also used to be an oil painter and my travel photos initially inspired my paintings until I switched over to photography as a medium of artistic expression. As the years went on and my photos began appearing in different magazines, I realised the ones chosen for publication fit someone else’s voice: the publication’s, not mine.

But as I watched Charlotte improvise on the roof, using the grandeur of those outer islands as a backdrop, I began to question what capturing a place truly means. After all, in a single shot Charlotte artistically staged, I saw Olí’s extroversion and Anna’s introversion, revealing who they were as people.

I wanted to surrender to that creative force that seemed to envelope Charlotte, so I decided to ditch my itinerary and follow the Belgians to Hestur, the quiet island resting like a giant in the mist across the fjord.

If they would let me, that is.

As we gathered back around the table, the question tumbled out before I could stop myself.

“Can I… you know… follow you to Hestur?” I was unsure of my own voice. These strangers were so much younger than me, and the last thing I wanted was to be the old lady cramping their style.

“Yes, of course you can!” Sylvie responded. Nods from the others supported her invitation. Later, I drove them to Olí’s farm, a few kilometres from his house, where the Belgians were going to sleep in the barn, right above his Icelandic horses.

The next morning, we set off together. 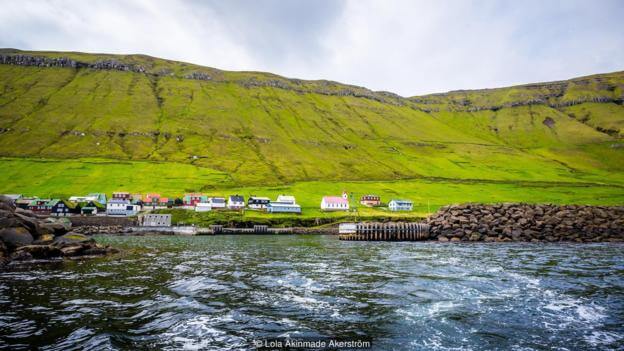 Hestur means ‘horse’ in Faroese and there are no roads on its 6 sq km. The island is home to a colony of guillemot seabirds and deep caves where famous Faroese musicians play concerts as waves thrash against rock walls.

We were meeting Tróndur, a local cod fisherman in his early 50s. During his youth, there were at least 80 residents, but now, Hestur had dwindled into an accidental retirement community of around 21 people.

We arrived to dead silence and no Tróndur. As the ferry disappeared, we fanned out, wandering down desolate lanes lined with hobbit-like cottages, turf roofs and bright red window frames. We spotted one curtain half-pulled back. Someone was watching us. The second we inched closer, it fell back down, shutting us outside.

I began to second-guess this detour and returned to the shore where the ferry had dropped us off. Meanwhile, Nizar, Raphael and Brice found a deflated ball and started an impromptu game of football, while Sylvie and Charlotte continued exploring the village.

About 45 minutes later, a sturdy fisherman with freckles and ginger-coloured hair tramped up and introduced himself as Tróndur. Alongside him was a stone-faced older man holding a pair of binoculars named Jermond. Soon, Charlotte started photographing Jermond in playful poses with his binoculars.

As Charlotte worked, an elderly woman walked by with a basket of laundry under her arms and stopped out of curiosity. She only spoke Danish and Faroese, but within seconds, we had learned her name: Hermanda.

For the next two hours, Hestur became the Belgians’ studio. Charlotte found a wheelbarrow and convinced Hermanda with a series of smiles and gestures to sit in it and pose, while Raphael recorded a soundtrack of Hestur: the football being kicked, the slow hum of the ferry as it turned away. Watching these creative artists reignited something deep within me that I recognised from my youth: unbridled imagination. 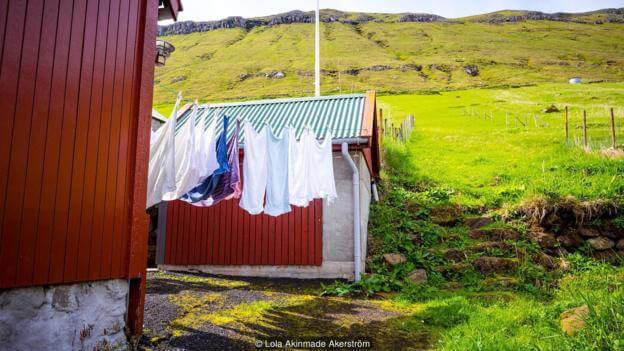 Eventually, Raphael lowered his microphone and looked up at the mountain behind Hermanda’s maroon cottage.

“No,” he responded, before sprinting up the mossy terrain as far as he could and crawling on all fours as it became steeper.

As I watched him go up and skip back down, I didn’t long for his youth and agility. I longed for that time in my life when I never second-guessed my instincts and talent. He wasn’t a climber, but he knew he could climb that mountain if he pushed himself. I realised that I could become that master photographer I’ve always dreamed of – I just needed to keep pushing myself.

After her impromptu photo session, Hermanda invited us into her modest cottage for tea. Raphael found her old acoustic guitar and started serenading us with unreleased songs. I could feel tears welling up behind my eyes.

This detour to Hestur was showing me that I hadn’t even begun to explore what I was capable of as an artist. When I conceded to their flow, the Faroe Islands showed me beauty in jaggedness, euphoria in unpredictability and reverence that comes with grandeur.

The Belgians were using this backdrop as the inspiration for their work and following their imaginations. And now the islands were giving me the spark that I’d subconsciously been seeking. I had become tired of editing my voice to fit other people’s platforms. I saw my youth reflecting back at me and realised my craft had become predictable and safe. I’d let time box that creative person in.

I suddenly found myself angry and disappointed at myself. I was sitting across from Charlotte who studied me with concern, watching these emotions play out across my face.

“I was supposed to come here with you,” I finally said, locking eyes with hers. She nodded, revealing an acknowledging smile.

That was all I needed to say. 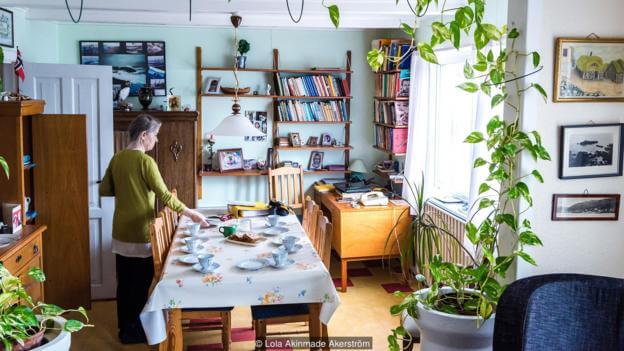 An hour later, Tróndur gave us a ride back to Streymoy Island on his fishing trawler. Rain began to fall hard, darkening the sky and leaving Hestur a resting giant in the mist once again.

As I drove back to my hotel, snaking along that same steep coastline, my mind wandered back to Hestur. I had rediscovered what it meant to surrender to one’s own creativity and voice. More importantly, I remembered just how contagious and inspiring raw passion is to others.

With a knowing smile, my right foot left the brake pedal and I hit the accelerator, pushing past funeral speed.