When people first settled Nördlingen, Germany, they thought they were living in a volcanic crater. But the unique landscape was formed by something otherworldly.
As I climbed the narrow staircase of the gothic church tower in Nördlingen, Germany, the worn stone steps appeared to glimmer in the sunlight, bringing unexpected flashes of light to what should have been a dark, grey climb to the top.

“That’s because the entire tower is made out of suevite stone, and enclosed in it are small diamonds,” Horst Lenner, the tower watchman, told me enthusiastically.

“Luckily they’re very, very small, otherwise the tower would’ve been taken down a long time ago,” he joked, a wide smile unfolding across his face.

Although light-hearted, Lenner’s words are true. During construction of the town, which was first mentioned in records in the 9th Century AD, the settlers didn’t realise the stone they were using was embedded with millions of tiny diamonds, in a concentration seen nowhere else in the world.

As I looked down on the sleepy Bavarian town from the top of the tower, it was hard to picture the area as being anything other than tranquil. It was, in fact, a violent and otherworldly event – an asteroid strike that hit 15 million years ago – that led to the strange reality of Nördlingen becoming Germany’s diamond-clad town.

Travelling at an estimated 25km per second, the 1km-wide asteroid slammed into the ground with such force that it not only created a 26km-wide crater in which the town lies, but subjected the bedrock to such intense heat and pressure that the bubbles of carbon within it transformed almost instantaneously into tiny diamonds all less than 0.2mm across – barely visible to the human eye. 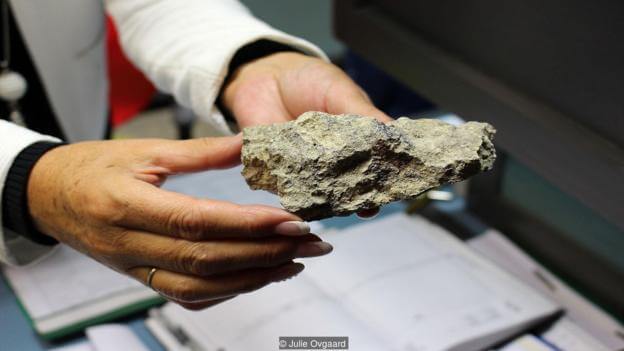 With no knowledge that the rock, called suevite, was peppered with diamonds, the buildings were made almost entirely with the gem-laden stone – making Nördlingen like no other town on Earth.

“Everything within the city wall is made from that asteroid impact rock,” said Nördlingen resident Roswitha Feil.

Even more bizarrely, it wasn’t until relatively recently that Nördlingen residents learned the origin of their crater. 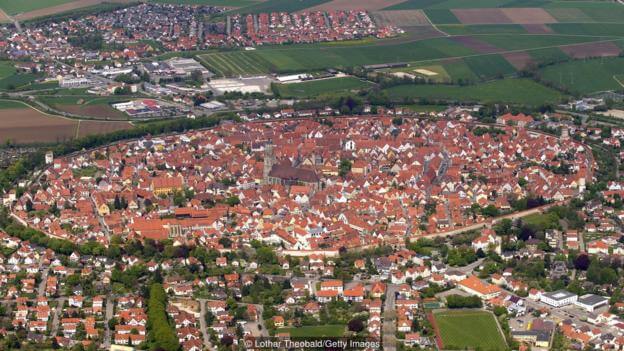 Never paying much notice to their homes’ shimmering quality, locals had always believed that Nördlingen was built in the crater of an extinct volcano until US geologists, Eugene Shoemaker and Edward Chao, visited the town in the 1960s. After studying Nördlingen’s landscape from afar, the scientists noticed the crater did not meet exact criteria for a volcano, and travelled to the town to test out their own hypothesis: that the land had instead been shaped from above rather than below. It didn’t take long for the scientists to prove their theory correct; they needed only to inspect the wall of Nördlingen’s church to discover the clusters of minute gemstones.

“The school books taught that the land was the way it was because of a volcano,” Feil said. “Then it was discovered that it was from an asteroid, and they had to change all the school books.”

Not long after Shoemaker and Chao first visited Nördlingen, it was estimated by local geologists that the town walls and buildings contained approximately 72,000 tons of diamonds. Although suevite can be found in other parts of the world from similar impacts, nowhere is the gemstone concentration as high as it is in Nördlingen.
After descending the steps from the top of the tower, I meandered through the town’s quiet streets. It was a chilly day, but I was protected from the biting Bavarian breeze by colourful townhouses and the old defensive wall that encircles Nördlingen. Whenever the sun broke free of the clouds, shimmering diamonds embedded in walls would catch my eye. 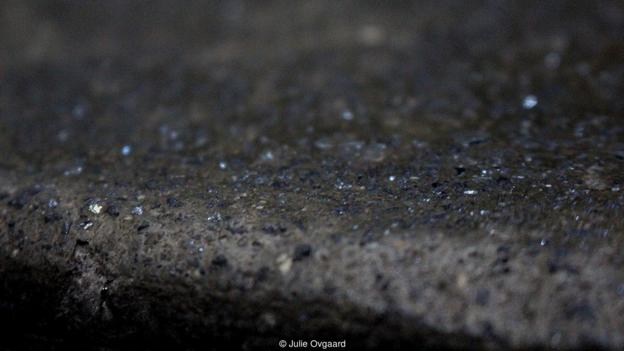 “It’s quite unique,” said Dr Stefan Hölzl, geologist and director of the RiesKrater Museum. Housed in a 16th-Century barn, the museum educates visitors on how the asteroid impact shaped the town’s future. Throughout its six rooms, display cases are filled with pieces of meteorite and, of course, suevite.

“You have some places in the world where this sort of asteroid impact material has been used for buildings, but nowhere near this amount,” Hölzl said as we moved from case to case. “Here it was used to build the whole town.”

And it’s not just the buildings that reflect that event millions of years ago. Outside the wall, Jurassic-like conifer and pine forests rim the crater’s edge, nourished by the extremely fertile soil that once sat at the bottom of a salt lake formed in the aftermath of the asteroid strike. Peppered across the landscape lie abandoned mineshafts and quarries from which the suevite was extracted.

Hölzl told me that Nördlingen’s crater is so distinctive that the Apollo 14 and Apollo 16 astronauts visited in the run up to their moon missions to learn about what sort of rocks they could find in space, and which ones they should bring back to Earth. 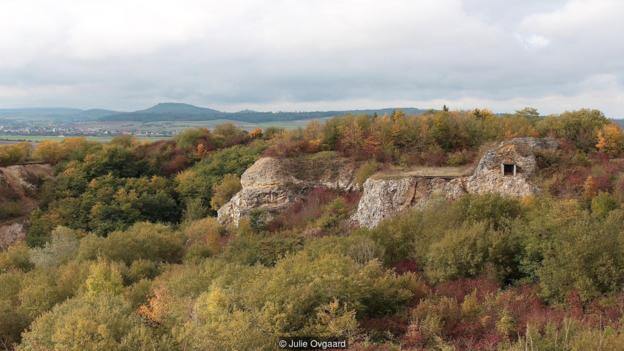 “We still get visits from Nasa, and astronauts from the European Space Agency were here just two weeks ago,” Hölzl told me proudly. He led me to a room on the museum’s ground level, where a moon rock, a souvenir from one of the Apollo space missions, sat on display.

Yet despite this, many in town remain indifferent about living among millions of tiny diamonds. As one woman told me as I emerged from the church: “We see it every day, for us it’s nothing special.”

For Hölzl, who moved to Nördlingen from Munich, the idea that people would not be captivated by the unique geology and history is alien to him. “They don’t think that it’s something interesting. They wonder why people would come here to visit,” he lamented.

Like the moon rock, Hölzl considers Nördlingen to be exceptional.

“The reality is that everything [in Nördlingen] is connected to this event millions of years ago. It may be in the past but you still see it now,” he said. “The present is a product of the past.”