When I landed at Alfonso López Pumarejo airport just south of Valledupar, the capital of the César region in northern Colombia, it was the first time in 12 years that I had been back to my father’s homeland. The intense tropical heat hit me like a tidal wave, soaking me in sweat the moment I stepped outside. Maybe it bothered me less when I was 16, but I have since grown accustomed to Germany’s crisp climate.

“Aqui señor, aqui!” A dozen taxi drivers vied for my business the moment I set foot on the pavement outside the arrivals gate. Desperate to escape the cacophony, I sought refuge in the closest taxi, and with the radio at full volume, we began the hour-long drive south to the village of Codazzi, my father’s hometown. With the windows rolled down, the thick Colombian heat filled the taxi, colliding with the energetic notes of vallenato, northern Colombia’s traditional folk music.
The voice emanating from the speakers was that of a man desperately trying to win back the heart of his lost love. His forlorn lyrics – Vuelve mi amor, Vuelve! (Come back to me darling, come back to me!) – were accompanied by the reedy notes of an accordion. “People here don’t tell stories – we sing them with the sound of accordions,” said Emilio, my taxi driver, with a smile on his face as he turned up the volume and starting to sing along. 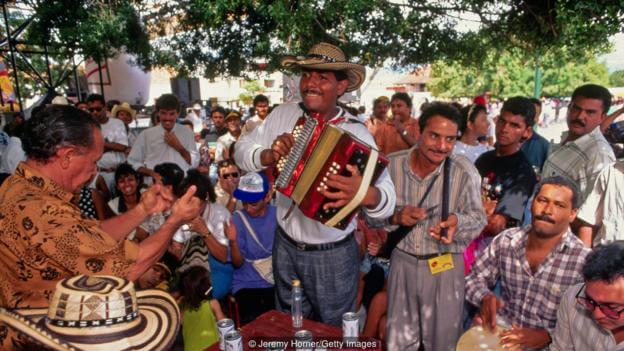 Even without the accordion’s hum filling my ears, its influence was hard to miss. César’s streets were littered with murals and monuments depicting the pleated instrument, and its wheezing melodies seemed to ooze from every open window.

My father had always loved vallenato music, so I wasn’t shocked to discover that it was the soundtrack to life in his boyhood home. What is surprising, however, is that the driving force behind Colombia’s acclaimed folk music is not Colombian at all – it’s German.

The accordion travelled to Colombia in the mid-19th Century aboard German merchant ships that landed at La Guajira, the northernmost tip of South America. The German sailors traded their musical instruments with Colombians in exchange for food and other wares. When the Germans set sail for home, they unknowingly left behind the foundations of a lasting legacy: it didn’t take long for local troubadours to incorporate the accordion into their repertoires, and Colombian poets followed suit.
Soon, the accordion become an ensemble instrument. Musicians paired its distinct sound with those of local instruments, like the caja (a Colombian version of a bongo drum) and the guacharaca (a ribbed wooden instrument you rub with a fork to produce a vibrating sound), replacing the gaita (Colombian flute) as the primary instrument in folk music. Although French and Italian accordions also found their way to Colombia, it was Germany’s Hohner-brand diatonic accordion that best suited the average Colombian singer’s vocal pitch.

The upbeat rhythms and poetic lyrics of vallenato quickly attracted a fierce following, and today, more than 150 years after its arrival in the country, the German accordion has become an integral part of Colombian storytelling. Twentieth Century Nobel Prize-winning author Gabriel García Márquez declared himself a big admirer of the genre – he even dubbed his masterpiece, One Hundred Years of Solitude, a ‘vallenato song of 400 pages’. Today, kids across Colombia ask for accordions for Christmas.

As my cousin Cocho and I sipped Scotch – a surprisingly common drink in this part of the country – in front of his house in Codazzi, more than a dozen neighbours stopped by to greet us, some even sitting down to share a drink and a story.

“Did you know Francisco ‘El Hombre’ defeated the devil playing the accordion?” one asked while refilling my glass. “Of course. He was the best accordion player in history,” I responded, remembering the many times my father told me the story as a kid. The vallenato musician was returning home from the city of Riohacha on the La Guajira coast when the devil appeared and challenged him to an accordion duel, which Francisco won. It was just one of many regional tall tales starring accordion players.

The next morning I followed my family east of town to the banks of a slow-moving river, where Codazzi residents regularly gather for lunches of sancocho, a soup made with pork, beef, chicken, potato and plantain. In the shade of mango trees, families crowded around mixing bowls and cutting boards, their hips swaying to the punchy vallenato melodies pouring from portable radios. “Turn that volume up!” my 83-year-old grandmother demanded, her hands deftly wielding a paring knife that vanquished one potato after the next. It seemed like everyone was competing for the title of loudest and most festive. 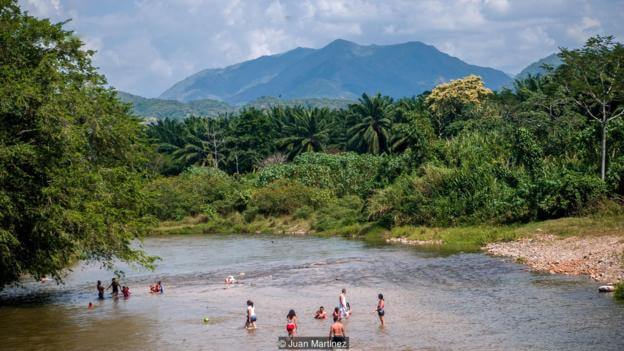 Later that afternoon, I joined my cousin Daniel for a swim in the river. “You can’t leave Codazzi without attending a piqueria [a ‘duel’ between two accordion players],” he told me as we floated lazily. “Let me take you tonight.”

I could hear the bellow of the accordions before I even entered the venue. People cheered while the musicians’ hands flew over the keys, releasing a complex string of notes as they pumped life into the instrument with the rhythmic push and pull of its flexible body. When one contestant finished, his competitor responded with a verse even more complicated in an attempt to mock his opponent. Although this was an amateur competition, you could see these contenders had been playing the accordion their whole life. As naturally as breathing, the musicians filled the accordions’ bodies with air and expelled it to release detailed musical phrases that delighted their audience.

César is not the only region that celebrates the sounds of the accordion; vallenato has spread throughout the rest of the country. In 2015 it was inscribed on Unesco’s list of Intangible Cultural Heritage, and Colombians commemorate their love of the music every spring at the Festival de la Leyenda Vallenata.

I was raised on vallenato – I even studied the accordion as a child. But after living in Germany for more than eight years, my appreciation for the genre had waned. Several days later when I boarded my flight back to Europe, the sounds of accordions were still ringing in my ears. This time I would be more careful not to leave this part of my culture too far behind.